Dual-listed Asanko Gold has acquired ownership of the Miradani Mining Lease which is adjacent to the Asanko gold mine in Ghana, West Africa from AngloGold Ashanti.

Acquisition costs borne by Asanko Gold for the Miradani project, which bear standard Government of Ghana royalty interests, are not disclosed and are not material.

Covering an area of approximately 15 km2, the Miradani project is on an existing mining lease (valid until May 2025) which will enable potential mineral resources to be accelerated to production.

The northern boundary of the concession is located approximately 5.5 km south of the Asanko gold mine’s processing plant on the NE-SW Asankrangwa structural corridor.

The under-explored Asankrangwa gold belt is about 7 km wide and over 50 km long.

The area is highly prospective with multiple geo-chemical anomalies aligning with the structures interpreted from the airborne VTEM and magnetic surveys completed by Asanko Gold in 2015.

Asanko Gold holds the largest land package on this belt and it hosts all of Asanko Gold’s 5.1 million oz of reserves. 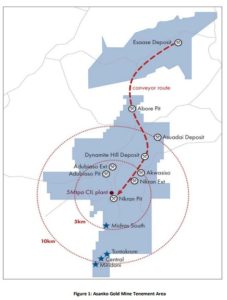 A phased drilling campaign is expected to commence in Q4 2017, with a view to completing a maiden mineral resource estimate in H2 2018.

Historical trench and soil geochemistry data, along with recent mechanised artisanal mine workings; indicate that each target area consists of multiple parallel mineralogical zones, individually ranging between 3 m and 37 m in width. Individual 1.5 m trench samples assayed up to 47,3 g/t.

“The Miradani project is a very exciting exploration project with huge potential to increase our resource base and contribute to our future growth,” states Asanko Gold president and CEO, Peter Breese.

“Located next to our current operation and within trucking distance, the Miradani project comes with the advantage of being on an existing mining lease, which means that we will be able to accelerate the development timeline from resource delineation to production.

“Historic trenching indicates there are at least three main zones of mineralisation across the project area and the extensive artisanal workings confirm gold is present.

“We have identified three drill ready targets which we will start to drill in the coming quarter and we look forward to updating the market further during H1 2018.”

The Asankrangwa belt is defined by NE-SW trending primary and secondary lineaments providing conduits for gold bearing fluids and sites for metal deposition.

The Miradani project is underlain by the lower Birimian system (meta-sediments) of the Kumasi Basin generally consisting shallow marine of siltstones, sandstones, shales and volcaniclastics, and are intruded locally by sizeable mica-rich granitoid plutons.

The meta-sediments are regionally metamorphosed to greenschist facies and sometimes host disseminated sulphides and carbonates.

Pyrite, the most prevalent sulphide, is most often oxidised to limonite or leached out leaving cubic casts.

Meta-sediments of the Kumasi Basin have well developed schistosity parallel to bedding and striking northeast usually between 25° – 35° and often dip steeply to either northwest or southeast.

Deposits generally occur at or near intersections of deep crustal primary and secondary shear zones, or in flexures in the shear corridors.

The structural architecture and controls on mineralisation of the Asankrangwa Belt has been extensively studied and interpreted by Asanko Gold.

This understanding forms the basis for all prospectivity studies and exploration targeting.

Major primary shear structures pass through the Miradani project and the target areas are located at the intersection of secondary structures.

These primary structures are parallel to similar structures hosting all of the other Asanko gold mine deposits.

The SW (Miradani), Central, and NE (Tontokrom) portions of the Miradani project are highly prospective and contain extensive historic gold in soil anomalies and fall at areas of structural complexity.

In addition to the Miradani targets, multiple other high priority exploration targets have been identified in areas of coincident structural complexity and geo-chemical anomalies. 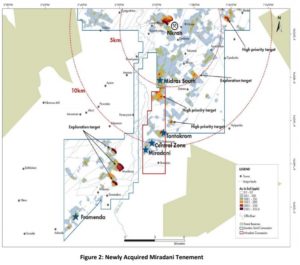 Three walk up drill targets have been clearly defined from historic trenching and soil geochemistry results as well as intensive mechanized artisanal mining.

All known mineralisation on the Miradani project is within 11.5 km of the Asanko gold mine processing facility.

The Fromenda Shear in particular displays strong indications of multiple mineralised zones along the entire 3.2 km strike within the Miradani project.

The extensive artisanal workings are on alluvial, colluvial, and hard rock deposits and the depletion of oxide resources is expected in places.

This trend, referred to as the Miradani Trend, is shown below: 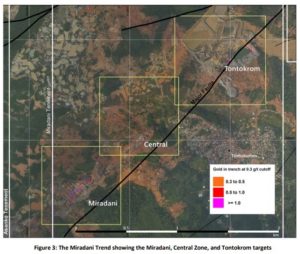 Asanko Gold has not had access to the full historical data or the QAQC around such data and therefore no mineral resource or mineral reserve estimates can be inferred from the historic data presented below.

The historic work conducted on the Miradani project area is supplied for information purposes alone.

Asanko Gold will be conducting a comprehensive drilling program across the project area to delineate a mineral resource estimate.

The Miradani project area has been a target for exploration since the beginning of the 20th century.

From 1900-1914, Ashanti Rivers and Concession did intensive exploration on the Miradani area but no records of their work survived to this day except a map of an adit in which 10-13dwts (1dwt=1.56 grams equal to or greater than 15 – 17 g/t Au) gold was reported over 1 m sampling intervals of quartz veins.

Between 1994-1996 Ashanti Goldfields (AGC) carried out soil geochemistry on a grid pattern of 200/400 x 20 m and various trenching programs along a 13.5 km strike across the Miradani and Datano mining leases.

Trench intercepts were generated using a 0.3 g/t Au cut-off, a minimum intercept of 3 m, and no more than 3 m of internal waste.

Historical assay and QAQC information is not available but through ground confirmation, the locations of the trenches were verified.

In addition to ground truthing, the fact that the artisanal mine pits match exactly the mineralisation intercepts and trends observed in the trench data provides Asanko Gold with no reason to doubt their accuracy and will act as a guide for follow up drill testing.

AGC were able to delineate a NE-SW trending anomaly consistent with their structural interpretations.

Up to five mineralised lenses ranging between 3 and 37 m width and gold grades of 0.5g and 47.3g/t were encountered.

During 2015 Asanko Gold completed a helicopter borne VTEM survey over the Asankrangwa belt, including the Miradani project.

2D and 3D geological and geophysical interpretations and associated prospectivity and targeting exercises of the Asankrangwa structural corridor highlighted the Fromenda shear zone, and especially the Miradani/Tontokrom area as a highly prospective corridor.

The Miradani target is the furthest south west target on the trend.

27 historical trenches were dug on the Miradani target, of which 22 were crossed the trend.

Of these, 15 recorded significant intercepts over a strike of approximately 300 m.

Post trenching, mechanised artisanal mining has appeared to increase the strike by an additional 200 m, which will require further verification by the Asanko Gold exploration team. 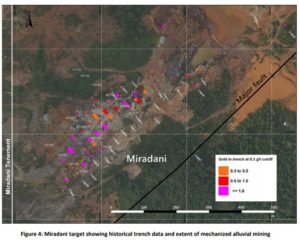 The photo shows the extent of intensive mechanized artisanal mining which has delineated areas of potential mineralization.

Both the trench data and artisanal mine workings indicate that there are multiple parallel trends at the Miradani target.

The Central Zone Target, aptly located between the Miradani and Tontokrom targets, has had 12 trenches dug in the area, of which four were excavated on or near the trend. 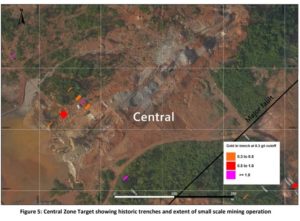 While the Central Zone target does not appear to have the width of the other two targets, it appears to be continuous along strike.

The Central Zone is separated from the Miradani target to the southwest by a low lying area which has subsequently been filled with artisanal mining tailings and it is likely that it is an extension of the Miradani Trend.

The Tontokrom target has had the least amount of trenching, but the most amount of mechanised artisanal mining.

Five trenches were dug in the Tontokrom area, with four crossing or coming near to the mineralised trend. Tontokrom has been subjected to organised and sustained small scale mechanised mining activity for over 25 years.

What remains of their activities is a benched pit estimated to be approximately 30 m deep and over 200 m in strike. 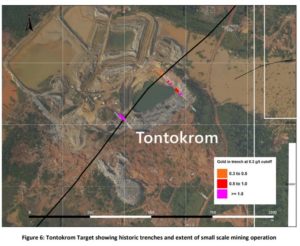 The pit has since filled with water but intensive small scale mining has continued on the edges and along strike indicating multiple zones of mineralization and strike continuation.

The Tontokrom deposit appears to be hosted within a granite intrusion coincident with the structure and in the sediments surrounding it which suggests analogies to both Nkran and Akwasiso.

Asanko Gold is optimistic about the large-scale potential of the Miradani project based on the historic work by AGC (now AngloGold Ashanti) as well as the large scale mechanised artisanal workings, which were focused on alluvial, colluvial and in-situ mineralisation.

The first three exploration targets have been identified and are “walk-up” drill ready targets, Miradani, Central and Tontokrom.

Following the recent government initiative to curb illegal mining in Ghana this year, all mechanised artisanal mining has ceased on the Miradani project.

Community engagement is underway and this will be completed ahead of the drill program, which is expected to commence in Q4 2017.

A maiden mineral resource estimate is targeted for H2 2018.