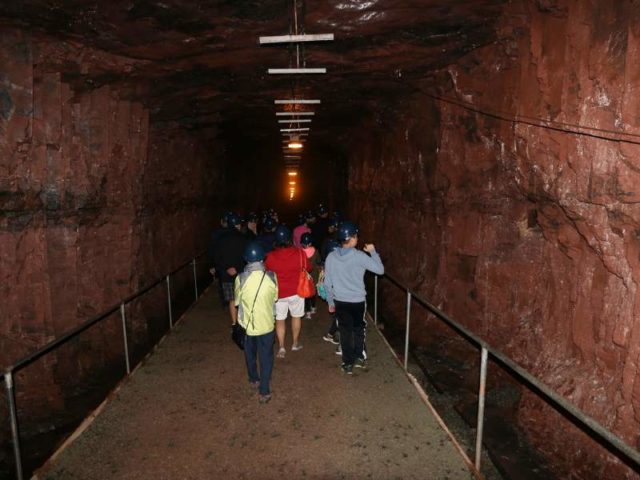 In the complete darkness gentle woman’s’ voice sings about hardship of working in an iron mine. For 30 seconds Bonnie, our wonderful tour guide, turns the lights off to give us a feeling of where we truly are – in the mine.

It’s a bit chilly down here, so it was good that I took a jacket – Newfoundland summer is raging outside – yes, it happens! There ARE summer days in Newfoundland – but here, down deep, advice to wear a jacket, given on the mine museum website, is much appreciated.

Of several mines on Bell Island only one remains open, and only as a museum.

Bonnie is third-generation mine worker, but she is grateful to not have to shovel. Shovels, now on display throughout the tour route, made a big mine.

Over 100 km of underground tunnels, and not just squirmy narrow passages – no, the tunnels are tall and wide, as the iron ore body is thick – up to 4m!

It is also very consistent – the mine has a feeling of a modern mine – it looks so comfortable. But looks are deceiving.

Bonnie says this mine was never “modernized”. This dry expression does not convey the image of mass of rock that was – shovel by shovel – loaded into rail cars – 20 cars per person per shift!

Tunnels go down far under the sea, as the ore body dips at 100.

Pillars are getting thicker, more and more ore has to stay to support the roof.

But the grade – about 50% Fe – allowed mining to continue to be profitable even at these depths and distances.

During WWII German U-boats attacked and sunk three iron ore carriers and even fired at the loading dock, making Bell Island the only landmass in North America to be directly hit by Germans.

For over 60 years miners blasted their way in shoveled their way out. But now all is quiet under Bell Island – the last mine closed for business in 1966.

The mine museum has excellent display of artifacts, maps, photographs, and this great underground tour. Visitors can enjoy a pleasant ferry ride to Bell Island on a sunny day.

After chilly mine visit - they can get a cup of special Miner’s Blend Coffee at the cafeteria. And long after you leave, you will remember the woman’s voice singing about hard long days in the mine, as you shiver in the darkness.

It was not until the 1890s that the Bell Island deposits drew serious attention from professional mining interests.

By 1892, the deposits had come under control of the Butlers of Topsail, who brought in agents of the New Glasgow Coal, Iron and Railroad Company (later called the Nova Scotia Steel and Coal Company) to begin developing the site.

Thomas Cantley, Secretary of Nova Scotia Steel and Coal, called the minesite "Wabana", which is believed to be an Abenaki Indian word meaning "the place where daylight first appears", and mining began in the summer of 1895.

The Wabana ore deposit was vast, of high quality, and close enough to the Cape Breton Coal fields to feed the giant steel mills in Sydney, Nova Scotia.

Bell Island ore was also shipped to more distant parts of the world, such as the United States and Germany.

The iron mines drew Bell Island into the international network of the mining and steel industry, and over the period of mining operations (1895-1966), distant powers and events shaped much of the history of the mines and of the island itself.

In 1899, a second company joined Nova Scotia Steel and Coal when the Whitney Company (later called the Dominion Steel Corporation) purchased rights to the large "lower bed" of ore that lay under the Scotia company's "upper bed".

Both of these beds ran under the sea floor of Conception Bay, and after surface mining had exhausted the easily accessible ore, workers began the giant task of reaching and extracting these submarine beds.

The submarine slopes were begun in 1905, and the Nova Scotia holdings were reached in 1909. By 1911, Nova Scotia Steel and Coal owned about 32 square miles of submarine beds, while the Dominion Company held about 8 square miles.

By 1951, miners were working three miles out under the sea. The minimum allowable mine ceiling - in this case the minimum thickness of the sea floor which formed the roof of the mine - was 200 feet. In some places, it was up to 1 600 feet.

While operations for the most part seemed to run at a steady and at times an expanding pace, there were periodic setbacks.

The outbreak of the First World War, for example, was a serious blow, since Germany had been one of the chief consumers of Bell Island's ore.

The occupation of Germany's highly industrialized Ruhr Valley by France in 1923 had a powerful effect. A decade after the end of the War, the Great Depression undercut both the demand for iron ore and its price.

The period from 1936 to 1959 saw steady recovery. Although one of the mines was shut down in 1950, leaving three in operation, mine modernization projects seemed to spell prosperity.

At the time of its closure, Bell Island was Canada's longest continually operating mining project.

Since the mines opened, 78, 989, 412 tons of ore had been shipped, to Canada, West Germany, the United States, Belgium and Holland. Until the 1950s, Bell Island was the sole source of iron for the Sydney steel mills.

There are still, reportedly, vast bodies of iron ore remaining, but to date no company has made a serious attempt to re-open the mines.