Coal of Africa transformed into a coal producer by Uitkomst acquisition

“I am pleased to report on another extremely positive quarter for Coal of Africa as we integrated the Uitkomst colliery into our portfolio and advanced the sale of the non-core Mooiplaats Colliery, resulting in its disposal at the end of September 2017,” comments Coal of Africa CEO, David Brown.

“The Uitkomst acquisition transformed Coal of Africa into a coal producer and we are now well positioned to take advantage of higher global coal prices. 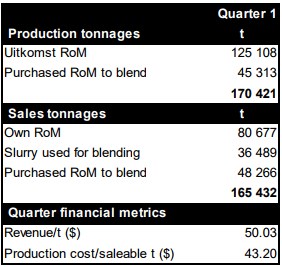 “The review of the Makhado project resulted in the Coal of Africa directors approving the Makhado Lite project.

“Makhado’s rationalised production profile significantly reduces execution risk and will ensure that our flagship project is brought into production faster than previously anticipated with a lower capital expenditure,” continues Brown.

“The Makhado Lite project has the requisite regulatory approvals and Coal of Africa is working to secure access to two key properties that allows us to complete the confirmatory geo-technical work required before construction commences to ensure the project footprint is appropriately positioned.

“Coal of Africa anticipates that this will be resolved in either late H1, FY2018 or early H2, FY2018 with construction following in H1 FY2019.

“The accelerated build-plan positions Makhado to be able to take advantage of higher hard coking and thermal coal prices, delivering positive returns for shareholders in the near-term,” adds Brown.

Coal of Africa’s Uitkomst Colliery employs approximately 520 employees and reported no LTI’s during the quarter.

Uitkomst is a high grade thermal export quality coal deposit with metallurgical applications, comprising an existing underground coal mine and a planned life of mine (LoM) extension.

The Uitkomst Colliery has the required environmental and social permits in place and a remaining 17 years LoM.

The colliery currently mines the south adit and has applied for an amendment of its integrated water use licence (IWUL) to include an adit to the north for its LoM extension.

The south adit comprises two underground sections and during the quarter Uitkomst mined through two dykes in section 2, adversely affecting production but with October 2017 production much improved the colliery expects to rectify the shortfall during the next two quarters.

The colliery generated 125 108 tons of run of mine (RoM) coal during the quarter resulting in sales of 80 677 tons while slurry processed at the wash plant yielded sales of 36 489t.

RoM coal purchased from nearby collieries and sold directly after blending added sales of 48 266 tons.

The additional costs incurred to mine through the dykes resulted in mining costs per tonne being higher than anticipated.

Uitkomst sells sized coal (peas) products and the 0 to 40 mm product is sold into the domestic metallurgical market for use as pulverised coal while peas produced at the colliery are supplied to local energy generation facilities.

Uitkomst’s marketing strategy ensures that it is positioned to take advantage of higher international coal prices and weakening of the South African Rand.

In order to meet the requirements of the South African Mining Charter, Coal of Africa is in the process of selling an additional 21% interest in Uitkomst to BEE shareholders at the same value it acquired the colliery.

The sale will be on a vendor financed basis. 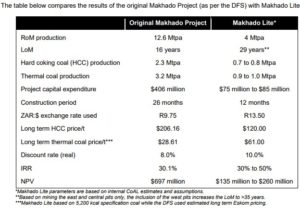 The Makhado project in the Soutpansberg recorded no LTIs (FY2017 Q4: nil) during the quarter. Coal of Africa remains committed to the sustainable development of the Makhado project recognising its potential to drive significant socio-economic transformation, seeking co-operation between mining, agriculture and heritage land uses.

The regulatory processes governing mining are complex and time consuming and Coal of Africa has secured a New Order Mining Right (NOMR), IWUL and, an Environmental Authorisation (EA) for the Makhado project, ensuring it has the required permits to commence construction.

Coal of Africa requires access to the key Lukin and Salaita farms to confirm geo-technical information prior to the construction of Makhado, and final resolution of this matter remains outstanding.

Coal of Africa strives to unlock near-term shareholder value from its flagship Makhado Project and this resulted in an assessment of the 2013 Makhado Project Definitive Feasibility Study (DFS).

During the quarter the directors of Coal of Africa approved the revised Makhado development plan resulting in reduced capital expenditure, a shorter construction period leading to earlier than planned production, an extended LoM and, an amended sales and marketing strategy.

Makhado Lite is expected to deliver similar, positive internal rate of return despite the proposed lower output and required updates to costs used in the DFS, with proposals for full mining services sourced from various contract mining companies while turnkey processing plant construction and operating quotes were obtained from potential service providers.

The capital required to complete this was $281 million while estimated peak funding to develop Makhado Lite will be between $90 million and $110 million with a project payback period of four years.

The revised strategy anticipates that Makhado Lite will be constructed in 12 months and allows for future expansion of mining and processing if appropriate. It is anticipated that the project will produce approximately 1.7 Mtpa of saleable coal, comprising 0.7 Mtpa to 0.8 Mtpa of hard coking coal and 0.9 Mtpato 1.0 Mtpa of export quality thermal coal.

The DFS envisaged supplying thermal coal to Eskom, the state power utility, while Makhado Lite will generate export quality thermal coal which could be sold internationally.

Coal of Africa has commenced hard coking and export thermal coal off-take discussions with various parties and expects that a substantial portion of Makhado’s hard coking coal will be sold locally with the balance sold on international markets.

The Mooiplaats Colliery near Ermelo remained on care and maintenance throughout the Quarter.

The continued commitment to delivering a successful Mooiplaats Colliery sale transaction resulted in Coal of Africa signing sales agreements post the end of the quarter.

The suspensive conditions related to the sales transaction are expected to be completed during Q2 FY2018 and will result in 100% of the Mooiplaats Colliery equity and claims being disposed of for R179.9 million ($13.3 million).

The Vele Colliery in Limpopo remained on care and maintenance throughout the quarter and no LTIs were recorded during the period (FY2017 Q4: nil).

Coal of Africa awaits the granting of an IWUL by the Department of Water and Sanitation, the final approval required to complete the regulatory approvals process for the stream diversion in respect of future mining.

Once all regulatory approvals are in place, Coal of Africa will be in a position to consider prevailing market pricing and the ability to finalise profitable off-take agreements in order to conclude an investment decision on the requisite plant modifications.