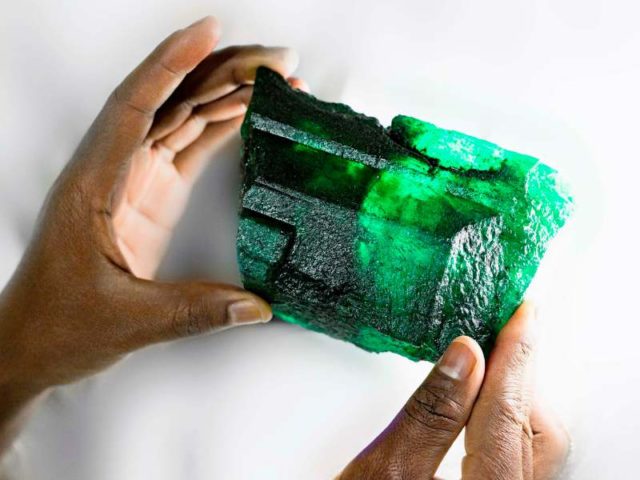 Kagem Mining has discovered an exceptionally rare high quality 5,655 carat (1.13 kg) emerald crystal at its mine in Lufwanyama.

The emerald – dubbed ‘Inkalamu’, the Lion Emerald – shows remarkable clarity with a perfectly balanced golden green colour, and is already creating a buzz in the global gemstone industry ahead of its auction in Singapore next month.

Inkalamu was discovered at Kagem, the world’s largest emerald mine, which is 75% owned by London-based Gemfields and 25% by the Zambian government through the Industrial Development Corporation of Zambia.

“The discovery of this exceptional gemstone is such an important moment both for us and for the emerald world in general” comments Gemfields’ London-based gemmologist Elena Basaglia..

“We are experiencing strikingly increased demand for high quality Zambian emeralds from the major brands, particularly in Europe, all of whom admire the rich colour and unique transparency of our gems – qualities that make them unique among emeralds.

“It’s difficult to estimate how many individual gems will be cut from Inkalamu, but the cutting expertise of Gemfields’ auction partners will mean that this gemstone will make its mark in the history books of exceptional gemstones. This lion’s resulting offspring – ‘The Pride of Inkalamu’ so to speak – will continue the legacy for generations to come!”.

Inkalamu was discovered in the eastern part of Kagem’s largest open-pit mine at 10.15am on 2 October 2018 by geologist Debapriya Rakshit and veteran emerald miner Richard Kapeta, who has more than a decade of experience mining Zambian emeralds for the Gemfields group.

This area of the mine has proven to be particularly fertile in recent months with the Kagem team recovering several significant crystals there, but none with the combined size, colour and clarity of the Lion Emerald.

The naming of uncut emeralds is a tradition reserved for the rarest and most remarkable gems.

While no official records exist, perhaps two dozen have merited their own name and with the majority weighing less than 1,000 carats. Gemfields last named an emerald in 2010 when it unveiled the ‘Insofu’ or ‘elephant’ emerald.

On this occasion, Gemfields chose ‘Inkalamu’ (meaning ‘lion’ in the local Bemba language) in honour of the work carried out by two of Gemfields’ conservation partners, the and the Niassa Carnivore Project in Mozambique.

These partners work tirelessly to smooth the relationship between Africa’s carnivores and local communities across vast, remote and challenging areas.

The health of carnivores, being at the apex of the food chain, is widely regarded as a good indicator of the health of the wider eco-system.

Gemfields has three-year philanthropic sponsorships with each organisation in order to aid them in wildlife conservation, promote community development and stem the problem of poaching by developing alternative livelihoods.

In addition, Gemfields will divide 10% of Inkalamu’s auction proceeds equally between the two carnivore initiatives.

The Lion Emerald will be offered for sale at Gemfields’ next auction in Singapore in November 2018 to approximately 45 approved auction partners, chosen by Gemfields for their shared values in responsible practices. In contrast to the diamond industry, the price for exceptionally large emeralds like Inkalamu is particularly difficult to predict.

The emeralds found in Gemfields’ Kagem mine were formed more than 450 million years ago when a rare combination of in situ minerals and surging magma from deep within the Earth’s crust encountered one another and supported just the right conditions for emerald crystal growth.

Given the value placed by end consumers on understanding the origin and journey of their gemstones, the Lion Emerald will benefit from the Gübelin Gem Lab’s ‘Provenance Proof’ nanotechnology whereby nano-sized particles encoded with the mine-of-origin will allow identification of the gemstone’s birthplace for decades to come.

As such, any purchaser of Inkalamu or its offspring (aptly named the ‘Pride of Inkalamu’), are provided with peace of mind that their magnificent emerald was responsibly sourced.