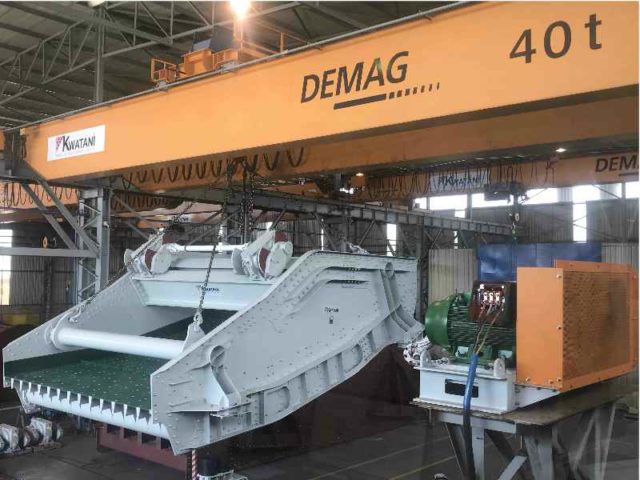 In the single largest order for vibrating screens secured from any mine in the past two years, Kwatani has shown its mettle by supplying some of the largest vibrating screens in Africa to the world’s leading opencast coal complex.

According to Kwatani CEO Kim Schoepflin, the contract comprised 44 large screens boasting widths of up to 4,3 metres.

“Our equipment may be large and heavy, but each individual unit has been customised for its specific application, to efficiently handle the ore required,” says Schoepflin.

“Moreover, the vibrating unit must be engineered to seamlessly fit into a new or existing building, and must operate in harmony with the rest of the processing plant,” she adds.

Among the larger units in the order were two double-deck, run-of-mine screens measuring 3 metres wide by 9 metres long, as well as three 2,4 metres by 6 metres degradation screens which will be installed in the mine’s drum plant.

Also being supplied are twenty three screens and three  vibrating pan feeders for the cyclone plant.

There are sixteen drain and rinse screens in the contract, four of which are generously sized at 4,3 metres by 7 metres, driven by two large gearboxes which deliver a centrifugal force of over 460 kN each.

“The successful handling of this magnitude of contract is a testament to Kwatani’s technical capability, as we can handle these larger contracts while continuing to service all our other customers,” she notes.

Schoepflin highlights the skills and passion of the company’s family of 160 employees, combined with its extensive and well-equipped manufacturing facility in Spartan near Johannesburg.

“The vibrating screen comprises of thousands of different parts and components, each requiring precision engineering and a number of fabrication processes, which at the end are carefully assembled by dedicated staff,” she comments.

She adds that Kwatani is the only OEM of vibrating equipment to engineer, assemble and test its exciter gearboxes in-house and at full load on its fit-for-purpose test bench – ensuring that every gearbox performs optimally before dispatch to a customer.