BMI Research,  a unit of Fitch Group, says the countries will benefit from large untapped reserves, numerous investment projects, and improving business environments. Despite this, security and political uncertainty in both countries will continue to pose headwinds to the positive outlook.

Mali and Côte d’Ivoire will emerge as the mining industry value growth outperformers among all major mining producing countries in Africa in the coming years. A strong project pipeline and huge untapped reserves will boost Mali’s mining sector, while a favourable regulatory environment and solid infrastructure developments will be the key drivers of Côte d’Ivoire’s growth prospects in the coming years.

Starting from a relatively low base, BMI forecasts Côte d’Ivoire and Mali to post average annual mining industry value growth of 15.6% and 10%, respectively, over 2017 to 2021, putting them above the likes of top mining markets such as the DRC. 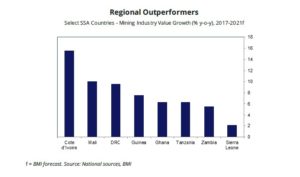 Mali’s Ministry of Mines estimates that the country holds approximately 822 t of gold reserves as of February 2017. However, only about six of Mali’s 133 potentially gold-rich reserves have been mapped out, offering significant growth opportunities for the country’s mining sector.

Mali comes second in Sub-Saharan Africa in number of new gold projects according to the BMI Mines Database, with six projects currently in operation or in construction. While Burkina Faso tops the list, Mali will benefit from major projects due to come online in 2017.

At the same time, the country’s flagship Loulo-Gonkouto mining complex, owned by Randgold Resources, aims to produce over 600 000 ozpa for at least the next decade. 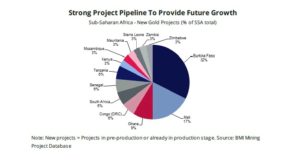 Côte d’Ivoire’s progressive mining code introduced in 2014 and on-going infrastructure improvements will make the country one of the more investor friendly countries in the region and will incentivise exploration investment in the coming years.

The new code introduces greater transparency in the permit allocation procedures, making it less likely that government officials with a role in the management of the mining sector will be able to take an interest in a mining company.

Other key revisions include the extension of exploration permits to 10 years (up from seven previously) and the removal of the additional profit tax which used to be payable by permit holders at 7% of turnover. These changes have pushed Côte d’Ivoire to third place in BMI’s Mining Risk/Reward Index, ahead of South Africa. 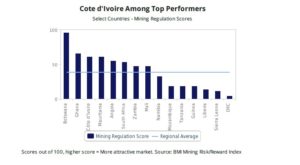 Moreover, BMI’s infrastructure team forecasts a strong annual average growth of 6% in Côte d’Ivoire’s construction sector over our forecast period up to 2026 as the government ramps up infrastructure spending in the coming years, while foreign investment pours into the country’s port system.

Most importantly the country is developing into a regional power hub, already exporting power to countries across the West Africa region, and the government has committed to double capacity by 2020 in hydropower, gas and coal. Considering the widespread challenges relating to power shortages for miners in the region, these measures will prove to be especially favourable in attracting future investment into the sector. 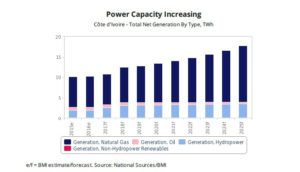 Foreign miners will continue to explore Côte d’Ivoire’s untapped gold reserves in the years to come. Randgold Resources has put the country at the forefront of its ‘Three In Five’ strategy in which the firm aims to explore and secure three projects in the next five years.

Furthermore, in September 2016, Endeavour Mining announced a discovery at the Ity gold mine in the Birimian corridor, which has the potential to extend the mine’s life by 10 years. Finally, Discovery and partner Toro Gold announced in December 2016 the discovery of a 17 km-long zone of gold deposits in the Ferkessédougou North permit.

Political and security instability to remain as potential headwinds

Despite the positive outlook for both countries’ mining industries, on-going concerns in the political environment of Côte d’Ivoire and security threats in Mali pose downside risks to current forecasts. In Côte d’Ivoire, BMI’s Country Risk team believes the possibility of political conflict following the expected departure of President Alassane Outtara in 2020 cannot be ruled out.

In particular, disenfranchised voters, social/ethnic divisions and the challenge of integrating demobilised soldiers will continue to cause tension and the potential for violence in the coming years. Given the long-term nature of this view, BMI highlights this scenario as a downside risk to the otherwise positive prospects of the country’s mining industry.

In Mali, the gold-rich regions of Kayes and Sikasso in the south of the country are largely out of reach of militant and terrorist conflict plaguing large parts of the central and northern regions. However the possible break-down of a delicate peace accord with with Tuareg-led separatist rebels could lead to another flare-up in conflict and open the possibility for Islamist groups ‘ activity to spread across the country, which would negatively impact gold production.

(The Tasiast open pit mine in Mauritania)