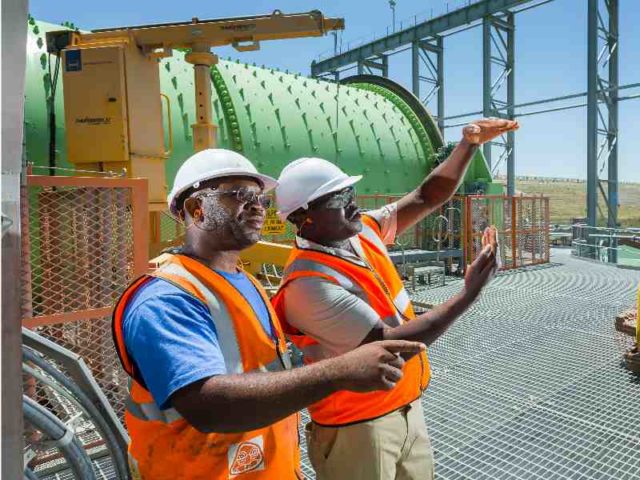 Anglo American Platinum’s large-scale Mogalakwena mine, located on the Northern Limb of the Bushveld Complex, is the type of asset every PGM miner wants to operate.

And while it already occupies the platinum major’s flagship status within its entire asset portfolio, CEO CHRIS GRIFFITH tells LAURA CORNISH that the company continues to evaluate the potential to enhance the operation’s performance further – through optimisation initiatives, the incorporation of digital technologies and even possibly a further expansion.

The Mogalakwena operation literally outshines every other PGM mine – in South Africa and across the globe.

Mining and processing at a production rate of 1.1 million PGM ounces per annum, it is the largest open pit platinum mine in the world.

“At existing production levels, delivered by some 1 800 employees, this means we have an asset that has a life over a 100 year of operating lifespan,” Griffith starts.

Established in 1993, the operation today comprises five open pits (North, Central, South, Zwartfontein and Sandsloot), all mining the relatively flat Platreef ore body recognised for its thick (80 m to 100 m in thickness) reef which is well above typical PGM reef thickness on the Eastern and Western Bushveld complex limbs.

All five pits feed two concentrators (North and South) as well as an off-site (on contract) Baobab concentrator as well.

While the scale and magnitude of Mogalakwena alone is enough to impress, the operation’s economics are equally notable.

“With comparatively few mining complexities, the mine is situated in the lowest quartile of the primary PGM producer cash cost curve. It boasts high margins which benefits from a high palladium revenue split (32% platinum, 37% palladium and 20% from base metals, 15% of which is from nickel). With significantly large volumes of palladium, it is profiting substantially from the rising palladium price.

The mine is also benefiting significantly from a team who is dedicated to ensuring Amplats derives maximum value from across the operation. “Mogalakwena’s performance over the last six years, up until our latest H1, 2018 financial period, demonstrates this perfectly,” Griffith highlights.

“We have in fact now exceeded nameplate capacity at both our concentrators by applying best operating practises and introducing a well-structured operating model which equates to a more than 35% volume increase. These combined efforts represent a 60% improvement in the number of ounces delivered from Mogalakwena over the last six years.”

At a glance, performance over this period also includes:

Despite such excellent performance, Griffith believes there is still a lot of room to improve productivity and reduce costs further – by focusing on consistent processing performance every day but more excitingly evaluating the potential to expand the operation and incorporate new-age technologies which are designed to deliver on these objectives.

“We must constantly review the next wave of value add from the business – and not just at Mogalakwena, but at all our operations. This is our approach to building and maintaining a successful company.”

Because Mogalakwena is a palladium-rich resource, Griffith believes it would benefit from an expansion given the current and medium term structural deficits in the palladium market.

“We believe that we will continue to see palladium market deficits for at least the next 10 years. To build further onto a world-class asset that already boasts the best margins in the industry, makes complete financial sense and would represent an alignment of the mine and market planets.”

A prefeasibility study, currently underway, is evaluating the potential to build a third concentrator to improve the NPV of the asset.

At this stage Amplats is considering a 9 – 12 Mtpa concentrator which would lead to an additional 270 000 palladium ounces and 250 000 platinum ounces (annually).

Importantly, the CEO notes that the mine has sufficient smelting and base metal refining capacity in place for such an expansion.

The company should have a more concrete idea on time schedules and project implementation towards the end of 2019 although the full study could take another year to complete after that.

“We will need two years to execute the project if it proceeds, which equates to roughly five years from the conceptual studies to production start-up.” The impact this project would have on the mine’s lifespan is marginal considering its size.

Beyond this, Griffith highlights that the potential for Mogalakwena in the fullness of time is even greater and may see the mine transition to an underground operation. Low grade stockpile heap leaching may also enter the production pipeline.

Amplat is also injecting a lot of time and energy into assessing the advantages of incorporating various digital technologies across the operation – and is either considering their potential or test trialling them on site.

The concept of the digital twin holds great operational efficiency enhancements Griffith points out – and works best when replicating specific components within a truck or shovel which enable quick and real time adjustments to the machines and also helps detect faults – and in so doing deliver material savings in maintenance costs and downtime reduction.

Blasting is another key area that can influence the efficiency of the mine.

From a process perspective Griffith notes that while the concentrators already incorporate a lot of autonomous technology, adding further to this is an easy and natural step that could further enhance the plants’ performance.

“We are further to this also looking to introduce new sorting methods, and more specifically optical sorters designed to discard waste before entering the plant so as to deliver higher grade material for processing.” This is in a trial phase currently.

Another exciting project under review is the possible replacement of conventional crushing circuits with blade-cutting machines which would not only use less energy but would break the rock more effectively in “different lines” which would translate to improved flotation performance.