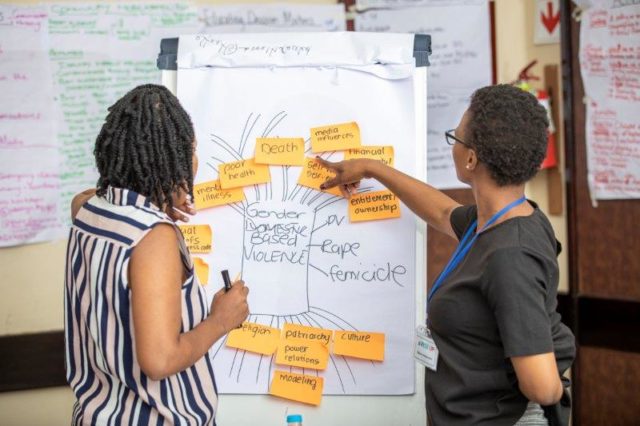 Despite many South African policies that promote women’s and girls’ rights, South Africa has one of the highest rates of females killed by interpersonal violence in the world, according to the World Health Organisation.

Rise Up has launched its global Gender Equity Initiative in South Africa, with support from Cummins Inc.

Twenty visionary leaders from Gauteng and the Durban Metropolitan area have been selected from a very competitive pool of applicants to join Rise Up’s powerful network of more than 600 leaders advancing women’s and girls’ rights and well-being around the globe.

This new cohort of Rise Up Leaders will participate in a week-long intensive Advocacy and Leadership Accelerator workshop in Pretoria to strengthen their leadership, build their advocacy capacity, and develop their own advocacy strategies to improve the lives of girls and women in their communities, and create national-scale impact in South Africa.

Following the Accelerator, Rise Up Leaders will apply for competitive seed funding to launch their strategies to advance education, equity, opportunity, and social justice for women and girls.

Rise Up, an international non-government organisation based in Oakland, California, will invest in these local leaders to strengthen their organisations, so that they can lead change in their communities through improved laws, programmes, and funding for women and girls.

Since 2009, Rise Up Leaders have advocated for over 120 laws and policies impacting 135 million people in Africa, Latin America, South Asia, and the US. With support from Cummins Inc.

Rise Up is building a global movement of visionary leaders dedicated to advancing gender equity.

Cummins Inc. launched the Cummins Powers Women Initiative in March 2018, a monumental investment in proven programmes like Rise Up that create large-scale impact in the lives of girls and women globally.

Since the launch of the initiative, a total of 74 grants have been awarded globally. Cummins itself has committed a $10 million investment over three years.

The grants are dependent on the business case and specific requirements of each Non-Governmental Organisation (NGO).

Christian Ndomba, Corporate Responsibility Leader – Africa Middle East, reveals that the direct impact equates to 34 123 people having received training or support directly from funding (for example, a client receiving training due to a grant.)

The primary impact has been 66 615 people benefiting from those directly impacted by funding (for example, a person receiving education from a client trained by means of a funded programme.)

The secondary impact has been 5 604 781 people benefiting indirectly from grant funding (for example, a person affected by a change in the law or policy.)

The partnership with Cummins Inc. has expanded Rise Up’s reach to activate women and girls to realise their own potential, and speak out as leaders to create a more just and equitable world.

“We are deeply honoured to partner with Cummins to advance gender equality globally. Rise Up is leveraging this partnership to invest in the vision of girls and women leaders to transform their own lives, families, and countries,” says Denise Dunning, Rise Up Founder and Executive Director.