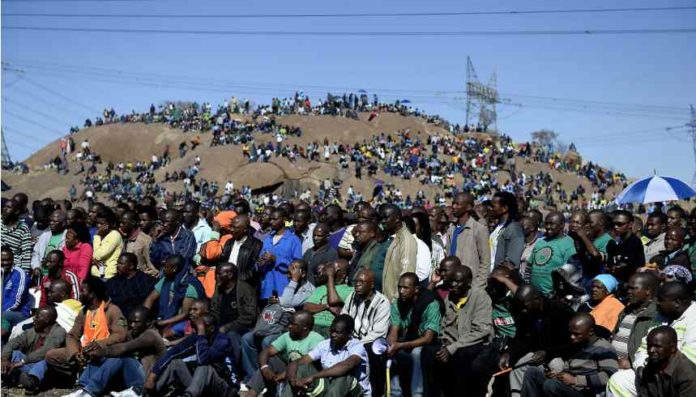 The Labour Court’s rejection to Solidarity’s application follows after the company succumbed to pressure from the Association of Mineworkers and Construction Union (Amcu) to be the only recognised trade union at Lonmin.

According to Solidarity general secretary Gideon du Plessis, the run-up to the dispute began in August 2013 when Lonmin agreed to Amcu’s wishes at the one-year anniversary of the Marikana tragedy to acknowledge Amcu as the only trade union at Lonmin.

“By doing so, Solidarity and United Association of South Africa’s (Uasa) recognition as representatives of the skilled workers at Lonmin, was unlawfully terminated,” comments du Plessis

“Today’s court ruling has denied the constitutional right to freedom of association of Solidarity members, but this might be restored in the near future by a further lawsuit since Solidarity has submitted an application to the Commission for Conciliation, Mediation and Arbitration (CCMA) to acquire full recognition rights at Lonmin,” comments du Plessis.

Solidarity, however, has welcomed the fact that judge Andre van Niekerk ruled as follows in paragraph 11:

Solidarity’s prospects of success in any section 21 arbitration hearing may well be excellent, given the Labour Appeal Court’s judgement and in particular, its view that a system of majoritarianism is compatible with the right to freedom of association, provided that minority unions are not denied certain basic rights that are inherently an element of the rights to freedom of association and to organise.

These rights are recognised by the applicable ILO Conventions (all ratified by South Africa), by the Constitution and by the LRA itself.

“It simply looks as if Lonmin’s top management and its human resources department are foolhardy, which should be cause for concern for Lonmin’s major shareholder, the Public Investment Corporation (PIC),” Du Plessis adds.

He mentions that the Farlam Commission of Inquiry held in the wake of the Marikana tragedy, highlighted Lonmin’s poor labour relations practices as one of the causes of the trade union tension that developed at the beginning of 2012 and that later led to this tragedy.

“Lonmin, however, learnt nothing from “Marikana” and that it continues to apply majoritarian principles that, ironically, Amcu had rejected in public in 2011 and in 2012.

“In August 2017 Lonmin CEO, Mr. Ben Magara, indicated that the majoritarian principle played a major role in the Marikana tragedy,” he continues.

Solidarity calls on Lonmin to show leadership and to defuse the current tension by reinstating the recognition rights of Solidarity and Uasa unconditionally, thereby putting an end to further legal action.

“Meanwhile, Solidarity has also embarked on a process to canvass support for a petition to be filed against Lonmin’s management, which at the same time will serve as a means of obtaining a mandate from Solidarity and Uasa members for a strike,” Du Plessis concludes.