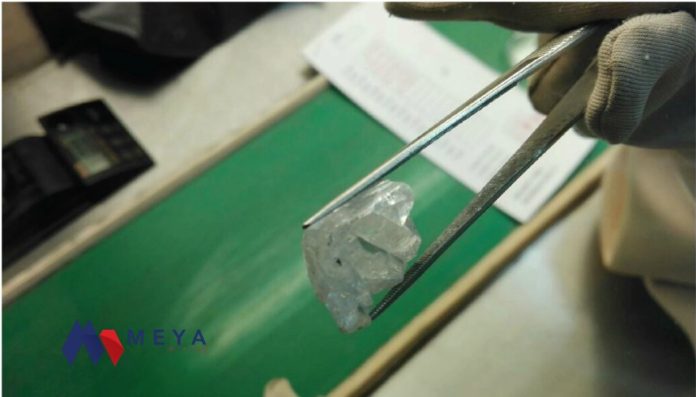 An initial assessment indicates that this 476 carat diamond find is the 29th largest diamond ever discovered.

Any value indication of the diamond is pure speculation at this stage as the diamond has not yet been examined and assessed by the necessary experts.

It is Meya’s intention to sell the diamond through an international auction.

In addition, two other special diamonds of 19.70 carats and 27.93 carats were discovered on the same day in the Kono District.

Meya is in the process of completing its Resource Statement over the Kono District.

Trustco Resources acquired a 51% interest in Meya mining in November 2017.

Meya holds a four year exclusive diamond exploration licence EL: 07/2015 (the licence) over an area comprising of 130.38 km², a kimberlite concession spanning from the Kamara, Gbense to the Tankoro chiefdoms in Kono District, Sierra Leone.

The remaining 49% interest in Meya is held by Germinate Sierra Leone (Germinate), the original licence holder.

Germinate is a 100% Sierra Leonean owned company. The relations between Namibia and Sierra Leone date back to the days of the liberation struggle.

Sierra Leone was one of the West African countries that assisted SWAPO (South West Africa People’s Organisation), the ruling party in Namibia, not just financially and diplomatically, but also with the development of the country’s human capital.

During the 1970’s and 1980’s many young Namibians who went into exile, were offered a “home away from home” living with “foster” parents and attending school in Sierra Leone.

Among them was the honourable Saara Kuugongelwa-Amadhila, currently the Prime Minister of Namibia, and many others who now serve as senior civil servants in Namibia.

Whilst there is limited bilateral cooperation and trade between Namibia and Sierra Leone today, the individuals that once called both countries ‘home’, preserve and respect the historical bond that exists and are working together to strengthen bilateral relations.

Cooperation between these two countries will gain momentum once the Namibian High Commission in the Republic of Ghana becomes fully operational and Meya mine is in full production.