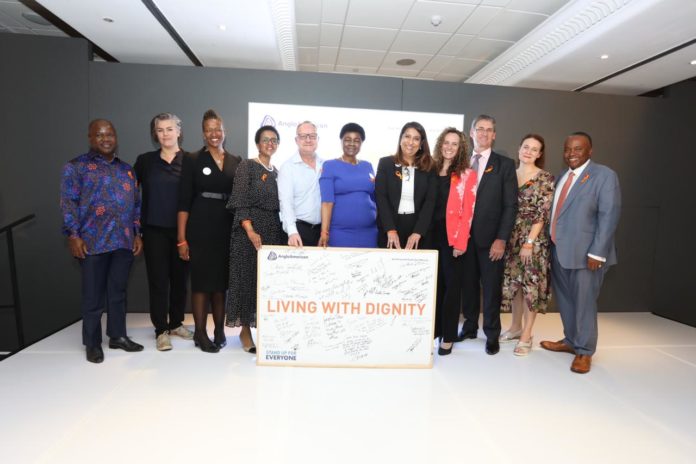 Anglo American has launched a wide-ranging programme that aims to tackle the scourge of gender-based violence through targeted interventions at its operations and in its host communities.

The launch of the programme, which is aligned to President Cyril Ramaphosa’s Emergency Action Plan for gender-based violence, was attended by Professor Hlengiwe Mkhize, Deputy Minister in the Presidency, responsible for Women, Youth and Persons with Disabilities.

The launch of the Anglo American Living with Dignity programme coincides with the 16 Days of Activism against Gender-Based Violence annual campaign and includes a range of gender-based violence interventions that aim to ensure safe spaces in line with the United Nations’ Safe Cities flagship programme.

Speaking at the launch of the programme in Johannesburg, Anik Michaud, Group Director of Corporate Relations at Anglo American, said:

“Through this programme, we will work collaboratively with our partners in government and civil society to roll-out interventions to eliminate sexual and gender-based violence, in line with our purpose to reimagine mining to improve people’s lives.”

Anglo American also announced that it will be joining UN Women’s #OrangeTheWorld campaign, which aims to bring an end violence against women and girls.

“The mining industry has traditionally suffered from high levels of gender-based violence. What we’re trying to do with this programme is to better understand, and address gender equity challenges, and drive discussion around critical issues facing our society right now, like gender norms, values and practices that result in gender imbalances and often lead to gender-based violence,” said Nolitha Fakude, Chair of Anglo American’s Management Board in South Africa.

Speaking at the launch event, Professor Hlengiwe Mkhize, Deputy Minister in the Presidency for Women, Youth and people with Disabilities, highlighted President Cyril Ramaphosa’s recent call for all sectors of society to combat gender-based violence.

“South Africa has come a long well in terms of GBV and femicide prevention. Today’s event is a solid demonstration of President Ramaphosa’s clarion call for collaboration across sectors in preventing GBV. In terms of my own experience in the sector, I think it is important to emphasise that it is not only a problem of the poor, it is something that exists in our most modern and civilised structures, and that is where the danger is.” said Deputy Minister Mkhize.

Earlier this month, President Ramaphosa announced the implementation of an Emergency Action Plan to deal with gender-based violence. The Living with Dignity programme is aligned to the President plan, which is focussed on improving access to justice for survivors of violence, prevention campaigns to change attitudes and behaviour, and measures to strengthen the criminal justice process.

Fakude said the Living with Dignity programme included an initiative called Men as Partners, which encourages men to implicate themselves in positive change, become positive role models in their communities and support women and children initiatives.

The project was piloted earlierthis year at the Anglo American corporate head office and Anglo American Platinum’s smelter in Polokwane and was extremely successful in promoting perception and behaviour change among the participants, she said.

Other projects under the Living with Dignity initiative involve evaluating existing operational processes at operations to streamline them into comprehensive GBV elimination programmes and the introduction of programmes for families and employees that promote non-violent conflict resolution, positive parenting and gender de-stereotyping.

Anglo American will also be providing funding to the Department of Justice and Constitutional Development  (DoJ&CD) Victim-Centric Justice Project, aimed at centering crime victims in their pursuit of equal protection and benefit of the law, human dignity, privacy, access to information, and access to courts.

“In South Africa we are accepting the global challenge to eliminate gender-based violence in the workplace and in our communities Through our Living with Dignity programme, we are calling on men and women to learn more about how they can take a stand against the everyday rape culture that surrounds us.

“Every operation in South Africa will implement a flagship programme aimed at making our workplaces, communities, homes and schools safer,” Fakude concluded.