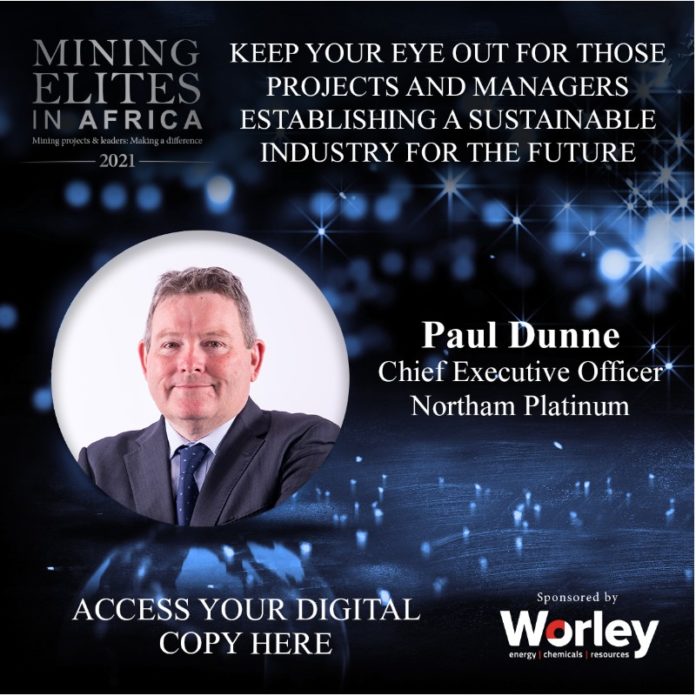 Northam Platinum, which operates four mines, five concentrators and two smelter furnaces in South Africa, recently reported a stunning set of results for its 2020 financial year (to 30 June 2020) with revenue at a record R17.8 billion, compared to R10.6 billion in 2019, and profit more than doubling to R5.3 billion from R2.4 billion in 2019.

While the excellent numbers are in part attributable to a 67.4% increase in rand-denominated basket prices during the year, the role of CEO Paul Dunne should not be underestimated.

Since he was appointed Chief Executive of Northam in 2014, the company has been transformed through acquisitions and growth projects.

“Impressive achievements and a significant change in direction for Northam.” – Andrew van Zyl

Paul, who has a BSc in Electrical Engineering, joined Northam from Impala Platinum where he had enjoyed a distinguished career over many years, ultimately holding responsibility for mining, concentrating and smelting operations at Impala’s Rustenburg and Marula mines.

When he arrived at Northam (succeeding Glyn Lewis), the company was very dependent on a single mine, Zondereinde, on the Western Limb of the Bushveld Complex (although its first big diversification, Booysendal on the Eastern Limb, was ramping up after starting production in 2013).

Shareholders have benefitted with R3.7 billion of value being returned to shareholders over the period.

The acquisitions have included Everest, the Zondereinde Western extension, Eland Platinum and, most recently, Maroelabult (which adjoins Eland).

The Everest acquisition opened the way for a brand new mine (Booysendal South) at Booysendal, which is due to be commissioned at the end of 2021, while the Eland mine, mothballed at the time of acquisition, is being brought back into operation, with activities currently focusing on the development of the Kukama decline system.

Currently, Northam has five mining modules across its mines but anticipates that within five years it will have nine, with five of these being fully mechanised.

The company is receptive to innovation, as evidenced by the commissioning of the first aerial rope conveyor system seen in South Africa at Booysendal and the recent trialling of a first-of-its-kind mobile tunnel borer at Eland.

Under Paul, Northam has embraced a culture not only of innovation but also strong decision-making and rapid delivery. Certainly, the market has been impressed by his performance and this has been reflected in a sharp rise in Northam’s share price over the past 18 months (notwithstanding a dip at the height of the COVID-19 pandemic).

With so many new assets set to deliver, the company’s prospects are excellent and it is expecting to achieve an annual production of 1 Moz in the medium-term.

Despite the challenges COVID-19 has presented, Paul’s focus and drive on delivering Northam’s growth strategy remains steadfast, as he’s stated:

“Our strategy is unchanged. We will continue to focus on returning value to shareholders; project execution; and growing our margin and improving our relative cost position in the sector.

“We need to operate in the lower half of the cost curve. In addition, over the short-term, we need to continue to drive towards operational normalisation as safely and efficiently as possible under difficult and unusual circumstances.”