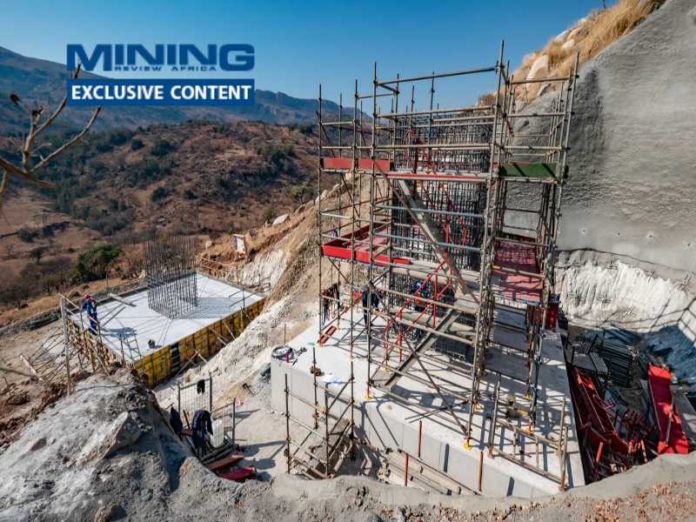 Northam Platinum’s Booysendal PGM operation, situated on the eastern limb of the Bushveld Complex, continues to fulfil the true definition of being a new age, new generation mine.

This is thanks to the adoption of technology designed to enhance its operational efficiency while most importantly, preserving the environment, writes LAURA CORNISH.

Having visited Booysendal numerous times over the last two years, the mine never ceases to impress. Having instituted various Brownfields expansion programmes to maximise the financial value of the operation, it continues to successfully reach its milestones comfortably (although in some cases these have been adjusted due to COVID-19 and lockdown measures).

Part of the expansion programme includes the development of a new mining complex referred to as the Booysendal South project. (The original operating footprint includes a North UG2 module expanded with its deepening project and North Merensky module).

Because the concentrator plant is situated nearly 5 km from the Central UG2 mine, amongst some of South Africa’s most beautifully natural landscape, an innovative approach to deliver a cost-effective transportation system between the two points was required.

Germany-based, materials handling specialist Doppelmayr’s RopeCon system was elected as the best solution for Booysendal South’s material transfer needs. It comprises a series of towers, strategically positioned between the mine and plant, connected by ropes and conveyor belt which will run the entire distance above ground.

An enormous feat, the South RopeCon was designed and built, and commissioned on schedule in early 2019 and is a huge success for the Northam team (overseen by Northam mining executive Willie Theron, project manager DRA Eddie Badenhorst and of course Doppelmayr).

The combined length of all the ropes is a massive 29 km and will be used to move the ore-carrying conveyor belt. From the loading station situated near the Everest plant, the conveyor belt travels across 12 towers which can accommodate a maximum 1 150 tph tonnage rate.

Part of the R5.6 billion capital investment is an expansion of the Merensky North module to increase production from 25 000 tpm to 50 000 tpm as well as a Merensky Central module of 50 000 tpm.

“The Merensky North mine lies just under 3 km east of the new Central UG2 mine. With sufficient capacity at the Everest concentrator plant – the additional Merensky north and central ore must also make its way to this process plant,” Badenhorst notes.

With equally as beautiful landscape in the area – investing in the establishment of a second North RopeCon was an easy decision.

“Although nearly half the length of the South RopeCon, the typography is very undulating and so considered technically more challenging to design,” Badenhorst notes.

“Once completed, the North RopeCon will be 2.7 km in length, run at a speed of 3.6 m/sec and will manage up to 400 tph. The belt width will measure 660 mm and run through seven towers of which the highest (tower 7) will reach 46 m,” Badenhorst outlines.

The full length of the north conveyor will run a down-dipping undulation, meaning the energy harnessed during the running process could be used to generate electricity but not of a sufficient amount to warrant the investment necessary to build the infrastructure to utilise it.

Fortunately, thanks to a brand new road that DRA oversaw, the construction of the towers will be that much easier to navigate and build because they will run parallel to the road itself.

“Having completed the South RopeCon so successfully, this materials handling solution has proven to be not only extremely cost effective when comparing it to traditional truck transportation, it has undisputedly minimised our impact on the environment – an essential aspect of the project considering the operation lies amidst valleys and beautiful natural vegetation,” Theron notes.

Some additional infrastructure is also required for the North and Central Merensky mine feed – which will share the same 4 200 tph silo currently on site at the UG2 South mine.

“It is important that we don’t fully blend the UG2 and Merensky ores. After a substantial amount of time investigating and simulating various options to avoid this, we opted to construct a second silo at the Merensky mine boxcut which will function as additional buffer storage,” Badenhorst explains.

When the UG2 south mine goes into a low supply peak, the on-site silo will draw down on the material until it is 90% empty where after the Merensky ore will be fed into the silo. Once transported to the concentrator, this will enable the establishment of UG2 and Merensky split rich ore stockpiles.

“The North RopeCon project was originally scheduled to be in full construction towards the start of the year but COVID-19 has caused a six-month delay on its full-scale execution,” Theron confirms.

Nonetheless, the project is back in full swing now that lockdown measures in the country have been mostly reduced. Badenhorst confirms that the project is in fact about two weeks ahead of schedule on the revised timeline.

“Civil works, which kicked off just before lockdown is due for completion in November. Mechanical installations will start in January 2021 and will be commissioned in November or December of the same year. The feed conveyors will be fully installed by June/July next year as well,” Badenhorst outlines.

Full commissioning of the North RopeCon is scheduled to start in December 2021.

Fortunately, the entire Booysendal RopeCon team are able to apply some lessons learnt from the first RopeCon project – a massive advantage considering the terrain for the North conveyor is more complex – “the towers for example have unusual shapes – designed to accommodate the terrain.

Because the tower bases sit on different elevations, the conventional plints have also been replaced with specially designed steel piping, a result of the different elevation between the plints making it more complex,” Badenhorst notes.

On the plus side, because the conveyor system is located adjacent to the road, the necessity to lay concrete foundations to lift the towers into place was removed

With RopeCon South the transfer point was directly below the silo. This created complexity during the construction phase as contractors were dependant on each other with reference to access to construct.

With RopeCon North this has been decoupled by installing a short transfer belt from below the silo to the transfer point at the RopeCon.

“We trust that this will improve constructability,” Badenhorst concludes.