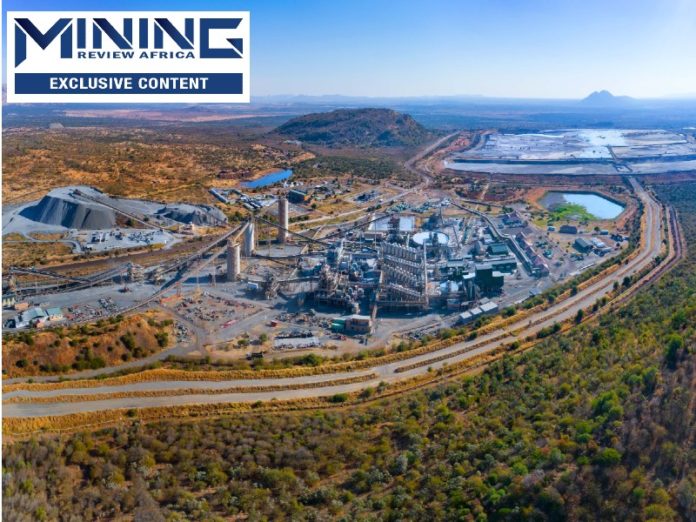 The road ahead is paved with green lower carbon PGMS for the Pilanesberg Platinum Mine (PPM). Now in its 12th year of operation as a financially profitable open pit mine, it is evolving with the exciting Triple Crown expansion into contiguous deposits of Sedibelo Central, Magazynskraal and Kruidfontein with an estimated resource base in excess of 60 million 4PGE ounces.

Comfortably situated on the Western Limb of the Bushveld Complex PPM has produced some 1.5m 4PGE (Platinum Group Elements) ounces since March 2009 having successfully weathered the storm of depressed metals prices and emerged cash positive, ready to grow responsibly and take advantage of improved market conditions.

First ore was delivered to the process plant in Q2, 2009 – averaging between 140 000 and 150 000 ozpa of PGM concentrate. Production, of around +/- 325 000 tpm of ROM material is generated from the West/Tuschenkomst pit which is focused primarily on the silicates (upper and lower pseudo reef package) and the UG2 reef.

“We are excited about this significant evolution of our operation – the next phase is the establishment of our second open pit (the East Pit) on the adjacent farm Wilgespruit and simultaneously to that, the first decline for PPM’s underground operations will start,” Badenhorst explains.

The COVID-19 initial lockdown period allowed the mine to review mining plans and in doing so, to materialise objectives into realistic growth strategies given the current circumstances.

“The full exploitation of our resource has eventually become a reality,” Badenhorst enthuses. “Our vision is becoming our reality as we start to implement various projects that will cement PPM’s position as a thriving cost efficient, low carbon PGM producer within the region for many, many years to come.”

The much-improved PGM basket price and tight cost control provide a solid growth platform and has given PPM the flexibility to extend the operating lifespan of the West Pit. PPM is currently busy with an optimisation study to determine the extent of the opportunity.

“As mentioned, this is just the beginning. The mine will now introduce a second, entirely new East pit to its production profile. Situated directly adjacent to the West pit, it is separated only by a fault line. This new pit has been a long time coming and required the preparation of Wilgespruit for mining which involved the successful negotiation and resettlement of families living across the area. We are now in a position to execute our first blast and develop this new pit with alacrity,” Badenhorst outlines.

As with mining in general, the social environment within which PPM operates is an important feature of its sustainability and provides optimum employment opportunity for local communities.   Perhaps, it is also the expanded opportunities for new work that has ultimately seen such a smooth transition for the mine to enter a new mining zone.

There is also no forgetting the Triple Crown expansion, which will be mined simultaneously with ore from the existing open pit.

While the fruits of its labour to deliver a longer-life and potentially larger open pit mine is materialising, it is the underground potential that represents a truly long life (+50 year) operation.

Outlining the underground mine

Developing an underground mine has also required long-term planning. “It was essential to get the timing on this just right,” Badenhorst states. “We understand our geology, which is challenging, and want to ensure our commitments and intentions are within reach. And with added flexibility around the lifespans of both of our pits, the board approved our underground mine development plan in December 2020.”

At present, the plan determined to be the most optimal is to construct two declines in two phases. This will be overseen by an underground general manager who has already been appointed.

The first decline will be on the farm Wilgespruit and the current planning is to start with development in Q1, 2022 and the first reef coming out in 2026, reaching steady-state in 2030. A second decline is planned to start with development in 2024. Both these declines will deliver a high grade UG2 ore that will be treated in the existing concentrator. Each decline will have a 80 000t/m capacity and will reach steady state by 2030.

With a major drive to provide local employment to neighbouring and nearby communities, the underground mine offers an opportunity to increase on-site numbers. “We will of course provide progressive training to operate comfortably in an underground environment,” Badenhorst notes.

Another exciting addition to the PPM portfolio is the 110 000 tpa Kell plant with alternative technology to conventional smelting and refining. Kell promises to reduce energy consumption by 60% and have a much smaller carbon footprint than the conventional smelters. Kell will give the PPM concentrator the opportunity to improve recoveries, and there is limited constraint on the chrome content produced from the concentrator.

Well known in the industry, Keith Liddell is the inventor of the Kell Process, having conceived the concept initially as a treatment route for PGM concentrate from the UG2 reef. Chromite contained in UG2 concentrates presents challenges in smelting, with constraints being placed on the amount of chromite that flotation concentrates can contain reducing flotation recovery. Kell was designed to remove this chromite constraint and it is insensitive to chromite.

Over the years of development, the Kell Process has been fine-tuned through testing and engineering studies to be robust and flexible so that its operating conditions can be integrated to the needs of each concentrate processed.

“We are proud to be associated with this initiative and to be the first in Africa to adopt the technology – taking us on a green hydrometallurgical journey that again offers additional employment opportunities. With its success, our ultimate goal is to use the smelter for toll treating neighbouring companies’ ores,” Badenhorst concludes.

Besides its PGM operations, PPM is also equipped with a standalone chromite recovery plant, which for the past two years has contributed to profitability.