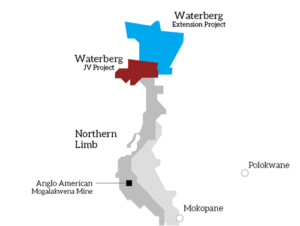 The deposit remains open, beyond the current strike length, for further expansion and all of the intercepts will be considered in the resource update planned shortly. Independent qualified person resource calculations and peer reviews are in progress.

A total of 71 000 m of largely fill drilling has been completed since the last resource estimate. One drill continues to prospect the open strike and dip lengths looking for the best palladium and platinum grade and thickness at Waterberg.

A first priority for Waterberg in 2015 will be the completion of resource update in May 2015, including recent drilling, followed by Pre-Feasibility results in mid-2015. Engineering firm DRA is continuing with the Pre-Feasibility Study, which is funded by the company and Waterberg Joint Venture partner JOGMEC

About the Waterberg Projects

The Waterberg deposit was discovered in late 2011 by the joint venture partners and has grown dramatically over the past few years to be a globally significant deposit. The Waterberg Extension is held 87% by Platinum Group Metals directly and indirectly and is located adjacent and to the north of the Waterberg Joint Venture within a regional scale set of prospecting rights granted to the company.