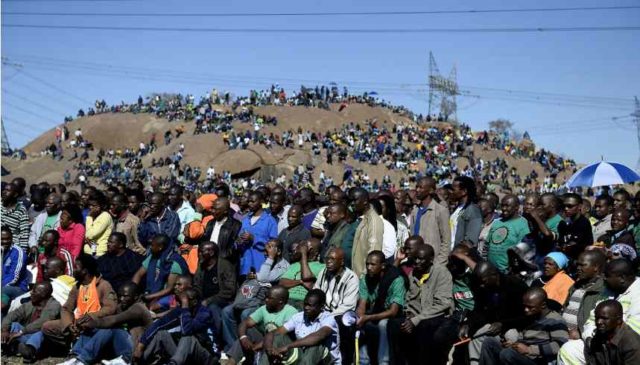 The National Union of Mineworkers (NUM) notes the labour unrest that began on 10 August 2012 at Marikana which resulted in workers losing their lives.

It has issued a statement regarding the Marikana incident:

“On the eve of the commemoration of this unfortunate event five years ago, as a union, we join all South Africans, and many millions more across the globe, in remembering the tragic loss of 44 lives.

“As the NUM we want to categorically state that the current arrangements of commemorating the event are insensitive as it undermines and excludes other family members.

“Families lost their loved ones, husbands, sons, and brothers, and in most cases have also lost their only breadwinner.

“Whilst we understand that no compensation can replace the lives lost and injuries suffered at Marikana, the NUM calls on the government and all parties participating in the discussions regarding compensations to conclude this matter in the interests of the orphans, widows, widowers and the injured.

“We applaud the fact that government has resolved to pay R1.1 billion in compensation for the people who were killed in Marikana in 2012. We hope that this compensation is meant for all victims including those who died as a result of the chaos created by Impala Platinum mine before and after 16 August 2012.

“It would be prudent for Impala Platinum mine to have contributed a large portion of this compensation money.

“We are saying there should be justice for all Marikana victims.

“The families affected by this tragedy come from all over South Africa, not just around the mines, but in areas established by the apartheid regime to facilitate the supply of cheap labour to the mines, and also from neighbouring states.

“The NUM is on record refusing to use this tragedy to score political points. We won’t play the blame-game nor will we use the anger workers and their communities are feeling to drive sentiments against the government or anyone.

“The NUM has a proud 35-year history of fighting to improve the lives of this most exploited section of the working class.

“It has always been a fortress of the mine workers’ struggle, championing their demands for better wages and working conditions.

“It has earned its stripes as a true representative of workers and lifted the bar for all the workers they represent.

“The Marikana incidents must be a lesson to all of us that society must unite against exploitation of the poor and the working class.

“Today conditions of mine, construction and energy workers, whilst far from ideal, have improved for the better.

“Workers who used to be treated as the lowest of the low, with no respect for their human dignity and paid starvation wages, have won important improvements in pay, health and safety and living conditions.