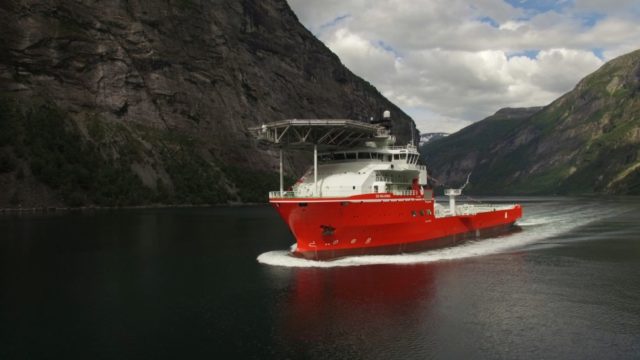 Debmarine Namibia took ownership of the SS Nujoma’s sixth ship in its fleet from Norwegian shipbuilders Kleven Verft. It is valued at N$2.3 billion (or R2.3 billion).

[quote]The ship was co-funded by RMB Namibia and was built in Norway and will embark on its maiden voyage for Cape Town later this week for outfitting with exploration equipment, including a technologically advanced sampling system and treatment plant.

The 113-metre long SS Nujoma is the most sophisticated diamond sampling and exploration vessel in the world.

It will join Debmarine Namibia’s other five vessels, the Grand Banks, Debmar Atlantic, Debmar Pacific, Gariep and Mafuta, which operate within the world’s largest known placer diamond deposit off the southern Namibian coast.

Debmarine project head Michael Curtis says that this is the first new build vessel for Debmarine Namibia with Kleven Verft shipyards in Norway which has been a great success so far.

“Kleven has delivered a state-of-the-art vessel that meets or exceeds all aspects of our technical specifications, in record time. Our Debmarine Namibia crew will sail the vessel to Cape Town, leaving later this week, and arriving in late August,” says Curtis.

In Cape Town, the company will install the sampling system and treatment plant and commission the system before sailing for Namibian waters for final commissioning and testing in early 2017.

SS Nujoma, named after Namibia’s founding president, is the second Debmarine Namibia vessel financed by RMB Namibia, the first one being the Mafuta.

The N$2.3 billion project was funded by a US$150 million term facility (75% of the total cost) co-arranged and funded by RMB Namibia, with the balance paid directly by Debmarine Namibia.

RMB Namibia also facilitated a Norwegian Krone swap and hedge facility to allow Debmarine Namibia to settle the purchase of the vessel in local currency in Norway.

The final acquisition payment towards the $65 million vessel, was made to the shipbuilders when Debmarine Namibia took ownership on Monday and the balance of the US dollar term facility will be applied towards outfitting the ship’s 2 100 t of mission equipment in Cape Town.

RMB Namibia believes that its team has a strong competitive edge through their extensive local and international experience in the mining sector, enabling them to partner with their mining clients through the peaks and troughs of the cycle, and become on-the-ground partners with companies in the Namibian mining sector.

Dempsey, who became CEO of RMB Namibia at the beginning of July, says RMB Namibia is excited to be playing an active role in Namibia’s Harambee Prosperity Plan by contributing to the expansion and success of local mining companies through transactions like this.

The Harambee Prosperity Plan aims to place the country on a long-term growth path towards an inclusive economy.

Dempsey joined RMB Namibia in 2014 having spent 15 years prior to that in a number of mining entities around the world.