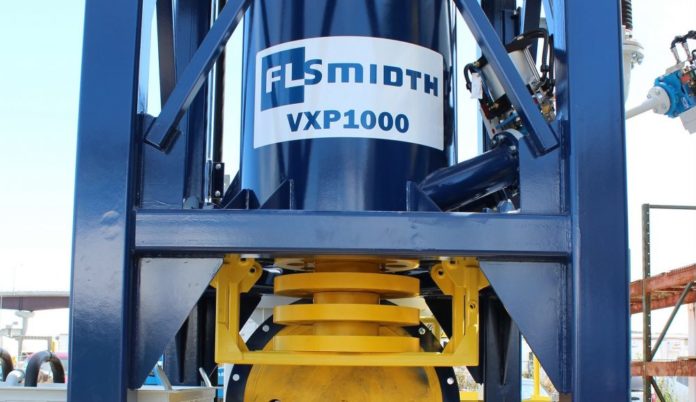 Because FLSmidth’s mills operate at a power intensity that is higher than low speed mills and overlaps that of high speed mills, one of the major traits of VXPmills is their flexibility, allowing them to be engineered and manufactured for a host of grinding applications.

This important characteristic has been demonstrated again, with FLSmidth’s South African operation in Roodepoort involved in the engineering design and manufacturing that will see VXPmills used in extreme acidic conditions on a copper processing operation in the Middle East.

“The outcome of this project was yet another derivative of these mills. In this instance, we adapted the VXPmill’s design to work in severe process conditions,” says FLSmidth sales & marketing manager for sub-Saharan Africa Terence Osborn.

He says the VXPmill is a vertically oriented stirred media mill that is open to the atmosphere and designed with a modular impeller that has removable discs and spacers. Slurry enters at the bottom, travels upward through the mill chamber, and overflows through a media retention screen at the top. The rotating polyurethane discs activate inert ceramic grinding media inside the milling chamber. This fluidises the media bed, attrition grinding the particles in the slurry.

Osborn says the system is designed to allow changes to the distribution of the media and energy within the mill by altering the number and spacing between the impeller discs when the mill is commissioned.

Assembly of the two mills will start in August 2016, followed by testing at FLSmidth’s facility in Johannesburg, Gauteng.

The mills will then be containerised and shipped to site and commissioned by FLSmidth before the end of the year where after they will play their role in helping the copper producer improve the recovery of its very fine copper particles.

“Because the mills will be exposed to pulp, they had to be engineered specifically for extremely acidic environments, with a PH of 2.5. This meant the components of the VXPmills had to be made from a variety of materials that would not only withstand arduous operating conditions, but also ensure that the plants could be built within budget,” Osborn explains.

He says this was a complex undertaking providing various challenges for the company’s local engineers. The South African team also made extensive use of the expertise of FLSmidth’s design engineers in India.

Osborn describes the end result as an ingenious solution. “We did not go for one specific material selection, such as stainless steel, but rather opted for a combination of many different materials based on the principle operational requirements of each component as well as the suitability to withstand the acidic environment.

“We do not believe that there are many engineers who would have been able to achieve this outcome, over the time period and within budget” he says.

The end result saw only a 7% increase on the initial costing of the mills, with the solution comprising a combination of mild steels, austenitic and duplex stainless steels, fibre reinforced plastics, as well as polyurethane and ployurea coatings.

The shaft, for example, is made from mild steel, but coated with polyurea. As Osborn points out, this was a more cost effective solution than manufacturing the entire shaft from stainless steel, as was initially considered.

On the other hand, stainless steel proved to be a viable material choice for the handrails on the plant because the material can be bought in preformed sections.

Meanwhile, the plant’s vibrating screen is made from mild steel that was coated with an acid resistant paint and the mill barrel is made completely from duplex stainless steels.

During the engineering design phase, the FLSmidth team also had to redesign the VXPmills’ structure to accommodate the heavier WEG motor installed on top of the mill.

Not only did the project highlight the processing engineering capabilities of FLSmidth’s South African operation, but this is the first time that VXPmills are being manufactured in the country. Built at the company’s facility in Johannesburg, Osborn says that the project created enormous opportunities for local fabrication and instrumentation companies, to name a few.

The lion’s share of VXPmills installed worldwide is located in Africa, primarily in gold mining applications. Interestingly, the layout of the mills for this customer was based on an earlier successful project FLSmidth undertook for a prominent gold miner in West Africa.

Osborn is very excited about the future prospects for the company which is already preparing itself for another similar project. Meanwhile, the future continues to look bright for VXPmills that have demonstrated their suitability in yet another grinding application.