How to conduct error-free field pressure tests on PVC pipelines

Field pressure testing of PVC pipelines has proven to be a contentious issue in South Africa, with consulting engineers and installers often having different interpretations of how testing should be conducted. DPI Plastics has developed a ‘how-to’ guide on field pressure testing to ensure that the integrity of a pipeline is not compromised as a result. 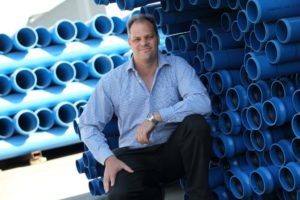 Modern plastic pipes are manufactured under controlled conditions and the testing regime at the manufacturing facility includes hydrostatic pressure testing of pipes and joints. This ensures that they are capable of delivering on minimum performance requirements. When the pipe is laid on site, however, pipes are joined outside the control of the pipe manufacturer.

The field pressure test is therefore used to test the integrity of the pipe joints which were completed on site. This test is covered by the SANS 2001:DP2 – Medium pressure pipelines standard. DPI Plastics product manager Renier Snyman notes that although the standard attempts to lay down the rules thoroughly, it is often misinterpreted or misunderstood. “The most commonly misinterpreted test parameters are pressure, duration and length,” he explains.

Snyman stresses that it is important to check the condition of test equipment like end caps, hoses and pressure testing machine prior to commencing the test. “If equipment leaks, the test will be compromised. Calibration of test equipment, especially pressure gauges, should be checked. Inaccurate pressure gauges will not only compromise the integrity of the test, but may lead to over-pressurisation and subsequent damage of the pipeline.”

All pipes require large volumes of water to conduct a field pressure test, and Snyman advises that a check should be undertaken to ensure that there is sufficient water available on site prior to the commencement of the test. “What’s more, any concrete work, like thrust blocks, should be given sufficient time to reach full strength prior to testing, in order to preserve their integrity.”

Temporary end caps fitted for testing purposes should be restrained against end load movement under pressure. “It is important to bear in mind that end load forces are high and restraints for end caps must be able to withstand these forces. For example, 500 mm class 12 PVC pipe subjected to 18 bar pressure generates an end load of approximately 18 tons directly onto the end caps.

According to Snyman, the pipes also have to be properly backfilled in order to keep them from rising up from the trench during testing. “It is important to keep the joints exposed, however, as it will make inspection for leaks much easier and quicker,” he continues.

Pipelines can sometimes be several kilometres long, and it is therefore beneficial to test the pipeline in sections. “This method is more accurate and takes less time to inspect the joints. It also requires less water for each test, and is quicker to fill the line. If a problem arises, it will also be noticed sooner and can be rectified before kilometres of pipeline is laid,” Snyman points out.

Requirements for determining the test pressure

The reason for performing the pressure test is to establish that the pipeline does not leak. Test pressure is raised above the operating pressure of the pipeline to allow the pipeline to settle under that pressure and to highlight possible leaks that would otherwise only develop after some time under pressure. With this in mind, the following requirements for test pressure are set out in SANS 2001: DP 2.

After pressurising the test section slowly, the stop ends and thrust blocks should be checked for movement. If movement is detected, the test must be immediately terminated for repairs to take place. Once the pipeline has reached test pressure, the joints must be inspected for leaks. If leaks are found, the pipeline should be de-pressurised, and leaks repaired before restarting the test.