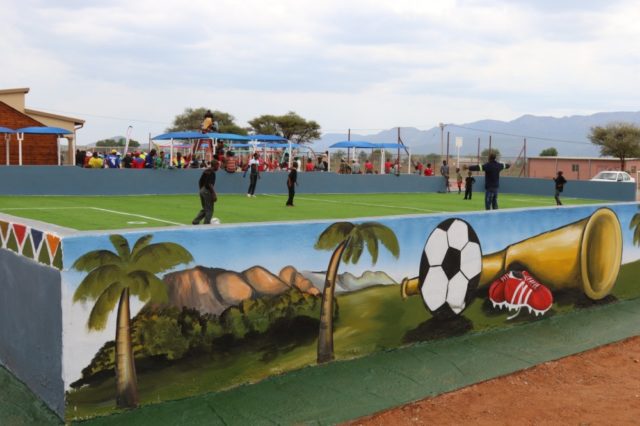 Thanks to Ivanplats, an Ivanhoe Mines company, the Lesedi community centre near Mokopane in Polokwane has undergone a complete refurbishment for R2 million.

Ivanplats did the project together with on site project management and quantity surveying assistance from Turner & Townsend. The centre is situated off the N11, about 10 km north-west of Mokopane.

The centre is aptly named as Lesedi, which means ‘light’ in Tswana. First opening its doors in November 2010, the main focus of the centre is to provide physical, educational, financial, nutritional and emotional support for the orphans and vulnerable children and their families in the nearby villages of Kgobudi, Sekgoboko and Malepetleke.

It’s a place of safety the children can go to after school, a safe and friendly environment where they participate in life skills lessons, do homework, play sports and receive a meal before they return to their own homes.

Over and above the 101 orphans and vulnerable children cared for, Lesedi also looks after 62 patients with chronic illnesses, operating out of a building which was donated by the local community.

The centre also offers community information sessions to help bring awareness to adults on the pressing issues of today that are affecting them and their children.

Ivanplats Werner Botha, senior projects manager, social and legal compliance and project lead on the Lesedi refurbishment and Manny Dos Ramos, senior manager, strategic support and project manager for Lesedi, say the refurbishment project was undertaken by Ivanplants in response to the company’s strategic social responsibility commitments to the communities around the Ivanplats Platinum Mine.

Adds Raphael Baiden, associate director, Turner & Townsend: “Due to our involvement in the main mining contract, we were approached by Ivanplats to assist with providing quantity surveying services on the refurbishment project.”

“As part of our CSR commitment to add value and make a real difference to local communities we were delighted to undertake this work. Previously we have assisted with a similar refurbishment project at the Tharullo Drop-in centre in Mokopane, also through Ivanplats, where a funding proposal was compiled for the Japanese Government, and which kicked off in March 2016.”

All in all the three-month Lesedi project to renovate, restore, rejuvenate and recondition the centre took 4 257 bricks, 60 bags of cement,5 m³ of building sand, 87 m³ of concrete and a crew of 15 providing some 4 350 man hours.

As a result the local community now has access to a flourishing vegetable garden, a mini-soccer field with astro turf, a netball court, and play area with a jungle gym. The building has been completely refurbished and furnished, including school benches, chairs and gas stove.

Toilets and a water harvesting tank have been installed along with the drilling and equipping of a borehole for water, and a fenced off recycling area established. A new fence has also been erected as well as a shaded canopy near the sports fields.

Adds Botha: “Lesedi believes the importance of physical exercise for children can never be underestimated. Playing team sports such as netball teaches them about social interaction, perseverance and self-esteem. They also learn to share and co-operate, while the jungle gym will help stimulate the imagination and creativity.”