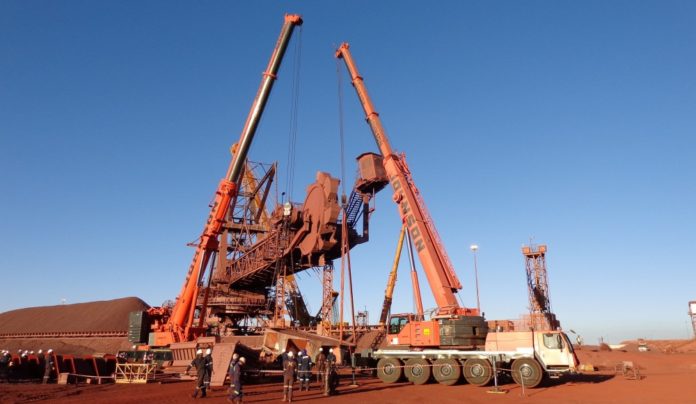 Working with two customers on the same project site and on the same massive piece of machinery enabled both companies to achieve significant savings in both time and cost.

This is according to Johnson Crane Hire who was contracted to undertake heavy lifts for both Tenova and EMC Engineering at Kolomela mine.

“This attention to detail during the planning phase allowed us the flexibility to select a solution which would meet both customers’ needs and still meet the stringent safety requirements in the mining sector.”

Interestingly the lift of the counterweight boom was a repeat process as this lift had previously been done by Johnson Crane Hire for EMC Engineering. Grange says the only difference being the newly engineered counterweight boom was stronger, and therefore heavier, leading to the use of a larger crane for this particular lift.

A Liebherr LR 1600 crawler crane was used to remove the counterweight from the stacker reclaimer. The counterweight is made up of 18 10 t concrete weights making it a total of 180 t. This lift was accomplished by removing two 10 t weights at a time and was done in nine separate lifts.

The new counterweight boom was positioned at the most appropriate and ideal lifting radius for the task at hand, and once the old boom had been lifted off it was laid down alongside the new boom. The new boom, weighing in at 108 t, was lifted into position using the same LR 1600 crane and then secured by the EMC Engineering team.

At the same time, Johnson Crane Hire undertook the second lift which was the bucket wheel exchange for EMC Engineering. The old bucket wheel, weighing 30 t, was removed using a LTM 1300-1 crane and a LTM 1095-5.1 crane. Once it had been lifted off the boom, a second crane – an LTM 1095-5.1 – was used to tail the large component until it was laid down safely.