This development from LignoTech is achieved through the use of natural organic polymers that overcome the hydrophobic nature of fossil fuels and binds coal particles – reducing their release into the air.

Globally, the mining, stockpiling, transportation and processing of coal receives negative media attention due to the public health and environmental concerns regarding the release of particulate matter (PM), especially during transportation.

Historically, large volumes of water are added to coal piles and rail cars to reduce the evolution of these PM’s with limited success.

Carefully controlled tests, at wind speeds of up to 50 km/h, show a massive 96% reduction in the loss of coal particles smaller than 4 mm in diameter, as shown in the graph. 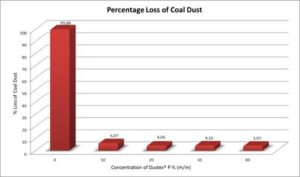 Transport via rail exposes the Dustex P/Coal agglomerates to excessive vibration which can facilitate the reformation of fine particles. Analysis of the trialled material however, indicates the formation of a robust crust with a thickness of up to 14 mm.

Force/impact studies also reveal that the crust formed withstood crush strengths of 10.9 kgf, ensuring the integrity of the application, as shown in the graph. 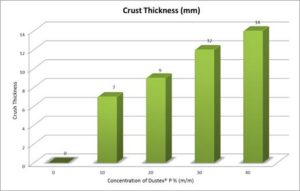 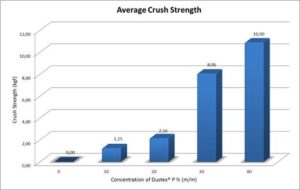 In addition to these attributes, the long chain organic polymers decompose upon coal firing and are readily biodegradable.

Dustex is a binding additive that suppresses the formation of dust.