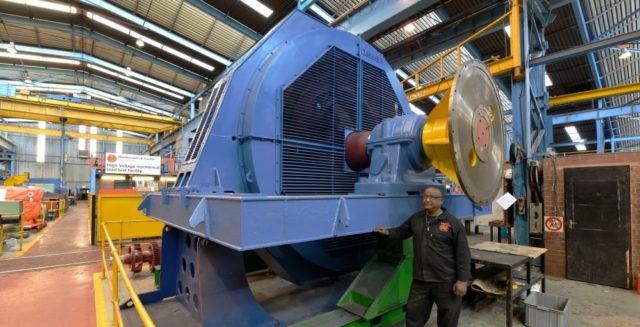 Marthinusen & Coutts recently performed an extensive rehabilitation of an old 2 985 kW salient pole synchronous mill motor that hadn’t been in use for over 10 years.

The project was commissioned by international mining company Newmont for the Waihi opencast gold mine in New Zealand.

Marthinusen & Coutts took on the project after initially agreeing to retrieve the motor from where it had been left lying in the veld at the site of the old Crocodile River gold mine at Hartebeespoort Dam near Skeerpoort, Gauteng.

“We were first awarded a contract to assess the condition of the motor to establish what sort of state it was in and to then quote for repairing it,” Craig Megannon, general manager at Marthinusen & Coutts, says.

“Not surprisingly we found it to be in a poor state. Apart from the fact that it had been left abandoned for so many years, it is a very old motor. It was manufactured in Japan in 1970 and had since been deployed at mining operations in Australia, Argentina and South Africa.

“Repairing it has involved an extensive amount of work and included complete remanufacture of parts that we found to be beyond repair,” Megannon says.

[quote]The rehabilitation contract was awarded in October 2014 and was completed at the end of October 2015. The repairs that were done included rewinding of the rotor, replacement of the stator core with laminations manufactured by Electrical Machines’ Laminations & Tooling business unit.

Parts that were replaced with re-manufactured parts included the journals, slip-rings, brush gear and coupling.

“We also modified the stator design to increase the stator copper thickness and reduce the overall tem­perature rise, which we found to be the main limiting factor in the stator in its original form. We did the design using advanced software we recently acquired for this type of specialised work,” he explains.

Machine Monitor, an Australia-based third party engineering company, observed and monitored the entire rehabilitation process and testing at Marthinusen & Coutts’ Cleveland plant throughout the duration of the contract on Newmont’s behalf.