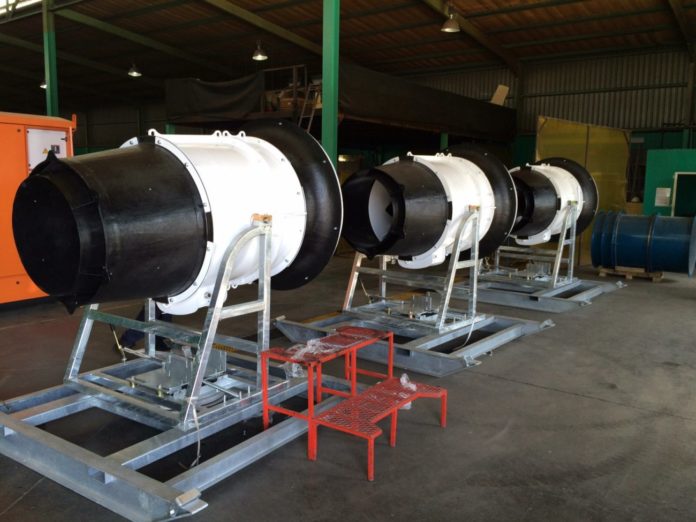 Over the past 24 months, MechCaL has secured clients that include the likes of Anglo American, Anglo American Platinum, Glencore, Sibanye Gold, Lonmin and Aquarius Platinum.

“Providing the highest quality products backed by performance guarantees and a strong after sales service culture has allowed us to prove ourselves in the market over the past two years,” says Jan du Plessis, acting MD and MechCaL spokesperson.

“We have taken on a number of exciting projects for South African companies including a complete retrofit of our fans for Anglo American Platinum in November 2014 and the delivery of an innovative compressor fan prototype to AngloGold Ashanti earlier this year,” he adds.

Internationally, MechCaL’s products have been commissioned by companies across the world, with its full product line being rolled out to the Zambian market a year ago where they have been well received by the mines in the region.

MechCaL has continually focused on diversifying not only its products but its markets as well.

Until recently, penetrating African markets outside of South Africa was challenging but the company’s fans have been well received in the Zambian market, as a result of the energy savings its products are able to achieve in the face of increasing power tariffs in the region.

One of the first Zambian mining operations to show interest in MechCaL’s products was Glencore subsidiary Mopani Copper Mines, who placed an initial order of 17 fans from across the MechCaL product range.

Over the past two years MechCaL have also expanded their product line with the addition of new Jet Fans as well as the introduction of new products that upped the ante for advanced ventilation.

In December 2015, MechCaL teamed up with environmental solutions provider, iCAT Environmnental Solutions, to create the IVAP-500 – an advanced optimised evaporation cannon capable of evaporating mine water under harsh environments.

“Inventive and pioneering product design has been one of our hallmarks and is in line with our goal to streamline the process for our clients by providing them new solutions that are custom designed so that they are able to secure the benefits of multiple products with a single unit,” Du Plessis explains.

This pioneering product design was recently put under the spotlight when MechCal delivered a ground-breaking fan prototype to AngloGold Ashanti’s Mponeng mine, in Gauteng.

The fan forms a flexible blade compressor that leverages the outstanding strength of high end composite materials – the use of which has become another MechCaL hallmark.

This level of innovation caught the attention of international organisations and in early 2016 MechCaL secured an investment from German fan manufacturer TLT Turbo GmbH.

TLT-Turbo is one of the world’s leading manufacturers of technology-driven industrial fans and ventilation systems with a history of more than 140 years in the industry.

Further growth in the company continued to be the mainstay theme of 2016 with the expansion of MechCaL’s service offering to include repairs and maintenance.

“We found that in this changing economy, companies are choosing to have equipment repaired instead of replaced, and as a result, we made the decision to expand our service offering to include repairs,” says Du Plessis.

This service helps support mines and businesses by ensuring that the equipment that they rely on every day is always operational.

According to MechCaL principal engineer and director of operations Michael Minges, warranties offered on fans can vary slightly dependant on the client and what the final application of the fan would be.

Initially MechCaL offered a 12 month warranty on all fans but this was later extended to 18 months when it became apparent how long their fans were lasting in the field – providing evidence that their products were lasting longer than those of their competitors.

Since 2011 only 14 to 15% of our fans in the market have come in for repair over the last 5 years, which equates to 2 to 3% per year on average. This is a small number when compared to the repairs and maintenance needed on the older types of fans – which is in the region of 20 to 30% per year.

In addition to adding the dedicated repairs area, MechCaL has upgraded its testing facility. The facility is now the only independently verified ISO 5801 standard Type D test ducting in the local fan industry, for testing of 570mm, 760mm, 1015mm and 1200mm fan sizes.

MechCaL has also upgraded its manufacturing infrastructure with the addition of a clean room, a new high temperature modular oven and additional engineering high precision jig tables at the end of 2014.

More recently MechCaL invested in a technologically advanced robot to add greater efficiency and accuracy to their production processes.

Furthermore, MechCaL’s ability to stay ahead of the curve has been recognised in the industry with the company having been nominated for – and the recipients of – several industry awards.

These include three Technology Top 100 wins in the technology, innovation, research and sustainability category; the Frost & Sullivan award for best practice in enabling technology; the IDC’s most innovative C=company award; the Technology Top 100 Minister of Science & Technology’s award for sustainable performance; and the best paper of the year award from the Mining Ventilation Society of South Africa.

“We are entering the final quarter of 2016 on a strong note with positive client feedback on our products, increased interest in our engineering and maintenance services supported by technological advancements in our manufacturing infrastructure,” Du Plessis concludes.