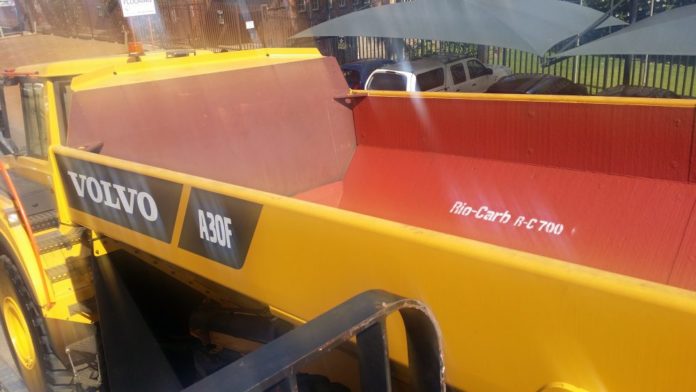 Due to their impressive hardness, the R-C700 CrC liners were installed to prolong the life of the original truck bin – which is known to withstand approximately 10 000 hours of unloading – by six times.

Rio-Carb Product Development Manager Luis Garcia explains that during unloading, the rear section of a dump truck bin receives the greatest amount of wear from severe sliding abrasion. The R-C700 CrC liner plates, with a hardness of between 56 and 58 Rockwell C, act as a barrier to protect the truck bin from corrosion and wear due to the abrasive silica they carry.

“The truck loads silica sand, which is used for a variety of industrial processes such as creating moulds and casts, glass manufacturing, water filtration or producing concrete. The mine then takes it off to the processing plants.”

Depending on what is being mined, the material causes damage to the bin. Therefore many companies opt to discard the bin once it has corroded and replace it. Rio-Carb’s R-C700 CrC liner plates are extremely wear resistant when compared with its competitors’ liner plates.

To test this theory, one truck has been fitted with Rio-Carb liner plates and the other with 400 material. They will undergo a test to see which will last longer at a mine in Lydenburg. The trucks will be put through the same harshness and unload the same material during testing and a comparison will be made.

Even though it is the first time Rio-Carb has designed and fitted a truck with liners, the company was able to finish the project within a week, which included getting approval on the actual designs, engineering and fitting them.

“We had to take measurements for sizes, made drawings and suggested how the liner can be laid up and fitted. Working outdoors was a challenge, as we lost a day and had to move indoors but everything went well, thanks to our experience and expertise,” Garcia adds.

According to Garcia, Danoher Construction got the dump truck from the original equipment manufacturer and wanted to keep its bin in good condition for longer. “We will be monitoring the truck in a month’s time to see how it is performing.

After three months, we will also do a wear survey on the liners to see how long the liners will last. Should they last more than six months, it will be a 100% gain for the customer, from a financial point of view.”

Rio-Carb is the only local liner plate and equipment manufacturer that follows international welding standards. Its liner plates are etched at the back with a unique number of identification and recorded in the company’s database. All the designs are computerised, so the company does not have to go back on site to take measurements and redesign them when they need to be replaced.

“Once the test is successful, we will be able to supply liners for more of Danoher Construction’s earth moving equipment. The company has other trucks that require lining, so it’s a great opportunity for us. We hope this new service of fitting our liners to dump trucks will be the first of many, and we know it will work out and become a success,” Garcia concludes.