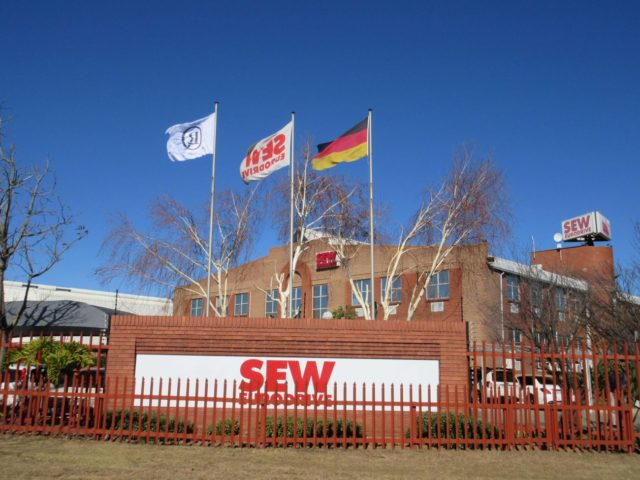 The OEM plans to ramp up its local assembly operations, with an expanded assembly facility on the cards.

SEW-EURODRIVE’s commitment to South Africa and the continent is underscored by the fact that the bulk of its regional turnover is still generated by the mining and minerals-processing industry. This is because the OEM remains a leading innovator and solutions provider in bulk materials handling and conveying technology.

Paying a visit to the South African head office in Johannesburg recently, SEW-EURODRIVE GmbH president and MD Jürgen Blickle commented that while the mining industry was still in a slump, “we are still very strong in mining”. Blickle revealed that the OEM planned to grow even stronger in this sector by ramping up its local assembly operations, with an expanded assembly facility on the cards.

Another key focus for future growth was boosting the aftermarket sector, which has seen SEW-EURODRIVE South Africa establish a new Field Service Department and Repair Centre. “We want to increase the service business, including servicing brands other than our own. This is an international trend, whereby we find customers approaching us for this particular service,” Blickle stressed.

However, Blickle added that the main focus is still offering complete replacement units wherever possible. “As so many of our products are largely identical and interchangeable, we will simply offer a replacement unit as opposed to repairing an old one.”

SEW-EURODRIVE’s success on the continent is indicated by the fact the South African company celebrates its 30th anniversary this year. Blickle explains that the OEM’s manufacturing base is distributed among 15 facilities globally, in addition to 75 assembly facilities, including Johannesburg. “Hence we are a truly global entity. The fact that we continue to invest significantly in South Africa is an indication of our commitment to the country and its economy.”

A distinct advantage of the OEM’s global footprint is an international pool of project and application experience. This not only encompasses manufacturing capability, but also an excellent grasp of local conditions and specific requirements. “What gives us the leading edge is not only how we manufacture our products, using the latest methodologies and technologies, but our in-depth knowledge of highly-technical sectors such as mining, food and beverage and automotive,” Blickle elaborated.

[quote]In South Africa, the Johannesburg assembly facility has invested significantly in installing the latest assembly islands to streamline production and reduce waste, an upgrade that will be carried through to the local branches in Nelspruit, Durban, Port Elizabeth and Cape Town.

Elsewhere on the continent, the OEM has just established an assembly facility in Morocco, with representation in a range of countries such as Tanzania, and Dubai in the Middle East. It also has various partnerships on the continent, including Tunisia and Egypt, whereby the OEM undertakes to service and support all of its products sold.

Blickle stresses that the ongoing success of SEW-EURODRIVE is largely due to the fact that, although it is a multinational company, “we always tend to do business like a family, and we feel like a family. I think that is unique, with not many other companies able to lay claim to a similar ethos underpinning their global organisation.”

This means that regional hubs, such as the Johannesburg head office, continue to play an integral role in the OEM’s growth and expansion and focus on innovation. “Each country and its facility are equally important to us, especially as these mirror the spirit of SEW-EURODRIVE. This also means that our regional experience and knowledge of local conditions and specific customer issues gives us a leading edge internationally,” Blickle concludes.