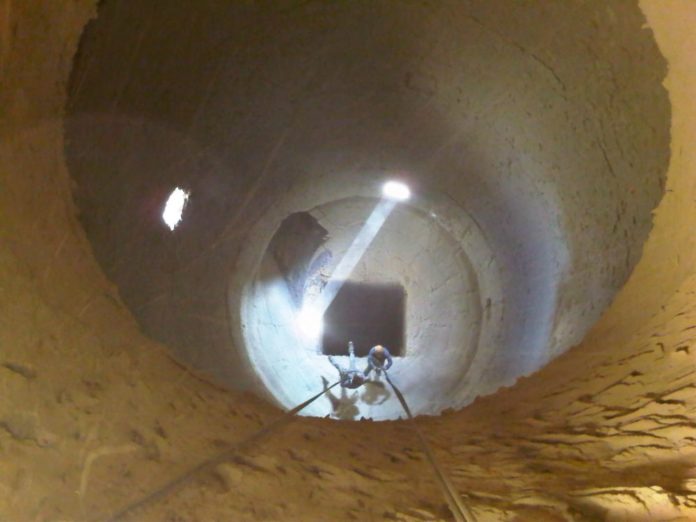 The silo, which houses 10 000 t of coal, needs to be cleaned at least once a year. The coal that builds up due to various issues such as moisture, needs to be removed before blockage occurs.

Rope access is by far the most cost effective and less time consuming way of inspection and maintenance compared to traditional access systems.

Skyriders undertook work on the various silos at the power station and began maintenance on the last silo in the beginning of December 2015 and completed it in the mid-February 2016 due to outage schedules. The physically demanding task required the specially trained technicians to access the silos from the top.

Skyriders marketing manager Mike Zinn notes that silos experience various areas of coal build-up due to various issues, therefore the coal does not flow out of the silo and adheres to the walls, changing the load dynamics.

“During the maintenance period, our technicians go inside the silo from the top using rope access and help get the coal loose and restore flow to the hoppers until it is completely empty, then they can start loading the silo with new coal.”

The maintenance shutdown allowed the eight-man team to undertake its work during the day only. They used safety lighting for visibility in the coal dust environment and confined space equipment, such as specialised gas monitors, used to monitor toxic gases such as carbon monoxide.

Since the gas levels inside the confined spaces can change at any time, the detector sends a warning for a quick exit of the team.

According to Zinn, the dust levels in the silo are high due to the large amount of coal moving inside. “Extreme caution is applied when entering the silo and the team is required to be aware of spark hazards or anything that will create sparks or a potential explosion. However, before carrying out maintenance and inspections, the team has to help the coal to move out of the silo, which can be a challenge to untrained personnel.”

“Only trained personnel can do this type of work or should at least be on stand-by, as this is one of those dangerous areas of speciality, whereby a mistake due to the height or confined space might lead to an injury or a fatality,” Zinn concludes.