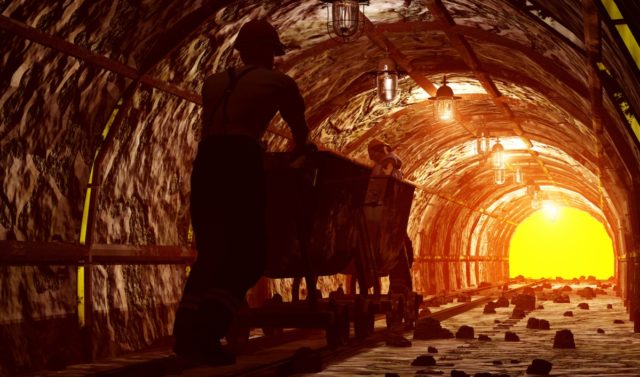 Palabora Mining Company was registered in 1956 by Rio Tinto. The mining of the commenced as an open cast mining operations in the year 1965 and the last blast in the pit was taken in the year 2002. At this time the site was a well-established mining complex and a reputable refined copper producer in South Africa. The final dimensions of the pit are approximately 1 600m and 1 900m across in diameter and 825 m deep, ranking as one of a kind mining pit in the country.

The impending uneconomical exploitation of the reserves in the pit resulted in a studying the possibility of mining the orebody from underground. A decision to build an underground mine was reached in the year 1996 and execution commenced shortly thereafter. The result was mining of a 450m high, 700m wide and 200m long block through 332 drawpoints within 20 production drawpoints. This is a fully trackless operation, both secondary blasting and ore hauling. The material is handled through 4 crusher and conveyor belt arrangement. The production steady state of 30kt/day was reached in the year 2005.

Naturally, the depletion of the reserves posed yet another question around business’s sustainability. The answer was the Lift II, i.e. construction of a new mining block below the current mining operation. The regional geology knowledge and extensive exploration drilling over the many years of mining in the area revealed that the pipe like nature of the orebody, it extends further down at a near vertical angle.

The Lift II project was approved to extend the LOM by a further 13 years. This decision was made in the late 2013. This made way for a construction of the mining block 430m below the current Lift. The construction entails the shaft systems, i.e. Twin declines, crusher complexes and 434 production drawpoints. The lessons learned with the Lift I design, construction and operation form the base of all the works on Lift II, this from the studies to the execution. The Project is in a full blown execution phase, the development of the decline system is complete and the accesses to both the south and the north of the footprint, the ventilation level and undercutting level has been established. The development is carried out by a contractor under an alliance contract with the owner/client.