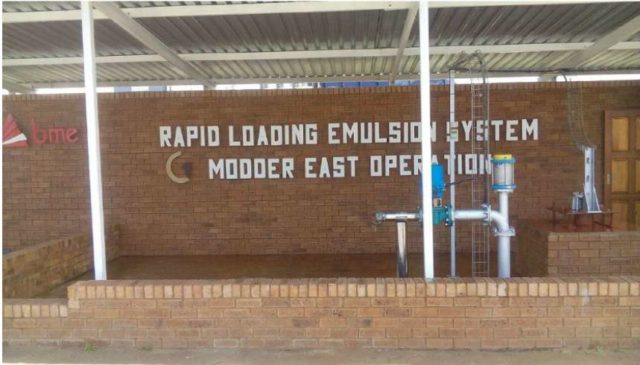 Gold One’s operation is the Modder East Mine, the first new mine to be built in South Africa’s gold-rich East Rand region in over 30 years. With a currently defined ore reserve of 1.53 million ounces at 4.0 grams per ton and a 13 year life of mine, Modder East’s target reefs are located no deeper than 500 meters below surface. The mine’s shallow resources allow for trackless mine infrastructure where the underground ore body is accessed via a decline.

Dedicated trucks transport rock out of the mine while a vertical shaft provides quick face access for personnel.
Modder East’s first 240 ounce gold pour took place in July 2009.The mine’s first ton of gold was poured in May 2010, only 10 months after its commissioning.

At Modder East Operation all the main development is a trackless mechanized system. This facilitated the use of emulsion and the shock tube system for blasting operations whilst the narrow reef stoping operations used the cartridge explosives, and shock tube initiating system.

In the latter part of 2012 Modder East made a decision to change all blasting operations over to emulsion system for the following reasons:

In order to assess the benefits of emulsion in narrow reef stoping operations a three month trail was undertaken by Sasol and BME to determine the most effective emulsion system.

The road to 2023: What to look out for ahead of Nigeria’s elections