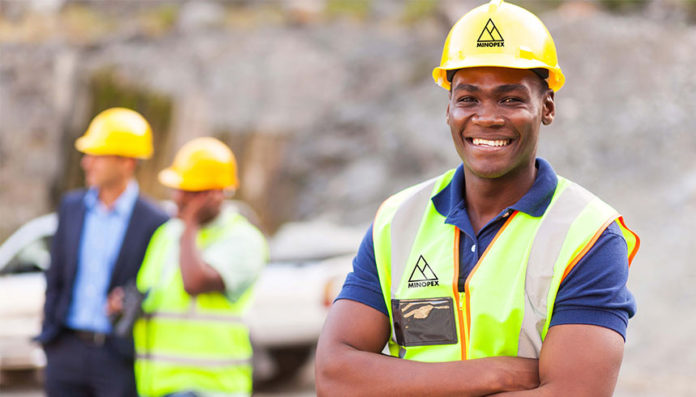 “Whereas the sector’s production declined by 5% in 2016 on 2015, the latest improved performance shows that mining only contracted by 1% on an annualised,” says Chamber of Mines chief economist, Henk Langenhoven.

“This is very encouraging news indeed. Production in the month of March was 11% better than a year ago,” he adds.

The different commodities within the sector showed varied performances as illustrated by the graph below. 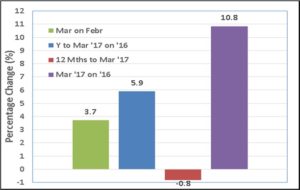 Only the production of building materials and copper was lower in March than in February. Best performances came from (highest to lowest), diamonds (+23%), manganese (+14%), nickel (+11%) and chrome +10% says the Chamber of Mines. 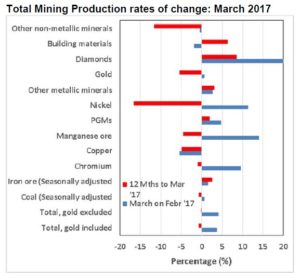 “A great deal of recovery is still needed when the production performances of the different commodities are evaluated for their annual performance. Compared to a year ago, nickel (-17.0%), gold (-5.4%), copper (-5.0%) and manganese (-4.5%) need the most production improvement to outperform 2016 levels,” explains Langenhoven.

This production data report is the fourth ‘wave’ of indicators showing the progressive impact of improved international economic growth and demand for commodities, higher prices and sales, as well as improved profit performance on the mining sector.

“The Chamber of Mines will be looking for signs that employment losses will finally come to a halt and possible signals of improved investment. International reports indicate that the decline in exploration expenditure seems to have finally been arrested.

“Uncertainties still prevail though, including concerns relating to regulatory uncertainty and impact of the ratings downgrade. Declines in the platinum price and negative sentiment around iron ore prices, amongst others, underscore this,” concludes Langenhoven.

In April the Chamber of Mines highlighted that job losses in the mining sector had slowed down substantially compared to two years ago.