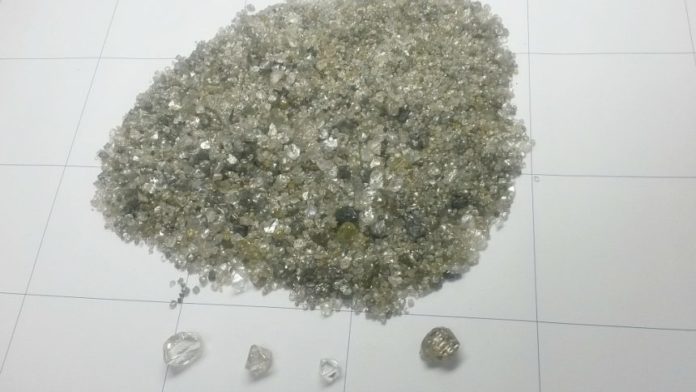 August represents the first month of commercial production and processing of kimberlite mined at Lace after July production was impacted by a two-week  shutdown of operations due to a fall of ground accident in a development tunnel.

Production from the first mining block on the 310 m underground level at the Lace mine successfully restarted last month and is now proceeding at the planned rate of 30 000 tpm, averaging 31 cpht – in line with the base case forecast for this first mining block.

The quality of the diamonds recovered from fresh kimberlite also continues to be impressive thanks to a good proportion of clean sawable stones in all size fractions, including type IIa diamonds. The new rolling stock acquired to ensure production targets are met is also providing excellent availability.

DiamondCorp’s diamond sales schedule has been revised to commence in Antwerp at the end of August and then continue monthly for the rest of the year.

A search is underway to recruit a finance director and new non-executive directors who can strengthen the company’s board and deliver improved operational and financial control now that DiamondCorp is in commercial production the company states.

In the period from March to July, DiamondCorp mined a total of 25 103 t from the west slot between the 290 m and 310 m levels which provided the open space for blasting of trough material which is now being mined.

The west slot is positioned on the contact between the high grade K4 kimberlite and lower grade K8 and K6 material, which for the most part, will not be exploited by the mining method being utilised for the UK4 Block.

Approximately 40% of the tonnes mined during slot development were low grade material which had to be moved ahead of commercial mining commencing in the high grade block. Total diamonds recovered from the slot material was 4 601 carats.

Mapping of the development tunnels for the trough, and the mined slot area shows that the K4 unit is less diluted with waste rock moving away from the contact and grades should continue to improve as mining of the current block progresses.

Thanks to its new rolling stock, the older trucks which have been taken out of service, will now enter a rebuild programme to ensure back up vehicles are always in place in the future.

The sale is expected to be of approximately 7 000 carats, which is slightly lower in total numbers than forecast due to sale of parcels in Johannesburg during the export process in June (which comprised 1 838 carats of run-of-mine kimberlite diamonds and 1 679 carats of tailings diamonds) and the shutdown of operations in July due to the fall of ground accident.

Subsequent sales are forecast to be in the order of 9 000 – 12 000 carats depending on monthly grade fluctuations.