As a result, mining production performance for the year to date (six months) has now declined to an improvement of under 5% compared to the same period in 2016. The 12-month comparative figure has now dropped to 2.1%.

There is no doubt that this decline in mining production is largely explained by a combination of the uncertainty regarding commodity prices and the strengthening of the rand exchange rate against the dollar.

[quote]The rand was on average nearly 16% stronger against the dollar over the first seven months of 2017, compared to last year. It strengthened by over 5% since January 2017.

This has materialised. In July, there was a slight improvement in the landed rand prices for SA commodities; this may indicate that July mining production (when released next month) could be on par or slightly better than the June number.

There are significant differences in the mining production performance of individual commodities.

Depending on whether the comparison is done on a monthly basis (June against May 2017) or the first six months of 2017 against the same period during 2016, or over a 12 month period, the answers differ substantially even for the same commodity.

Monthly comparisons in mining production typically show recent disruptions, while the 12 month performance gives an idea of whether a commodity is on track to produce more or less than the previous year, i.e. growing or declining. 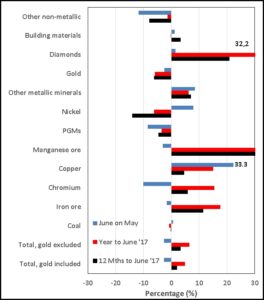 “Trends in commodity prices and performance of the rand have an enormous impact on the mining sector’s profitability,” says Chamber of Mines chief economist, Henk Langenhoven.

“Any additional uncertainties, like the potential electricity price increase as well as the legal and regulatory uncertainties relating to the Department of Mineral Resources’ Mining Charter detract from the sustainability of the sector.

“The latest announcements of mine closures and further potential closures are serious signs of this,” concludes Langenhoven.