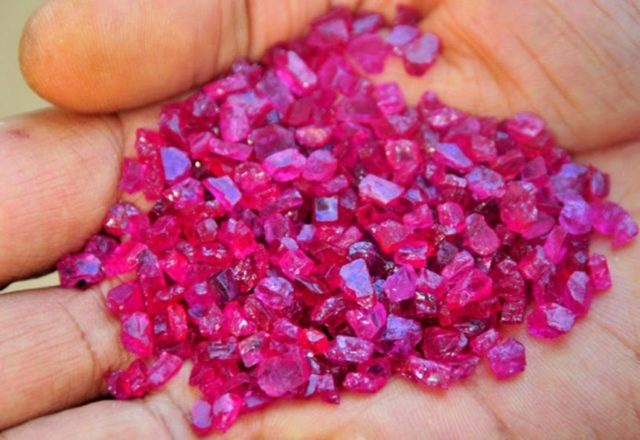 Mustang Resources has agreed to acquire a 65% interest in a highly strategic ruby license bordering its Montepuez ruby project in Mozambique.

A site visit undertaken by ASX-listed Mustang Resources consultant, Paul Allan, has confirmed that artisanal miners are recovering large, high-quality rubies from this license area, which also borders one of the key ruby deposits being mined by London-listed Gemfields.

Following completion of environmental permitting, Mustang Resources will immediately launch a prospecting programme, including mapping, auger drilling and trenching to determine a preferred location to open a bulk sampling pit. The company will then start processing gravels from the priority areas identified, further enhancing the current bulk sampling programme and ruby sales planned for 2017.

To support a further increase in the drilling and bulk sampling campaign and to accelerate its development plans within the expanded project area, Mustang Resources has undertaken a capital raising, receiving binding commitments for up to US$5.88 million from existing and new institutional and sophisticated investors. The placement has been heavily oversubscribed.

Mustang MD Christiaan Jordaan said the acquisition of the new license was another important step in the company’s strategy to become a leading global supplier of premium-quality rubies. “We recently achieved our target of tripling the throughput rate on our bulk sampling and we now exceed it regularly,” he said.

“The first rubies sent to the US earlier this year are well advanced in their preparation by leading cutter and polisher Meg Berry for certification and sale.

“These near-term sales will enable us to value our rubies and are a key input into our feasibility study,” Jordaan noted.

It will also pave the way for Mustang Resources to record its first sales revenue before the middle of this year. The global market for rubies is growing rapidly and Mozambique stones are in particularly strong demand, as shown by Gemfields’ success.

The acquisition of a 65% interest in this strategic and highly exciting new license will help Mustang Resources to capitalise on what it believes is an outstanding opportunity for the company and its shareholders.”