ASX-listed Lucapa has reviewed development plans and optimised pit design and mine plans for Mothae to maximise targeted diamond production and cash flows.

The review and optimisation work has now been completed and the new mine development plan has been adopted by both the Mothae and Lucapa Boards and the Government of the Kingdom of Lesotho (GoL), which retains a 30% interest in Mothae.

These improvements to targeted production and cash flows include: 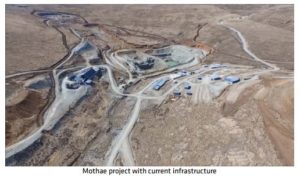 The improvements in targeted kimberlite to be mined, carat production, net cash flows and mine life are derived primarily from increasing the size of the phase 1 diamond plant from 100 tph to 150 tph and pit optimisation reviews.

The targeted mining and treatment period under phase 1 remains unchanged at approximately 34 months, with first production scheduled for early H2, 2018.

During phase 1, scoping and other studies will be undertaken for the phase 2 development, which is planned to follow thereafter.

Significantly, the larger 150 tph plant can also be utilised more completely in the proposed phase 2 Mothae development plan, under which a second 150 tph module is designed to be installed in parallel to the phase 1 plant to achieve the targeted 300 tph Phase 2 throughput.

In addition to the larger plant, the pit design resulting from the new mine plan has been optimised and is now set to extract kimberlite to approximately 300 m.

This compares with a total depth of 255 m in the original pit design and mining plan. 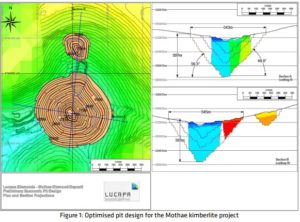 Under the new mine development plan, phase 1 is budgeted to cost $17 million (including estimated pre-production overheads), of which approximately $1.5 million has already been funded by Lucapa to date through various long lead item deposits and work streams.

The larger 150 tph plant and resultant larger water reservoir account for most of the $5 million increase over the $12 million budget estimated for the original 100 tph development.

In addition to Lucapa’s cash resources, it has secured a $15 million facility to fund the phase 1 Mothae development from Equigold, a company associated with prominent Singaporean-based resources investor Simon Lee AO.

Further to this, Lucapa is also pleased to advise that the GoL has – as a result of the increased direct foreign investment into Lesotho from the new mine development plan – agreed to assist Lucapa with the additional up-front investment by deferring the remaining consideration payments due from Lucapa on the $9 million purchase price of Lucapa’s 70% interest in Mothae.

Lucapa has already paid the GoL $4.5 million of the $9 million Mothae consideration to date and was due to pay the US$4.5 million balance in eight monthly instalments starting in October 2017.

With the consent of the GoL, the payment of this US$4.5 million in monthly instalments has been deferred, and will now commence in June 2018. 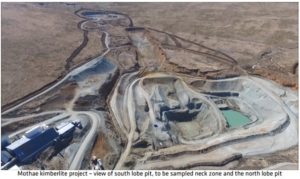 Lucapa MD, Stephen Wetherall, says Lucapa looked forward to delivering on the new and optimised Mothae mine development plan to complement the high-value diamond production from the Lulo mine in Angola.

“Mothae was already a compelling project and the optimised mine plan is set to enhance both the economics and production profile, targeting improved returns for all direct and indirect stake holders in the project,” explains Wetherall.

“We now look forward to bringing Mothae into production early in the second half of 2018 to add a high value kimberlite production source to our exceptional Lulo alluvial production,” he concludes.