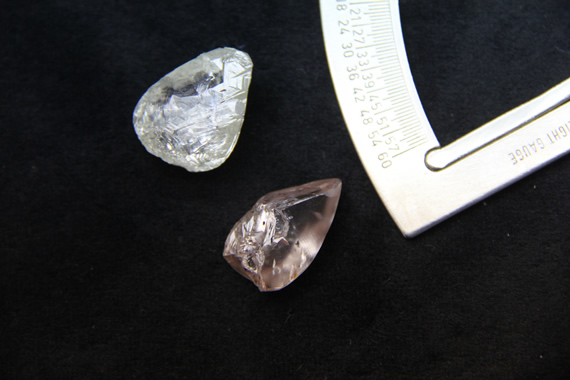 Willemse, who took of the reigns of dual-listed alluvial diamond miner Rockwell Diamonds earlier this month when former CEO James Campbell tendered his resignation following a strategic board review of the company’s operations on 28 August 2016, believes that that the business finds itself “in a state of despair” for a number of reasons.

“There has been a general breakdown in controls over a considerable period of time, non-adherence to the procurement policy, amongst others, being very prevalent,” Willemse said in a statement last week.

“This, coupled with inadequate work planning and the lack of project front-end loading has led to a series of financial management concerns and business risks, he said.

“Blurred lines of accountability, both within the organisation and between the company and some of its service providers, does not bode well for proper management and control of the business,” he added.

Rockwell Diamonds’ is placing immediate focus on the implementation of a new contract for outsourced mining services and sale of the company’s earthmoving vehicle fleet and transfer of two thirds of the company’s staff. The contract will be structured to externalise risk from variance in mining volumes and equipment availability.

Rockwell will also commission the third and fourth line of the Wouterspan wet plant during October 2016 – the first two lines of which will be fully commissioned this month.

The new strategy is also aimed at reviewing the current mining plan at Remhoogte to reflect a reduced Rooikoppie resource and less economic Palaeo gravels and will also focus on the shut-down of Saxendrift during September 2016 and exploration drilling and bulk sampling in the vicinity of Wouterspan.

In addition, the company will focus on assessing potential kimberlite acquisitions to increase stability in monthly production and cash flow.

This new focus is the result of a detailed board review and intervention in late August as a result of the performance of its Remhoogte acquisition, which has been below plan, and the construction of the new Wouterspan plant that is behind schedule with a higher cost.

The result of the review included a change in certain roles and continued close monitoring by the board of operations and project performance on a weekly basis.

A five-year mining agreement has been concluded with C-Rock Mining (CML) for the provision of contract mining services at Rockwell’s Wouterspan mine with a similar agreement to follow for Remhoogte.

This is structured to mitigate the volume and availability risks associated with the company’s earthmoving fleet and its uneven operating performance to date.

The contract provides for all mining and associated rehabilitation activities at a fixed fee per unit material delivered at the plant, with adjustments and where necessary termination for underperformance of the contractor or volume reductions implemented by the company for business reasons.

Rockwell has been granted a prospecting right over the Daniel alluvial deposit, a diamondiferous fluvial-alluvial gravel deposit associated with the adjacent Finsch diamond mine in the Northern Cape Province.

Limited modelling based on percussion drilling by the previous operator has identified extensive diamondiferous gravels within the palaeo-channel structure.

However, further work by the company is still required to assess economic potential.

Rockwell’s operations at Saxendrift, the company’s production mainstay since its acquisition from Trans Hex, have been suspended as anticipated following recent economic performance.

Commercial options on how to deal with this asset consisting of plant and remaining resource are currently being evaluated, royalty miners and relocation of fixed infrastructure being some of these.

Production volumes were down by 4% in the three months ended 31 August 2016, on the first quarter of 2017 and 8% on the second quarter 2016, due to the planned scaling down of operations at Saxendrift, which was partly compensated by a 10% increase in volumes processed at Remhoogte.

Middle Orange River grades were down by 7% on Q1 2017 and 8% on Q2 2016, owing to diminished recoveries from the middlings material at Saxendrift (which was down by 13%) and reduced grades at Remhoogte (down 14%).

Rough diamond inventory of 700 carats were carried over into the third quarter of fiscal 2017 (including royalty contract goods).

“Following some changes to the team, and with the full co-operation of the remaining management and the outgoing CEO, the board-led intervention with myself as the new leader will continue.

“I am pleased to report some significant progress has already been made,” says Willemse, adding that the company would update its stakeholders in more detail when it releases its quarterly results next month.