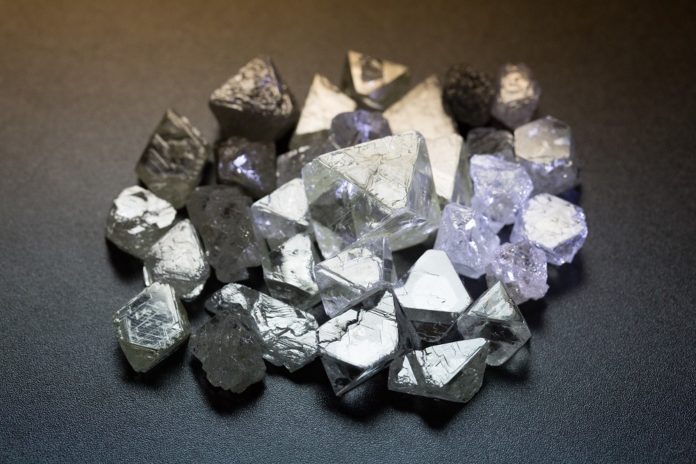 This announcement was part of Rockwell Diamonds’ quarterly production and sales update for the three months ended 29 February 2016.

Despite a company restructure and some recent operational challenges, it continues to pursue its medium term target to process 500 000 m³ of gravel per month in the Middle Orange River (MOR).

The approved recommissioning of operations at Wouterspan is expected to absorb a large proportion of the Saxendrift workforce and equipment.

A change in the operational parameters at Saxendrift has allowed closure to be postponed beyond the planned end of February to May 2016. The second of the three-year royalty mining contracts entered into by the company commenced post February 2016 and Rockwell Diamonds is assessing further royalty proposals to continue to extract further value from the Saxendrift property.

All diamonds recovered by royalty miners at Saxendrift will be sold by the company through its sales system and 10% of gross sales will be retained by the company as a royalty.

[quote]The recommissioning of Wouterspan and redeployment of existing processing and mining equipment from other operations began early in 2017FY, Q1 as planned.

Work on the construction of the processing plant is on schedule to deliver a plant and IFS capable of processing 200 000 m³ per month by September 2016, with ramp-up commencing late May 2016.

A second phase, to further increase the plant throughput to 400 000 m³, is under consideration.

Exploration is advancing on the neighbouring properties surrounding Wouterspan, where 4 300 hectares have been mapped, 1 700 pits have been dug and a further potential 2 200 pits will be dug.

Rockwell Diamonds construction and commissioning of additional in-field screening capacity at its Remhoogte – Holsloot Complex (RHC) is on track and are designed to increase processing capacity at RHC up to 180 000 m³ of gravel per month.

The Rockwell Diamonds Johannesburg corporate office has been closed, staffing reduced and key senior company executives have relocated to the MOR on a full-time basis.

Operational reporting structures have been streamlined; mine management is now directly accountable for all mine operations, reporting to the CEO who is based full-time in the MOR.

The company-wide Section 189 consultation process has come to an end early in Q1, FY2017, with formal notices soon to be served to affected employees. Every effort has been made to redeploy employees wherever possible and mitigate the impact of retrenchments.

James Campbell, Rockwell Diamonds CEO and president says: “Following the acquisition of the two operations and in spite of the constraints that continue to limit our ability to invest, we were able to construct and commission two in-field screening facilities at Holsloot and Remhoogte, which along with the implementation of our revised EMV strategy should increase throughput capability to a sustainable 180 000 m³ per month.”

“The recommissioning of a 200 000 m³ operation at Wouterspan, which is making good progress, is another significant achievement which in time will more than replace Saxendrift and absorb many of the skills and equipment from there as well.”

“As we strive for a safe and sustainable monthly processing target of 500 000 m³, our search for new value opportunities continues, with exploration activities gaining momentum during the quarter. The recent streamlining of corporate structures is expected to deliver tangible cost saving benefits in the short term.”

Gravels processed were 40% down year-on-year owing to the changed operational profile, with new production from RHC only partly compensating for the drop in volumes following the sale of Tirisano, the suspension of activities at Niewejaarskraal and the depletion of resources at Saxendrift.

Overall, grades were up both quarter-on-quarter and year-on-year. RHC recorded significantly higher grades of 1.12 cphm³, compared to 0.64 cphm³ in the previous quarter, but on slightly lower volumes.

MOR carat sales were up 22% quarter-on-quarter to 4 925 carats, and the value of these goods increased 34% to US$7.1 million (excluding beneficiation).

Average carat price realised from the company’s MOR projects improved by 9% quarter-on-quarter, to $1 448 per carat.

490 carats (including royalty contract miners’ inventory) were carried over into the first quarter of fiscal year 2017.

Operational focus remains on addressing throughput bottlenecks and a review of mining efficiencies, costs and reliability of the fleet.