The coal mining sector in South Africa was applauded by Chamber of Mines president Mike Teke on Thursday for its continued improvement in safety performance.

Teke made the announcement in Secunda, in attendance with the Chamber of Mines at the CoalSafe 2016 conference, hosted by the South African Colliery Managers’ Association (SACMA).

“We commend the coal industry for its continued improvement in safety performance. We further note that Minister of Mineral Resources Mosebenzi Zwane congratulated 16 companies for operating without any fatalities for a period of more than 12 months at the annual announcement of safety statistics in Pretoria in January this year,” Teke stated. 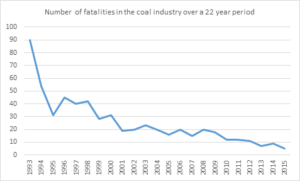 Teke added: “While we recognise that work towards ensuring that each and every mineworker returns from work unharmed every day must continue, we are gratified to note the continuing improvement in safety performance across the mining industry.

“We extend our thanks to those who are involved in the rescue attempts at Lily mine owned by Vantage Goldfields. Our thoughts continue to be with the employees and family members of those affected by this great tragedy,” he concluded.

The Department of Mineral Resources’ (DMR) minister Mosebenzi Zwane in January announced South Africa’s 2015 mining health and safety statistics which were an improvement on 2014, but only marginally.

77 fatalities were reported in 2015, compared to 84 in 2014. While this equates to an 8% improvement year on year, it is only seven fatalities less.

Nonetheless, “it is a noteworthy achievement” Zwane stated on the day, adding that the numbers are “the lowest ever fatalities recorded in the mining sector and a result of the collaborative efforts between all industry stakeholders.”