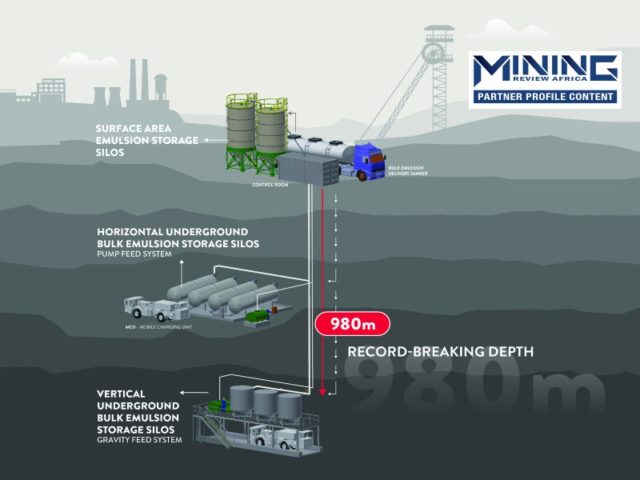 In a recent expansion project of its Chambishi mine in Zambia, Non-Ferrous China Africa (NFCA) opted to install AECI Mining Explosives’ emulsion vertical delivery system (EVDS) as part of its aim to develop a cost-effective mining operation. Delivering both the emulsion and sensitizer at depths of up to 980m.

NFC Africa Mining PLC (NFCA), is one of the largest underground mines in Zambia’s Copperbelt province. The Mine was initially called Chambishi Copper Mines under the management of the Zambia Consolidated Copper Mines currently called ZCCM-IH. China Nonferrous Metal Company (CNMC) took over later in the year 1998 while it was under care and maintenance.

NFCA and Sandvik Mining and Construction entered into a partnership to develop a highly automated and digitalized Mine in Africa. At the SEOB, we are using intelligent Sandvik latest equipment with new technology. This investment is for equipment, infrastructure and other costs involving mining.

They recently introduced a new shaft at its Zambian-based Chambishi Mine, which included a number of leading edge technologies, such as AutoMine@Lite, AutoMine@fleet, OptiMine and Fuel vertical drop aimed at developing the most cost-effective mining operation.

Having previously engaged AECI Mining Explosives on this system in 2012, NFCA was already aware of the benefits of the EVDS. This integrated system delivers the base emulsion, and sensitizer required directly to a storage facility underground.

The company was already using AECI Mining Explosives’ emulsion product underground – the UG200S (sticky) product ideal for up hole charging – and wished to continue reaping the benefits of this emulsion. The Mine requested that both emulsion and sensitizer products be delivered to its 680 m and 980 m mining levels.

AECI Mining Explosives analysed the space available, product demand, and blasting schedule of the client in order to provide an optimal surface and underground storage capacity, as well as a tailor-made delivery system. Various installation options were considered to meet the Mine’s requirements and to ensure that the system could be operated safely and sustainably.

Michael Woolridge, explains that the agreed scope was a joint venture in which AECI Mining Explosives supplied all fabricated plant and equipment, as well as engineering and project management expertise to manage the installation and commissioning of the Project. NFCA was responsible for all installation work on site.

The process design and product testing were managed by a team of AECI Mining Explosives specialists and ELB Engineering, the technology partner for the EVDS. The local AECI Zambia team paved the way for a successful installation and was instrumental in the outcome of the Project.

“A contract was signed with NFCA at the end of July 2018 and work commenced on January 1, 2019,” explains Woolridge.

“The installation was finalised at the end of January 2020, on time and within budget. The project scope included the supply and delivery of all plant and equipment, the preparation of the site, drilling of the borehole, blasting of the underground cavities, as well as installation and commissioning.”

On February 5, 2020, the first emulsion was dropped to the 680 mining level, followed by a drop to the 980 level the following day. The system was immediately available at full capacity and continues to operate as such.

Before the EVDS was installed, the Mine utilised 4-tonne emulsion cassettes that were reloaded on the surface and transported via the cage network to each level.

This methodology was costly, compromised the quality of the product and time consuming, says Woolridge, while delays caused by double handling, cage times and spillages at decanting points were commonplace.

Thus, the critical consideration for the Mine in opting for AECI Mining Explosive’ EVDS was to free up cage time to enable the Mine to increase hoisting capacity, which is the usual bottleneck on most mines, given that you can only mine what you can hoist. The solution would also provide seamless inventory control of emulsion from delivery to the mining face.

“A dedicated vertical delivery system and associated storage capacity allow the client to always have emulsion available ‘on tap’ at both the 680 and 980 mining levels, while at the same time freeing up cage time for other activities.

“The client expected full availability of these benefits on completion of the Project, something AECI Mining Explosive’ has managed to deliver from the first day of commissioning,” says Woolridge.

In a nutshell, the key benefits the client has realised, include improved safety; seamless inventory control; reduced interface with explosives; optimised ordering, delivery and charging units refilling; reduced maintenance, fuel and asset wear as well as reduced risk of theft. Other gains include reduced time and labour resources.

The first is that such products are shear sensitive and will deteriorate when exposed to shear. Pumping of emulsion explosives over long distances will introduce such shear. Shear can reduce the usability of the product and may lead to pipe blockages.

“The second characteristic is the minimum burning pressure of the product. Unsensitised explosives are relatively insensitive to sources of heat, but above a certain pressure threshold, the emulsion becomes sensitive to the source of energy.

“Should a blockage occur in a vertical line for whatever unforeseen reason, hydrostatic pressure will build up in the vertical line that may exceed this minimum burning pressure,” he explains.

These two characteristics, says Woolridge, have previously restrained the depth of emulsion vertical delivery systems. AECI Mining Explosive’ R&D department has conducted work to develop an emulsion product that can be delivered under specific conditions to minimise the effect of shear. Rheology models have been developed to predict flow characteristics of the product under various conditions.

Getting the better of challenges

Although successfully delivered, the Project was not without its challenges. It was also the first time that AECI Mining Explosives and NFCA worked together on joint design, supply and construction project of this size and nature.

The key to any ground-breaking project is for both parties to acknowledge the unique nature of the Project and the risks and challenges that can be encountered along the way.  Furthermore, the role each party has to play to ensure a successful outcome is of critical importance.

The Project had significance for both parties – it allowed NFCA to optimise its operation further and provided AECI Mining Explosives with the opportunity to demonstrate that it had the capability of delivering its emulsion product via this innovative technology to depths in excess of 900 m.

The risk of misinterpretation of highly technical information due to the language barriers was identified early on in the Project, and efforts were made by all parties to verify any misunderstanding of information.

“The project teams evaluated the requirements of each phase of the installation and agreed on the provision of on-site expertise as required. “We are excited about the prospects this ground-breaking installation holds for our global mining customer base.

It again confirms that we are leading the industry when providing the mining industry with technology leading innovations and solutions,” says Edwin Ludick, Managing Director for AECI Mining.