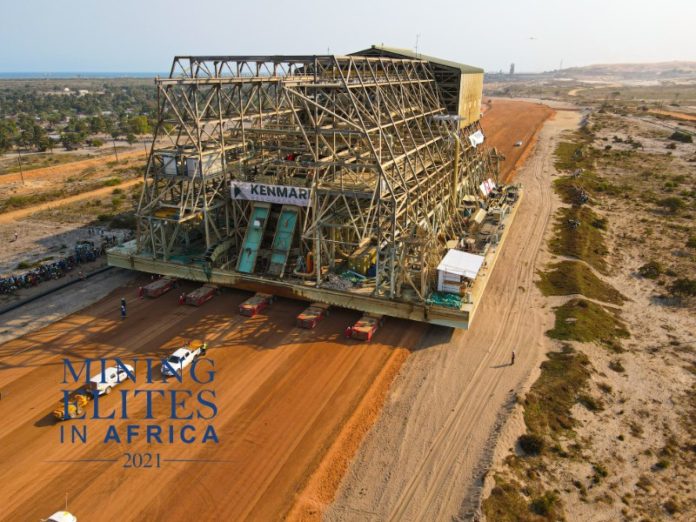 Kenmare Resources, listed on the LSE and the Euronext Dublin, spent the latter half of 2020 relocating its Wet Concentrator Plant (WCP) B at its Moma titanium minerals mine in northern Mozambique – a hefty feat.

With the move taking mere weeks, the relocation had a hefty price tag of US$106 million, which gives some idea of the scale and complexity of the project.

WCP B was moved from Moma’s Namalope ore zone, where it began mining in 2013, to the high-grade Pilivili ore zone, 23 km away. While Kenmare identifies the relocation as a growth project (as it is critical to the company reaching its target production of 1.2 Mtpa of ilmenite and co-products by 2021), it can also be seen as a stay-in-business initiative.

“A really innovative way of extending plant life and so reducing expenditure on a new plant.” – Jim Pooley

Pilivili has the highest grades within Moma’s portfolio of resources and its development is key to the mine’s sustainable future. It will support mining operations for eight years after which WCP B will mine its way to the adjacent ore zones of Mualadi and Nataka.

In an exercise which is probably unique within Africa’s mining industry, WCP B, which has a total weight of approximately 7 000 t, was transported along a purpose-built, 66 m wide road using platform vehicles called self-propelled modular transporters (SPMTs).

The contractor awarded the contract for the move is ALE, a heavy lifting and transport specialist based in the UK.

ALE was acquired by Mammoet, a privately held Dutch company, in January 2020. For the WCP B relocation, ALE/ Mammoet is using 68 SMTPs linked together and controlled remotely by a single operator.

The SMTPs travel at a speed of 2-3 km/h, resulting in a journey time of approximately 48 hours from Namalope to Pilivili.

When planning the project, Kenmare considered a number of different methods of relocating WCP B, including disassembly/ reassembly and alternate transport options for the assembled plant by road and/or sea.

Moving the assembled plant by road presented the lowest risk profile. A full feasibility study on the relocation was carried out by Hatch Africa and included an independent peer review process.

This is an increase in electricity consumption from the +-32 MW of power used at Namalope – necessitated by the power required for the new pumping station, which should take Moma’s total power requirement to about 35 MW.

A project of this magnitude and scale is an impressive feat under any circumstances, and even more so considering the movement restrictions caused by COVID-19.

But with around two years of planning undertaken to lead to the execution of the relocation project, Kenmare Resources has shown resilience and determination to see the project move ahead regardless – and it has, quite literally.

Moma, which started operations in 2007 and achieved commercial production in 2009, is currently the world’s fourth largest producer of TiO2 feedstocks.

It is a significant contributor to Mozambique’s economy and accounted for around 5% of the country’s exports in 2018. It directly employed over 1 400 people at the end of 2019, with 96% of them being Mozambicans.