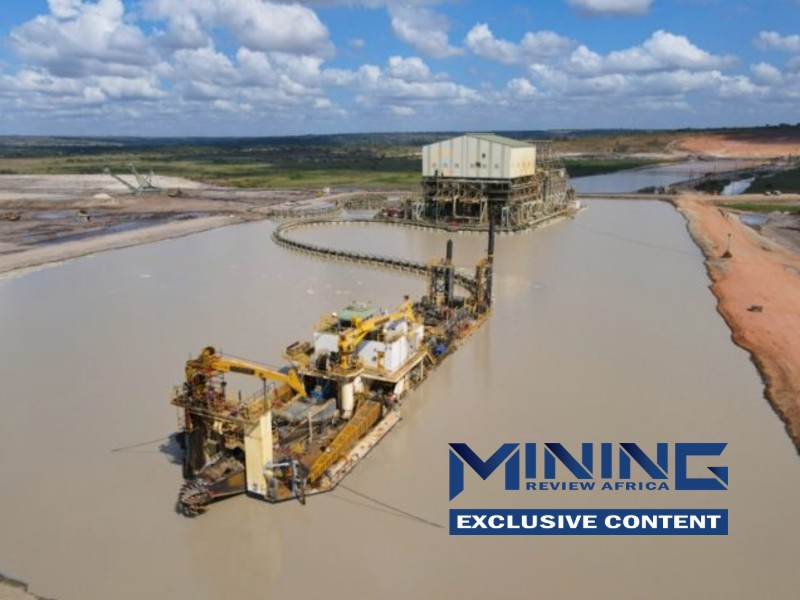 The latter half of 2020 saw LSE/ISE-listed mineral sands miner Kenmare Resources successfully achieve what most might consider an incredibly challenging task – relocating its Mozambique-based Moma operation’s Wet Concentrator Plant B (WCP B), in its entirety, from its original home in Namalope to its new home in Pilivili – in just less than two months, MD MICHAEL CARVILL tells LAURA CORNISH.

Kenmare’s WCP A first began mining the Namalope ore zone in 2007, with WCP B commencing mining at Namalope a few years later in 2013. WCP B completed its mine path at Namalope in August 2020, although WCP A and WCP C will continue to mine this ore zone for several more years.

The conclusion of a definitive feasibility study in June 2019 confirmed the technical and economic feasibility of relocating WCP B to a new mining area, Pilivili – at a capital cost of US$106 million – which not only ensures the longer-term sustainability of the greater mine, but also guarantees greater volumes and higher grade material Carvill notes.

In combination with two other growth projects in 2018 and 2019, the relocation project targets a 35% increase in ilmenite production (plus by-products) at Moma from 2019 production levels to 1.2 Mtpa on a sustainable basis from 2021 – and the move of WCP B to Pilivili is the final step in achieving this goal.

The increased production is also expected to significantly lower cash operating costs to between $125 and $135/t (in 2020 real terms).

Consequently, from 2021, the group expects to be positioned in the first quartile of the industry revenue to cost (or margin) curve, supporting stronger free cash flow generation and providing for increased shareholder returns.

While all ore zones within the Moma portfolio were considered for the relocation of WCP B, Pilivili was selected due to the favourable combination of higher grades, strong co-product credits and free flowing sand with low slimes, enabling ease of mining and processing, Carvill points out.

Relocation a success – in spite of COVID-19 challenges

“We reviewed many alternative approaches to relocating our plant – including the disassembly/reassembly of the plant, building a new plant or alternate transportation options for the assembled plant by road and/or sea.

Moving the full plant by road not only offered the lowest risk profile, but reduced our production offline time significantly, from months or years to weeks,” Carvill highlights.

Moving WCP B, which consists of a 1 700 t floating dredge and 7 100t plant, measuring 80 m long, 24 m high and 60 m wide, was no easy feat – and the planning, design and logistics required to transport it some 23 km to Pilivili was undeniably impressive.

As a start, Kenmare Resources had to invest in the construction of a purpose-built road for the transportation of WCP B and its dredge. This was a nine-month process.

The 23 km road is a massive 66 m wide – sufficient to transport the plant without compromising its structure in any way.

(For more information on the detailed process required to relocate the plant, please see the October 2020 edition of Mining Review Africa).

The relocation project kicked off on 28 August 2020 and was concluded in full on 25 October – an impressive feat to undertake while managing the challenges associated with COVID-19 such as social distancing and attaining Visas for high skilled contractors to travel into and out of the country with lockdown measures still in place.

“In spite of this, we concluded the relocation with only minor delays – leaving the team with a great sense of achievement and success when the WCP B reached its final destination,” Carvil highlights.

Crossing a river was one of the major undertakings required to move the plant and required the establishment of an adjacent pond to bring the plant down to the same elevation.

“The original plan was to build a road across this semi wetland marsh area. But the material beneath the road was semi fluid. Having decided that this wouldn’t be the safest approach, we elected to float the plant across by creating a canal.

“The material that needed to be moved in order to do this was however also very soft and so we had to bring in our own material to make a base for our excavator to sit on and mine that material and then the soft material underneath it.

“With the construction of a berm we were then able to break our end point starter pond into the canal and float the plant across,” Carvill outlines.

The success of the project is clearly, and largely the result of the effort delivered by the team to resolve challenges quickly and efficiency, Carvill continues, which encountered various other trials along the way.

Fabrication delays due to COVID-19 was a major frustration and was experienced across many regions including South Africa, Spain, Denmark, Italy and Bahrain.

“Teichmann, our civil contractor for example brought their team to site at an early stage in the project and every member of that team, including their MD Ken Gibbs volunteered to stay on site until completion, this level of commitment was outstanding and contributed to the success of the project.”

Another component of the project – which could have caused delays – was the delivery of an overland positive displacement pumping system which will convey the material from Pilivili back to the mineral separation plant in Namalope.

Delivery of the pipes has unfortunately been delayed. But even this has posed no major problem. Until the system is commissioned – estimated now to be in the first quarter of 2021 – Kenmare is trucking the material along its custom-built road to ensure production targets remain on track.

The supply of electricity to Pilivili was also delayed because the overhead transmission line pylons were also not permitted to travel from the locked down South Africa.

While that has consequently been resolved, Kenmare moved its diesel electric power station from Namalope to operate the plant as an interim measure. The power station has since been transferred back to Namalope.

Ramp-up of the WCP B is now a priority, and Carvill is comfortable with how this progress is tracking.

“We are achieving the higher grades we are targeting and are happy with the plant’s performance since its re-start,” he highlights.

From this point moving forward, Kenmare needs to demonstrate that the plant can operate at a higher level than it has ever worked before – consistently, and so the first six months will be focused on delivering that level of throughput and operational efficiency.

Beyond this the MD notes that there are many more areas of mineralisation at Moma that will be considered for the larger operation. There is also intention to relocate the WCP A to another area within the tenement of Mozambique known as Nataka in 2025.

“We want to continue returning dividends to our shareholders so they are able to benefit from the projects we have implemented and the faith they have given us to deliver on our commitments and we are engaging with our board to determine what is best in this regard as well as for the future,” Carvill concludes.