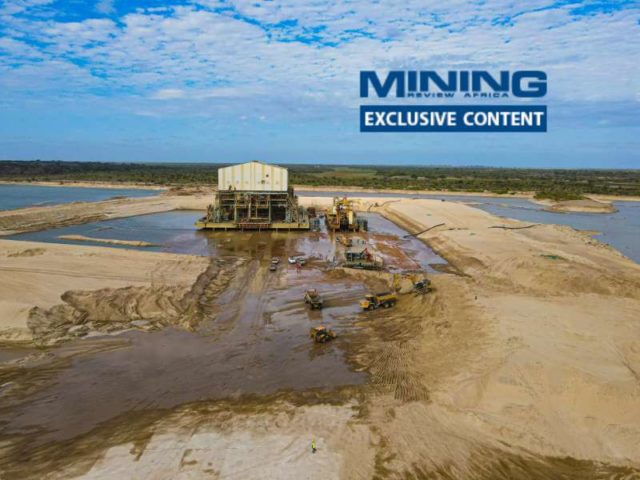 In spite of the operational challenges associated with COVID-19 lockdown, LSE/ISE-listed Kenmare Resources is in the process of executing a large-scale project that is the final step towards increasing production of ilmenite, its primary product, by 35% compared to 2019 at its Moma minerals sands project in Mozambique.

The company is on track to complete the relocation of one of its three mining plants, known as Wet Concentrator Plant B (WCP B), by year-end – a massive undertaking that has only been marginally affected by the impacts of the pandemic.

LAURA CORNISH spoke to MD MICHAEL CARVILL about a project that will no doubt go down in the 2020 mining history book.

The past 10 years have had their challenges for Kenmare, with mineral sands prices falling significantly around the middle of the decade, leading to a restructuring of the company.

“Our action plan in 2016 involved the recapitalisation of the company, including a capital raise in order to repay our lenders, and subsequently reduced our debt by two thirds,” Carvill starts.

Fortunately, since 2016 ilmenite prices have more than doubled and Moma’s production levels are higher thanks to a plant capacity expansion at WCP B in 2018 and the development of a third mining plant, WCP C, in 2019. As such, it is benefiting from the stronger price environment.

In the past Kenmare also had to contend with an unstable electricity supply in Mozambique, but this has now also stabilised, allowing the company to focus intensively on operational excellence and building a balanced and diversified team on the ground.

Kenmare also continues its commitment to being a responsible corporate citizen, with a progressive land rehabilitation programme in place and 90% of its power requirement sourced from hydropower.

But this is only the beginning of a new story for Kenmare, as the company in 2019 was granted board approval to execute its largest expansion project yet.

The conclusion of a definitive feasibility study in June 2019 confirmed the technical and economic feasibility of relocating WCP B to a new mining area, Pilivili – at a capital cost of US$106 million.

In combination with its two other growth projects in 2018 and 2019, the relocation project targets a 35% increase in ilmenite production (plus by-products) at Moma from 2019 production levels to 1.2 Mtpa on a sustainable basis from 2021 – and the move of WCP B to Pilivili is the final step in achieving this goal.

The increased production is also expected to significantly lower cash operating costs to between $125 and $135/t (in 2020 real terms).

Consequently, from 2021, the group expects to be positioned in the first quartile of the industry revenue to cost (or margin) curve, supporting stronger free cash flow generation and providing for increased shareholder returns.

Kenmare’s WCP A first began mining the Namalope ore zone in 2007, with WCP B commencing mining at Namalope a few years later in 2013. WCP B completed its mine path at Namalope in August this year, although WCP A and WCP C will continue to mine this ore zone for several more years.

While all ore zones within the Moma portfolio were considered for the relocation of WCP B, Pilivili was selected due to the favourable combination of higher grades, strong co-product credits and free flowing sand with low slimes, enabling ease of mining and processing, Carvill points out.

An unusual, but smart approach

“We reviewed many alternative approaches to relocating our plant – including the disassembly/reassembly of the plant, building a new plant or alternate transportation options for the assembled plant by road and/or sea.

“Moving the full plant by road not only offered the lowest risk profile, but reduces our production offline time significantly, from months or years to weeks,” Carvill highlights.

Moving WCP B, which consists of a 1 700 t floating dredge and 7 100t plant, measuring 80 m long, 24 m high and 60 m wide, is no easy feat – and the planning, design and logistics required to transport it some 23 km to Pilivili is what impresses.

As a start, Kenmare Resources had to invest in the construction of a purpose-built road for the transportation of WCP B and its dredge. This was a nine-month process but has been completed. The 23 km road is a massive 66 m wide – sufficient to transport the plant without compromising its structure in any way.

To move the actual plant, a very specific sequence of events must take place to complete the relocation project.

First, a starter pond must be constructed adjacent to the existing operation, with supports installed at the base of the pond. The pond will be filled with water and the construction of a berm connecting the two ponds established as well.

This enables the WCP B and dredge to be floated across into the starter pond and onto the supports, where after the water will be drained. “On 17 September we had executed this portion of the project with complete success,” Carvill highlights.

The next steps, some of which have already moved into execution, include a ramp needed to access the now dry starter pond.

Heavy lifting and transport specialist contactor Mammoet will use five trains of connected self-propelled modular transporters (i.e. lowbed platform vehicles with 290 axles in total) to transport WCP B out of its mining pond and along the road until it reaches Pilivili, where it will be offloaded onto concrete plinths.

It will then be floated across a river, thereafter reaching its final destination at the Pilivili starter pond, where it will be ready to begin mining a few weeks later.

New infrastructure is also required at the new site – including electrical power supply connection and a positive displacement pumping system to pump material back to the MSP.

Production for Moma this year will be down as a result of the move and measures implemented to reduce the contraction of COVID-19 on site. The pandemic has also caused some delays to the relocation project, but only minimal.

“Our civil contractor worked throughout the lockdown period but our electrical supply system will be late, but to minimise the impact of this we will start running with diesel electric generators.

“Our new pumping system will also be late but we will truck material back to the MSP for now to avoid feeling the impact of this as well,” Carvill explains.

“Overall, our timeframe to start the project hasn’t changed, with commissioning of the plant at its new home planned for the end of this year, with our 1.2 Mtpa nameplate production targeted for 2021,” he continues.

Importantly, Kenmare Resources has concluded a modified 40 MW power purchasing agreement with local power utility Electricidade de Mozambique, this is an increase in electricity consumption from the +-32 MW of power used at Namalope – necessitated by the power required for the new pumping station, which Carvill believes will take Moma’s total power requirement to about 35 MW.

A project of this magnitude and scale is an impressive feat under any circumstances, and even more so considering the movement restrictions caused by COVID-19.

But with around two years of planning undertaken to lead to the execution of the relocation project, Kenmare Resources has shown resilience and determination to see the project move ahead regardless – and it has, quite literally.