A BUILDER’S WAREHOUSE FOR CRUSHING AND SCREENING CIRCUITS

Like many South African based mining equipment companies, Pilot Crushtec has exported equipment into the rest of Africa for some time. However, CEO Sandro Scherf says this was on the basis of walk-in business at Pilot Crushtec. “If we were approached we were happy to do it, but we did not actively go out and pursue such business.”

This has changed, and Pilot Crushtec is now purposefully pursuing business in the rest of Africa. In the first few months of 2008 alone it sold equipment worth R20 million into Angola, and another R8 million worth into Zambia, where it has supplied Sable Zinc, Vuka mining and Chibulumba. Over the same period it sold R20 million of equipment to companies in the DRC, such as Boss Mining and Tenke. In Tanzania it has supplied over R5 million worth of equipment to companies such as Noremco. 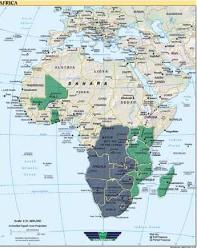 Map of Africa showing
where Pilot Crushtec has
a full and partail presence.

Today, Pilot Crushtec’s breakdown of South African-based to international business is 62% versus 38%. Of that 38%, about 70% is in Africa, compared to 10% a few years ago. The company now has a full presence in Namibia, Angola, Zambia, DRC, Botswana and Zimbabwe, as well as a partial presence in Mozambique, Malawi, Tanzania, Kenya, Uganda, Mali, Ghana and Mauritius.

One of the best signs for the continent is that three to five years ago all of the orders Pilot Crushtec received from Africa beyond South Africa’s borders were mining related, but now about half relate to aggregate. This is a clear sign that infrastructure development is underway, and Scherf says this is a general trend reflected in orders from all countries across the Southern African Development Community (SADC) other than Zimbabwe. In fact, over all markets, including South Africa, the aggregate business is the biggest sector for the company. This is followed by the precious metals, coal and base metals and other solid mineral commodities in that order.

Pilot Crushtec’s change of approach to the rest of the continent is also telling in that it was not one of the early movers into the region, and this was due to the company’s initial experiences. “Peace had come to Angola/DRC in the mid-1990s and we were going to commission a plant in Angola in 1995 when conflict broke out again, and a charter flight was shot down,” Scherf says. “I took the view that I would not send people to places I found it dangerous to go to.” The fact that Pilot Crushtec finds Africa so compelling now reminds us of the genuine progress the continent has made in a decade.

“For one thing the logistics of delivering a plant and getting to the sites is much better than it was a decade ago. Today one can be at a site in the DRC the same day one leaves Johannesburg, whereas a decade or more ago it could take a lot longer to get there. Correspondingly, with this ease of access and the way people are being paid to undertake projects across the continent we are also seeing skilled people on the sites across the various countries of Africa,” Scherf says.

Overall, over the past few years Pilot Crushtec has seen 60% per annum growth, and it recently expanded its factory area under cover by 4,500 m2 to 10,000 m2. This expansion included the installation of 20 tonne overhead cranes to increase the lifting capacity required to build the larger plant it is now undertaking. “We are already looking at further expansion."

However, the growth, which is targeted at 40% this year, is not just due to the mining boom and infrastructure development in Africa. “We are introducing new products, concepts and systems, and have introduced two or three new products this year,” Scherf says. This brings to 65 the number of products in the company’s range.

The company has increased the sizing of its equipment to 500 t/h units. “We founded our business on 10 to 50 t/h units. First we ensure that what we are doing works before we try the next level and slowly we have built up.” The demand for larger scale plants in the industry coincides well with the evolution of Pilot Crushtec’s range. Its largest jaw crushers are now 1.1 by 0.8 metre units and the double deck screens it offers have dimensions of 7.2 by 2.4 metres.

Scherf describes Pilot Crushtec as a sales based organisation. “Our model is to conceive and design products, assemble them, sell them, and provide backup. We don’t do our own manufacture, but outsource this to various fabricators for whom we represent significant contracts.”

The company thus anticipates market demand and stocks the plant it anticipates it will sell. It means the company takes on the risk of planning and anticipating markets, and in May 2008 had about R120 million worth of stock at its factory. This is in addition to the R20 to R30 million of parts and other spares the company keeps in stock.

In effect, Pilot Crushtec can be compared with a Builder’s Warehouse for crushing and screening plants, which are then assembled from components in stock according the requirements of the client. “When an order arrives, we take the pieces and put them together,” Scherf says. Its engineers use the Pro-Engineer package to undertake the plant design, and the company can also undertake the erection of the plant on site.

“The motors are installed only once the order is placed and we know exactly what the client wants. That means we can deliver a large plant within two to six weeks.”

This is an advantage, with contractors increasingly experiencing increases in lead times as supply and manufacturing constraints kick in due to high demand. Even Pilot Crushtec, which has been in business for 18 years, has felt the impact of the high demand for plant and services. “Until about three years ago the fabricators were falling over themselves to do business with us,” Scherf says. That has changed, but Pilot Crushtec has yet to forfeit a deal because it is unable to supply what is required. However, while it can now deliver a plant within six weeks, three years ago it could deliver any of its plants within a week.

At Pilot Crushtec’s factory,
components ready to be
assembled rapidly into crushing
and screening plants upon demand.

Apart from the short lead times due to the approach taken by Pilot Crushtec, which employs about 165 staff, it also does the plant layout and design. By dealing directly with clients, and eliminating a middle man in the form of an engineering company, the client can effectively design project packages without getting a third party do to that section of the plant engineering.

The time saving and the reduced engineering required with the modular approach all save costs that purposebuilt designers of similar plants are unable to match. It means the company has raised the barrier to entry in the market, and this continues to rise as Pilot Crushtec’s internal materials management systems become more sophisticated.

However, Pilot Crushtec has not been able to avoid the cost inflation all suppliers and mining projects are suffering. “The price of steel, one of your major input costs, has gone up by 65% this year alone and it has a big influence, particularly on the competitiveness of local fabricators. We find that imported inflation is about 4%, but the increases locally have been 20% to 40%,” Scherf says.

At the moment, the balance is 50/50 between imported equipment and that which is locally assembled. But Scherf offers an example where the cost of building a jaw crusher in South Africa was up to 50% more expensive than importing one.

“We are already importing from China and if the current price trend continues our imports will increase. The upshot is that the local fabrication industry is under threat of being rendered uncompetitive by steel and other pricing pressures. At the moment we don’t have the infrastructure to get our fabrication done elsewhere, but when we do gain that capability we will import more from the East.”

Another significant trend Scherf and Pilot Crushtec have noticed is the increase in sophistication of the plant being acquired for projects in Africa. “Five years ago it was not desirable to have a complex plant, but rather simple equipment that could be maintained by people on site. However, the skills shortage is having an impact and today the equipment must have more in it. It must be able to tell the users when to change filters and oil, when it is being run too hard and when it needs to be maintained.”

Here the pride of place in Pilot Crushtec’s range goes to its TwisterTrac track mounted VSI crushing plant. It is the first vertical shaft impactor built on tracks on offer to the market and the company has sold some 40 of these units. It is PLC controlled and the company can monitor the plant using an installed GPS transmission system whereby based on the information it can contact the client anywhere in the world from its offices to make suggestions based on monitored usage. “We can phone a client and say, ‘you have been driving your plant a bit heavily; perhaps cut back on certain things for a while’, or we can see that it is not being used and contact the client to see if there is a problem we can assist with.

“We monitor 64 different functions in the engine, hydraulics, and mechanical aspects of the machine. We have been working on this for three years and are finalising a website where one can plan maintenance based on such monitoring functions,” Scherf says