Australian stock exchange listed Gippsland, which is looking to develop the Abu Dabbab tantalum-tin-feldspar project in Egypt, says this project is recognised as the world’s most advanced new tantalum project.

The Abu Dabbab and Nuweibi deposits contain a combined 55 million pounds of Ta2O5, which is sufficient to satisfy entire global tantalum demand for more than a decade. The Abu Dabbab project is scheduled to commence operations at an initial mill feed rate of two million tonnes a year to produce in excess of 650,000 pounds of Ta2O5 a year, which by today’s standards would make it the world’s largest single producer.

The company believes Abu Dabbab will become the world’s largest single producer of tantalum feedstock, and this opinion is supported by some tantalum refiners and electronics industry majors. Gippsland notes that such groups are anxious to avoid involvement with companies and countries supplying what is called conflict tantalum and are turning to emerging conflict-free projects to fulfil a looming supply-side shortage.

There has been an increased international focus on the problems associated with conflict tantalum being produced predominately in the Democratic Republic of the Congo (DRC). Here the trade in conflict minerals is helping sustain a war which has to date caused the loss of about six million lives. 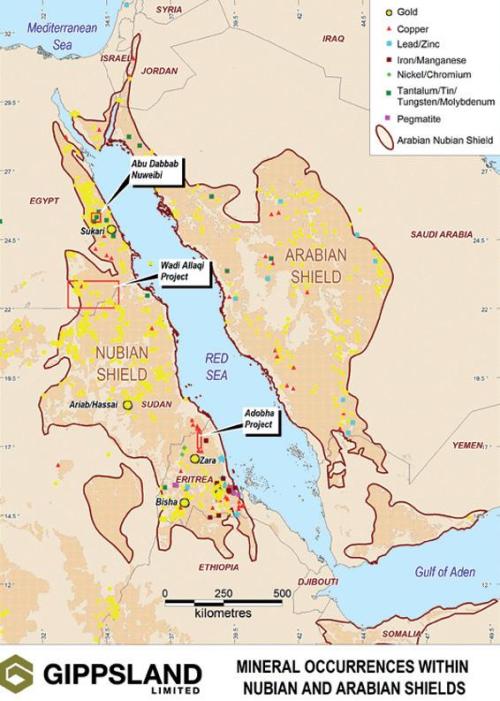 Location of the Abu Dabbab project which will benefit from more stringent action taken against conflict tantalum.

Two bills that went before the US congress to stop trade in conflict minerals from the DRC are expected to have a dramatic effect on the illicit conflict minerals trade worldwide. The bills foreshadow severe penalties for US companies and company executives found to be directly or indirectly involved in the trade of conflict minerals.

In addition, the United Nations Security Council has expanded its area of interest in the DRC to include conflict minerals such that companies found to be providing support to subversive groups through the trade of such minerals may be placed on a sanctions list. That could lead to the freezing of assets and a travel ban for company executives.

Meanwhile the Electronic Industry Citizenship Coalition (EICC), established by the world’s largest electronic companies, met in Boston USA during April 2010 to address the issue of conflict tantalum. The EICC is establishing guidelines under which tantalum smelters must be able to demonstrate that their tantalum product is conflict-free to the satisfaction of EICC members. EICC membership includes Cabot Corporation, HC Starck, Apple, Dell, Nokia, Motorola, Hitachi, IBM, Sony and Microsoft plus Research In Motion Limited.

The increasing constraint on the use of conflict tantalum along with the general tightening supply of tantalum feedstock, saw the spot price for tantalum concentrate (in the form of the mineral tantalite and expressed on a 100% Ta2O5 basis) increase from some US$35 per pound in January 2010 to US$52 per pound in April 2010.

Gippsland reports that the Abu Dabbab project will consume about 18,000 m3 a day of seawater which was to be extracted from a borefield on land some two kilometres from the Red Sea coast at Marsa Abu Dabbab. The Egyptian national centre for planning state and usage has granted the Abu Dabbab project a 40 metre wide corridor approximately five kilometres in length through the coastal tourist zone directly to the Red Sea shoreline, which will enable seawater to be drawn directly from the sea. This much-preferred means of sourcing seawater will eliminate the need to construct and operate some 16 coastal seawater production bores.

Abu Dabbab’s tantalum and tin content is mineralogically simple and is contained in an apogranite in contrast to carbonatite hosted deposits which are by nature more chemically complex and difficult to process. Additionally, Abu Dabbab’s tantalum mineralisation is low in uranium and thorium relative to other primary tantalite deposits. Importantly, the deposit will be mined using simple openpit techniques whilst enjoying an ore to waste strip ratio of 1:0.83.