TSX listed junior explorer Midlands Minerals has focused exclusively on countries which company founder, president and CEO, Kim Harris, sees as among the safest and best in which to operate on the African continent.

Harris, a Zimbabwean who has settled in Canada was undoubtedly influenced by her experiences in her former home country in selecting where to focus.

“Midlands’ exploration strategy is to opt for socio-politically stable countries that are highly prospective and have a history of gold mining,” she tells Mining Review Africa. “We look for countries where one can find high quality projects and ensure tenure under a fair permitting regime. We also look for access to superior infrastructure, access to trained local personnel and importantly areas where there is social acceptance of mining by the local populations.”

Midlands, founded in 2000, had a predecessor company known as Sika Resources. Sika had existed since 1996 with projects in Zimbabwe. That country certainly met Harris’s geological and infrastructural criteria, but the company eventually walked away from its gold projects in Zimbabwe after the socio-political situation there continued to deteriorate.

Existing infrastructure on the Siam
property in Ghana left by Sian Goldfields.

The criteria she uses are strict and eliminate regions such as the DRC and hard to get to parts of northern Canada, but two of Africa’s established gold producers, Ghana and Tanzania, do fit that list perfectly, and that is why Midlands Minerals has projects in each country. It holds some 1,400 km2 of mineral properties in Tanzania and about 300 km2 in Ghana.

Midlands’ properties in Ghana include the near term Sian/Praso project, its top priority. That project could not be better placed in terms of location, situated on the Ashanti gold belt, completely surrounded by and contiguous to Newmont properties and 30 km northeast of Newmont’s 8.7 million ounce Akyem deposit.

“Sian was a past producer and has a 400,000 ounce resource at 2.3 g/t, a processing plant infrastructure as well as mining permits. It is possible to have this project in production within 18 months.”

The formerly Chinese owned Sian Goldfields project stopped production in 2004 following operational problems. The previous operator had designed the pit with a stripping ratio that did not expose sufficient ore, and there were language problems with the mining team, which was brought in from China and housed in isolated conditions. The 500 tonne a day plant, and machinery also brought in from China, suffered from a lack of spare parts. 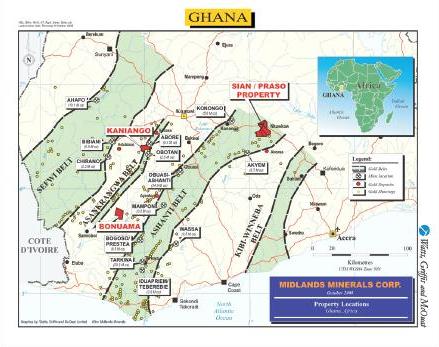 Harris says that the plan is to add to the resource on the 30 year mining licence and define a NI43-101 compliant million ounce gold resource. Midlands acquired the Sian property at the end of September 2006, having owned the contiguous property, Kwahu Praso, since 2001. “However, we needed Sian and we believe we could get to a million ounces very rapidly.

” Over the past 18 months Midlands has undertaken 14,000 metres of drilling, and soil geochemistry and geophysics on Siam/Praso but has covered less than 10% of the property, and in addition to doing infill drilling at the pit where the Chinese mined, Midlands is confident that additional exploration of the 160 km2 property will make it easy to add to the resource. One reason is that the Chinese drilling only went down to 120 metres and the pit was being mined to 20 to 30 metres.Deeper holes done by Midlands below the pit down to 350 metres achieved promising intercepts including 10 g/t over seven metres.

The drilling undertaken by Midlands found five new gold zones over a 16 km strike length and the company has just completed a soil sampling programme extending to the southeast. It has been one of the few in the region undertaking Mobile Metal Ion (MMI) solutions sampling, as part of a SGS testing phase, this method being a pH neutral extraction that aids in the identification of multielement associations for specific styles of mineralisation. It is useful in clayish soil which does not allow for RAB drilling and areas where calcrete covers don’t allow for trenching.

The Sian/Praso project is also a viable near term producer because Esaase, a village on the site, was relocated by the previous owners and the lease has roads, power, and infrastructure. The plant includes 10 CIL tanks, a configuration which can accommodate high processing rates should the milling capacity be expanded. In addition, the plant and facilities are secure and are totally fenced with double fencing.

“There are three main reasons why we believe this is a very promising project,” Harris says. Firstly the NI43-101 block model has calculated for us exactly where to do infill drilling. The Chinese only went down to 120 metres and the orebody is open at depth. Both of these are no brainers in terms of building the resource, and thirdly, we have discovered new zones of mineralisation. Any one of those will add to the 400,000 ounces we already have.”

The project has passed the high geological discovery risk phase, according to Harris, in terms of its outlook which is for an open pittable resource with the potential for it to be a multi-million ounce project, looking across the total property.

Drilling by Midlands on the
Itilima project in Tanzania.

Another promising sign is that soil samples done by Newmont Mining on its neighbouring and contiguous property show the gold values getting better near its border with Sian and Kwahu Praso. Harris says that Midlands has been in discussions with Newmont regarding the 160 km2 Sian/Praso project and discussions are continuing. “Newmont wanted to purchase the property on an earn-in agreement but the terms were unfavourable to Midlands, as a junior with a tighter time horizon. Midlands has to review four to five year earn-ins carefully to ensure they do not result in a sterilisation of the project for a number of years.”

The former Esaase open pit mine
on the Sian/Praso property.

The company’s second priority, also in Ghana is the Kaniago project located between two formerly Resolute Mining projects, the 2.8 million ounce Obotan deposit and the 300,000 ounce Abore deposit. “Kaniago is the project we will work on next after Sian/Praso, and it is situated at the right distance from Obotan for potential discoveries,” Harris says.

After Ghana, the priority shifts to Tanzania where the company has six projects all in the Lake Victoria Goldfields, including the Itilima project located in archean geology and also in the Shinyanga kimberlite field, 25 km to the southwest of the Williamson diamond mine. The Itilima project has kimberlites, two of which are diamondiferous and in general the property has similar geological structures to those found at Geita and Bulyanhulu. “We have drilled an area at Itilima; one RC and one diamond core campaign and have conducted airborne and ground magnetic surveys, having in total spent US$3.5 million on the property.” The drilling took place in an area away from a submarine felsic dome complex. With further geophysical work having identified this structure, future drilling will focus on that area.

Core drilled by Midlands
in Ghana.

“We are ready to drill at Itilima since we know what we have got and where we need more information,” Harris says.“The property requires an investment of about US$5 million for the drilling, but with as little as two million dollars we may be able to delineate an economic resource on Itilima. The drills are on standby, two RC rigs and one diamond drill rig. In the past we had to beg drilling companies for their availability, but the situation has now changed.” 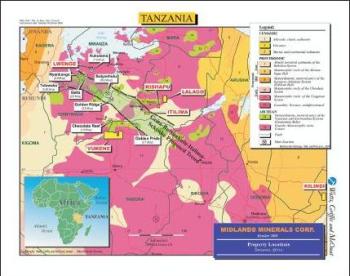 Like many juniors Midlands Minerals, which has historically spent some 85% of its funding in direct exploration, requires additional funding to undertake further drilling, some US$10 million over the next 18 months to further its projects. The company which has five people in its Ghana office including two geologists, and has a geologist and technical support person in Tanzania as well as an office in that country, is busy exploring avenues and options to deal with the drying up of financing for companies such as itself. “It is not advantageous to downsize our local teams in Ghana and Tanzania, since it makes re-entry in those countries difficult. If we got financing immediately we would be able to gear up immediately.

“Debt financing is the least preferable option and a rights issue is an option, though we want to minimise dilution. We have to be open to all options,” Harris says. For a company that is not really looking to be a producer at this stage, it includes joint venturing, or selling a property in order to finance further work, should the right offer come along.