African Eagle Resources, a UK-incorporated mineral exploration and development company operating in Zambia, Tanzania and Mozambique, is well on the road to transition from a junior gold explorer to a developer focused on nickel.

Revealing this in an interview with Mining Review Africa, managing director Mark Parker says the aim of the company in three to five years is to have revenue from its nickel projects, supporting a pipeline of further developments and discoveries. “Our strategy is to generate this revenue as quickly as possible by bringing one or more projects into production, probably through development partnerships with suitable industry partners.”

“We made our initial decision to focus on the Dutwa nickel project in Tanzania, and at that stage put the others on the back burner. Obviously that situation could not persist forever, so we are now divesting those projects in one way or another.

“Our aim is to find partnerships and deals with partners who will be committed to progressing the projects, and also to giving us fair value for the investment in time, money and intellectual property that we made in them,” Parker says.

“So we are currently negotiating the disposal of all of them, with four agreements signed up so far – two gold agreements in Tanzania and two agreements on projects in Mozambique. There are several parties currently doing due diligence on the technical, and in one case on the legal, aspects of our Zambian copper projects. Once they complete that aspect we will negotiate a deal if they want to go ahead,” he continues. 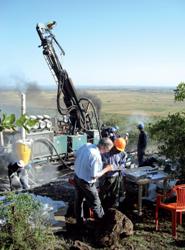 The smaller Igurubi gold project in the Lake Victoria Goldfields of Tanzania, on which African Eagle had no JORC-compliant resource, although it did have an internally generated deposit model with about 700,000 ounces at 2.5 g/t, has been sold to an Australian company called Peak Resources.

“Payment for the deal is in Peak Resources shares as they reach various landmarks on the project,” says Parker.

“They have three months to do a preliminary assessment, after which we get the first tranche of shares. Then on the delineation of the resource we get another tranche of shares, and then finally on first production we get a payment as well. The deal is worth about US$3.5 million to us.”

African Eagle’s partner in the Miyabi gold project, also in the Lake Victoria Goldfields of Tanzania, is Macquarie Harbour Mining, a fairly diversified Australian metals group with whom the company has a letter of intent. “Their intention is to get into production as quickly as possible, and they will complete a feasibility study for that to earn 75% of the project,” Parker says. “The cash we have put into exploration will be fully credited against the cost of building the mine, and with the type of operation Macquarie has in mind, that means a free carry for us to production,” he predicts.

“This deal values the project at about US$26 million as it stands, and it gives us a quarter of that. This means the two projects will be worth a combined total of about US$10 million to African Eagle. Furthermore, it takes the whole of the exploration and development of those projects off our hands,” Parker says.

“In Mozambique we have a precious and rare metals project in which we have signed a partnership agreement with an Australian outfit called Pacific Wildcat, which has a majority interest in the nearby Muiane tantalum mine. They have worked out that there are additional tantalum resources on our property, so they are earning an 80% interest in those by doing the exploration there, with a view expanding production in the area using the Muiane processing plant,” he explains.

“As far as our uranium holdings in Mozambique are concerned, we are still involved in negotiations, but I think we are pretty close to an agreement,” Parker says.

“In Zambia, we have had a good deal of interest in our copper holdings, and we have concluded confidentiality agreements to provide the data to several groups. One of those groups is also doing legal due diligence, and we believe that a deal is not too far away with at least one of the interested parties on the Zambian projects,” he adds.

“We would prefer to sell the Zambian projects as a package for obvious reasons of convenience, but we have had some very interesting offers for individual projects, so we may go by a different route,” Parker suggests.

“Our investments in Zambia consist of two in the Copperbelt – Mokambo and Ndola – then we have Mkushi, which has a feasibility study on it, and we have a partnership there with CGA – an Australian-based mining group. They hold 51% and we have 49%. CGA is in the process of spinning Mkushi and other assets in Africa into an IPO on Toronto, called Ratel Gold Limited, and will then revisit the feasibility study we did in 2008, making some modifications.

“A lot of the uncertainty that was present when the draft feasibility was delivered at the end of 2008 has now resolved itself. The copper price has gone up a fair bit, the banks have started lending again. The revised study should look much better than the original,” Parker believes.

With the divestment strategy far advanced, African Eagle can focus on its nickel projects in Tanzania, and the company has made Dutwa, located in the Lake Victoria Goldfields, 100 km east of Mwanza, its priority project.

Dutwa has a recently updated JORC inferred main resource of 56.8 million tonnes. Nearby Ngasamo’s confirmed JORC inferred resource is 35.3 million tonnes, giving a combined total of 92.1 million tonnes, which contains 845,000 tonnes of nickel. “We did the drilling there as part of our earn-in on Ngasamo, which belongs to the Tanzanian subsidiary of a Czech company in the precious metals refining business,” Parker says.

“We believe the capital cost of the project will be of the order of US$400 million, depending on the processing route we take, which won’t be decided until the next set of metallurgical test results are through,” Parker explains. “We still have a way to go to pin down our operating costs, but we believe that the cash operating costs are going to be somewhere around US$3 to US$3.50/lb.

“The feasibility is likely to be completed by late next year, followed by a final decision towards the end of the year. It’s a fairly significant construction project. I think we will need about two years to complete it. That takes us to the end of 2013, so we are talking about 2014 before the commissioning and production start-up,” Parker calculates.

“We are looking at milling maybe 2.0 million tonnes a year, which would yield 20,000 tpa of nickel and 3,000 tpa cobalt in an intermediate product. That was the assumption made in the scoping study, and will be revisited by the bankable feasibility study in view of the much increased resource. Life of mine was expected to be about 20 years, but this may increase now” he adds.

“We are prepared to take the project through to production of course, but the big fat cigar would be an acquisition by one of the majors, which is what often happens when a junior like ourselves has de-risked a worthwhile project and proved that it does work,” Parker says.

“As far as extending life of mine is concerned, we have identified another large laterite called Zanzui, which is about 60 km south of Dutwa. We are busy with a resource drilling programme there – certainly the laterite is very large, but how much of that is nickeliferous is the question. We should have these results by the third quarter of 2010,” he predicts.

“There’s plenty of scope for economies of scale if we develop Zanzui as well, but the degree of integration of the two operations would depend on what we find metallurgically and geologically. It will probably be a year before our exploration at Zanzui can catch up with Dutwa.

“Value of contained metal is not necessarily a good guide to viability, but certainly as a first order of approximation it’s quite handy to know what you have got in the ground, and at current nickel prices we’ve probably got somewhere around US$16 billion in contained nickel in the ground at the Dutwa and Ngasamo projects combined,” Parker confirms.

“The scoping study estimated that, at today’s nickel price, the net revenue over the life of mine would be about US$2.6 billion.

“We see ourselves as being in transition from being an explorer to becoming a mining company, but most likely in partnerships with mining investors. Our aim is to end up with substantial minority stakes in these projects that would give us cash flow to pursue our exploration programmes,” Parker reiterates.