The AK6 diamond mine in Botswana, which will be one of the top five hard rock diamond mines in the world in terms of profit/revenue ratio, is on track to launch commercial production in the final quarter of 2011.

It is scheduled to produce 660,000 carats in 2012, bringing in revenue of US$128 million, says James Campbell, managing director of AIM and Botswana Stock Exchange-listed African Diamonds (AFD), which is a 40% partner in the Boteti joint venture – full owner of AK6. The other 60% was purchased from De Beers for US$49 million late last year by TSX listed Lucara Diamond Corporation, which is part of the US$10 billion Lundin group of companies.

Campbell tells Mining Review Africa that Boteti has initiated a feasibility study update for AK6. “We are working flat-out on the update, which is scheduled for completion in the second quarter of 2010,” he adds.

“Lucara and ourselves are working on the project very well as a team, and our agendas are completely in tune. We want to put the mine into production as quickly and as efficiently as possible, and to meet nameplate capacity.

“In terms of profit to revenue ratio, you are looking at an average grade of 22 carats per hundred tonnes (cpht) and a price of US$194/carat, which works out at a revenue of US$42 to US$68 per tonne in the ground. And if you look at the capital cost of US$88 million and an operating cost of about US14/t, the gross margin is more than US$28/t. That is why it is regarded as one of the top hard rock mines in the world,” Campbell explains. 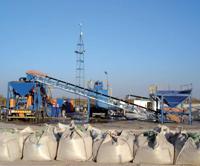 Capital costs for the mine are US$63 million for phase one and US$25 million for the second phase. The study Lucara and AFD are about to publish is an update, because much of the earlier De Beers work is being used. Aspects like the geological model, the volume model, the density model, the geotechnical model, and the hydrogeological model done by De Beers earlier are all at feasibility study level.

“What we are completely redoing is the plant design, and the infrastructure associated with the plant design, as well seeking out suitable mining contractors. The study will confirm capital costs and provide a definite time schedule up to production,” Campbell says.

“We have planned a four-month series of early works over the June to September period, involving things like placing long lead-time orders, site work and access roads. We will also use that time to raise project debt, and at the end of the four months we will hopefully have enough project debt to be able to start implementing the mine, which will be in production in the fourth quarter of next year.

“We have started approaching banks from the corporate debt perspective already with what we call pre-marketing; we hope to have established which consortium of banks we are going to talk to when we actually publish the feasibility study,” Campbell explains.

“We have to present our feasibility study giving the definitive dates to the minister, and he will then amend the relevant clause in our 15 year mining licence to reflect when we actually start. There will be no government equity in the project. Also, we have had discussions with the government of Botswana on the subject of a marketing plan, and it looks as if we will be using an open tender system. We are currently seeking proposals from people skilled in running such systems,” he says.

The indicated resource for AK6 down to a depth of 400 metres is 51.2 million tonnes at an average grade of 22 cpht, yielding a total of 11.1 million carats. The modelled diamond value of US$194 per carat gives an overall value of US$2.14 billion in the ground.

Then there is an inferred resource between 400 and 720 metres below ground of 20.9 million tonnes at an average grade of 19 cpht and a diamond value of US$183 per carat. This gives an additional US$732 million in potential earnings.

“Production plans are for an annualised throughput of 2.5 to 3.0 million tonnes, ramping up to 4.0 million tonnes a year in phase two by 2015. In terms of actual diamond production, this will mean starting at some 660,000 carats a year from the end of next year, rising to 880,000 carats a year at full production,” Campbell predicts. “Our first diamond sales will only be in the first quarter of 2012.”

“One must bear in mind that we have used the De Beers grades in our calculations,” Campbell points out. “We haven’t touched those in our later work, but we believe from work we have done that in the north and central lobes, which are the two smaller ones, the grade could be between 10% and 20% higher, and that in the southern lobe it could be up to 40% higher,” he suggests.

In due course, therefore, it is expected that AK6 could produce an annual million carats of diamonds which could realise over US$200 million a year.

The other issue concerns what will happen to diamond prices. “As we know, they dropped by 50% in 2008, but they appear to have made up most of that loss. Predictions are ranging between 1.5% and 7% real diamond price growth year on year, and my personal and modest opinion is that it will be between 2.5% and 3% real growth,” Campbell estimates.

Looking ahead, there are clear indications of a strong possibility of extending life mine at AK6 when the time is right.

“AK6’s projected life of mine in terms of the figures I have given you is about 9.5 years,” he says. “But I must emphasise that this takes us to a pit bottom of 336 metres, and as I mentioned earlier, we have a resource down to 720 metres. We would certainly look at some deepening of the pit, and possibly even an underground operation,” he proposes.

“This would obviously only come into the picture after several years, but it is comforting to have that additional resource in the bag. It actually means the mine could easily at least double its life. The point is that expansion at AK6 will be downwards, not lateral.”

Looking further ahead, African Diamonds holds several other prospecting permits in the country regarded as the world’s best diamond address, and it has work programmes either planned or on the way.

“I am referring in particular to three other Kimberlites – AK8, AK9 and BK5 – which are the key exploration targets now that AK6 has moved into development,” Campbell reveals.

“AK8 and AK9 both have diamonds in them. The key issue there is that we don’t have any idea at this stage about what the dollar-per-carat diamond value is like. So we have to take sufficient bulk sample to get an estimate on the diamond quality,” he says.

“We really only need about US$6 per tonne in the ground, because then we can ship it to the nearby AK6 plant for treatment. This means the probability of them being economic is so much higher now that we have a focal point on AK6,” he says.

The company recently undertook a fundraising exercise and was originally looking to raise US$12 million, with US$8 million to be used to pay for its 40% option in Boteti. Another US$2 million is for its contributions towards the bankable feasibility study and the early works. The balance of US$2 million is intended for exploration of AK8, AK9 and BK5, as well as working capital.

As it turned out, AFD exceeded its target and raised US$14.5 million. Campbell says the additional funds raised will give AFD some headroom on the development of AK6.

“We still have to do geophysics to determine the size of BK5. De Beers did some work, and the geophysical data suggested that it was about 3.5 hectares in size, but later work has shown that the kimberlite could be double that size at seven hectares,” he says.

“We are looking at using the US$3.2 million available to take all three prospects further along the long road of exploration, pre-feasibility, feasibility and a definite indicated resource, before making final decisions to mine. We would only be looking at production from these three deposits when we are at least halfway through the current 9.5 year mine life of AK6, which means around about 2016,” Campbell concludes.