Petmin, which produces quality anthracite and silica, has ambitious plans in the next five years to double production at its two existing mining operations in South Africa, and to grow the company substantially through new projects in Southern Africa, and possibly overseas.

Listed on the JSE since 1986 and the AIM since 2006, the company holds two operating assets – the SamQuarz silica mine in Mpumulanga and the Somkhele anthracite colliery in KwaZulu Natal. It also has an effective 34.9% interest in one development project, the Veremo pig-iron operation in Mpumulanga.

“In the last six years Petmin has grown from a very small R24 million cash shell to a company with a market capital of R1.5 billion,” new executive chairman Ian Cockerill says. “Now we want an organisation in five years’ time that is worth significantly more than today,” he tells Mining Review Africa.

“This can be achieved partly through expansion of current operations, but there are limits to the increase in value that you can extract from your existing business. You have to look outside the parameters of your existing business and then determine what is going to help you fill the gap,” Cockerill explains. 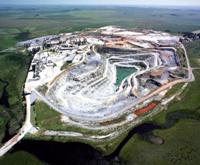 “We believe that both SamQuarz and Somkhele have the scope to double in size from their current levels of production. In fact, I would argue that the limits to expansion in both of those projects are far more market-related than operationally restrained,” Cockerill says. “We could produce three or four times the amount of anthracite from Somkhele – the issue, of course, is whether we can sell it.

“We can expand our markets by beneficiating our current products further, creating high value niche products. In this regard, calcining represents an ideal process, and our test results to date have been very positive,” he says.

“I would be disappointed if we don’t announce the intention to double Somkhele within the next 12 months,” Cockerill contends. “I think there’s still some headscratching to be done regarding SamQuarz, but we will make a decision on SamQuarz as well within the next 12 to 18 months.

“The cost will not be huge. We are talking maybe R50 million at SamQuarz, and possibly R185 million at Somkhele for a second wash plant and calciner. It would be quite cost-effective, and could be done fairly quickly,” Cockerill says.

Looking at Petmin’s three projects, first is its SamQuarz silica mine in Mpumulanga, which is the largest producer of high-quality silica in South Africa.

”We produce 1.3 million tonnes per annum (mtpa) of ROM product, which then converts into about 1.2 mtpa of saleable silica that gets distributed in various forms. The important aspect of SamQuarz is that while there are other silica producing mines in the country, they produce what is known as amber grade – in other words silica which is not of sufficient quality to produce clear glass – but SamQuarz does,” Cockerill explains. “And because of its position it is a key strategic producer and supplier to the likes of Consol, PFG, Nampac and the other main glass producers.

The SamQuarz reserve can handle its current production rate for a life of mine in excess of 40 years.

Petmin’s second operation is the Somkhele anthracite colliery in KwaZulu Natal. Commissioned in June 2007, it is one of the country’s largest producers of high-quality anthracite for local and export markets.

“Somkhele has plant capacity of about 1.4 mtpa of ROM anthracite, and produces more than 1.0 mtpa, which yields just over 600 000 tpa of saleable anthracite. We have done all the civils to double capacity, but we only installed sufficient capacity for half,” Cockerill says. “For us to double capacity to 1.2 mtpa saleable, it’s just a question of buying kit and installing it. 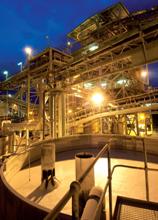 “With this project we have 40 years of mine life from the existing reserves. If we double production that reduces life of mine to 20 years, but we have only scratched 10% of our lease area of about 27,000 hectares to achieve this.”

Petmin’s new project under development is the Veremo pig iron project in Mpumalanga, in which the company acquired a 34.9% effective participation in November 2009.

“This is a huge resource. Just the combined weathered material resource blocks add up to 73.35 million tonnes measured and indicated, and it contains approximately 43% of Fe,” Cockerill says.

“The original project plan estimated commissioning of the project in 2013/14, although I suspect that this might be pushed out a little. But that does not matter because even if it is delayed, Petmin receives a guaranteed dividend of R65 million a year (from 2012 to 2013 inclusive), although we would much rather see it move into operation.”

There is potential for production of 1.0 mtpa of pig iron from Veremo over a life of mine in excess of 50 years, and all the development capital is to be paid by the majority partner, Framework Investments, a subsidiary of the LSElisted Kermas group.

In terms of other future investments, Cockerill says, “What we are looking at, in terms of the value curve, is a mix of cash producing assets and projects with a diverse geographic spread in commodities that that feed into infrastructure growth and urbanisation, in essence the steel value chain. Products like metallurgical coal, PGMs, copper, manganese and ferrous – those are the areas that we are concentrating on.”

This is not confined to South Africa. “We have a good solid base here in South Africa, but we see moving into Southern Africa as an obvious and logical progression. We are also not averse to seeking opportunities outside Africa elsewhere in the world if we felt we could operate there,” Cockerill continues.

“I am not sure if current commodity prices are sustainable, but even at more sensible long-term prices we do see some very attractive long-term opportunities in the commodities I have mentioned. I will be disappointed if, in the next three to five years, we haven’t added at least another two commodities to our portfolio. This will give us commodity diversity, and possibly even the geographic diversity that we are looking for as well. That’s how we want to grow our value in the next three to five years.

“This could well involve joint ventures, acquiring existing assets, or possibly even rights to develop projects. We also don’t discount mergers with other companies if we believe they will be in our interests,” he says.

“After a lengthy assessment process in which we identified and reviewed 70 to 80 opportunities, we have zeroed in on about half a dozen of them that we think offer some realistic potential. We are now starting to examine the select few in more detail,” he says.

“The way to guarantee results is to make sure you are in the right space, and we definitely believe that the carbon-steel value chain is the right space in which to be. Commodities related to infrastructure – that’s why we like the ferrous space, the metallurgical coal space, manganese, copper, and even PGMs,” Cockerill reiterates.

“My vision as new chairman would be to take this company within a five-year framework to become a significant and important intermediate mining company that has a more global presence, is a significant player in the infrastructure space, and has added significant value for shareholders. The challenge now is finding the opportunities, and then execution,” Cockerill concludes.