Johannesburg, South Africa — MININGREVIEW.COM — 8 February, 2008 – Aquarius Platinum Limited –a focused platinum group metals producer in southern Africa, and listed on the Australian, London and Johannesburg stock exchanges – is living up to its reputation as one of the world’s fastest growing platinum companies.

The company has interests in five operations – four on the world-renowned Bushveld Complex in South Africa, and the other on the Great Dyke in Zimbabwe.

Most impressive production increase was at Marikana, where P and SA2 underground development has been ramping up. Production rose 45% from 69 941 to 72 944 PGM oz

Continued ramp-up at Everest lifted production in the period under review. Production rose 15% from 82 908 to 95 560 PGM oz. At Kroondal production dropped 13% from 238 902 to 208 035 PGM oz, but significant underground development was completed.

Meanwhile Aquarius has entered into a binding agreement for the acquisition of a 50% interest in the Platinum Mile Resources (Pty) Ltd mine wastage processing project for R420 million. The shareholding will be acquired from a consortium of private investors and Mvelaphanda Holdings (Pty) Ltd. 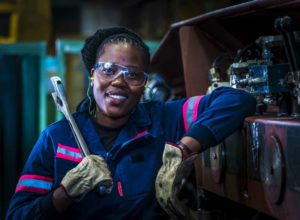