Johannesburg, South Africa — 19 February 2013 – Leading South African diversified mining and minerals company African Rainbow Minerals (ARM) has announced that it expects headline earnings per share for the first six months of its 2013 financial year ended 31 December 2012 to decrease to between 630 cents and 675 cents per share (1H FY2012: 937 cents per share). That’s a drop of some 28 to 35%.

In terms of paragraph 3.4(b) of the Listings Requirements of the JSE Limited a listed company is required to publish a trading statement as soon as it is satisfied that a reasonable degree of certainty exists that the financial results for the period to be reported on next will differ by at least 20% from those of the previous corresponding period.

The ARM statement explained that the interim results for the six months ended 31 December 2012, in comparison to the corresponding six months to 31 December 2011, had been negatively impacted by the fall in realised US Dollar prices for iron ore, coupled with above- inflation unit cost increases at some operations.

This had been partially offset, however, by improved performances at the Nkomati nickel mine, ARM Coal, and increased sales volumes for nickel, iron ore, Eskom thermal coal, export thermal coal and platinum group metals. The weaker Rand/US Dollar exchange rate had a positive impact on the interim results for the period ended 31 December 2012.

The financial information on which this trading statement was based has not been reviewed or reported on by the external auditors of ARM. The company’s interim results will be released on Tuesday 26 February 2013. 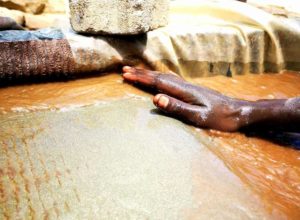