Axmin’s most advanced project is the Passendro gold project in the CAR, where it has begun preliminary work towards establishing a mine, while it waits for permitting and then financing to be finalised.

Earlier this year Axmin reviewed its 2008 feasibility study of Passendro, and this revision has led to a smaller scale project that brings down the capital cost to US$127 million, a decrease of 35%. This was done by reducing the size of the project from three million tonnes per annum (tpa) to about 1.3 million tpa for a planned output of 100,000 ounces of gold a year. This gives an 11.5 year life-of-mine, compared with the previous 5.9 years, and predicts a payback period of just over two years.

The predicted operating cost is US$431/oz, which is higher than that of the larger initially planned operation. But this number is based on an oil price of US$80/barrel, and there is scope for lower operating costs. For every 10% reduction in price of oil, operating costs decrease by some US$13/oz. 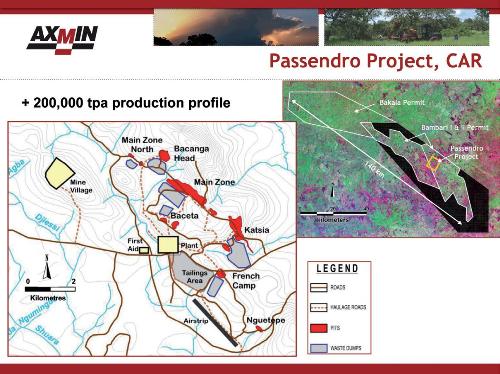 President and CEO of Axmin, Mario Caron says, “We considered it prudent to evaluate the Passendro project at a reduced scale given the inherent status of project finance in the current economic climate.” He says the project remains robust at this scale and there is the added benefit of an overall attractive risk profile as mine life is increased and the construction period timeline reduced.

Higher grade feed in the first four years allows for production levels averaging some 125,000 ounces of gold a year. It offers the option to subsequently expand the plant to handle lower grade ore and any additional resources that may be added through exploration.

Axmin holds a dominant position across the 140 km long greenstone belt in the CAR that hosts the Passendro project. While the company holds a large land package in the region, the bulk of its exploration to date has been in the Passendro area. Axmin is progressing discussions with the CAR government in terms of its mining licence application.

South African project company Senet undertook the feasibility study for Passendro in 2008, as well as the revised study that was completed earlier this year. The study also incorporates a section on mining completed by SRK Consulting (UK). Caron says that while the EPCM contract has not been awarded, Senet, due to having done the feasibility study, would logically be in a strong position.

Other changes to the project from the bankable feasibility study done a year previously see the stripping ratio decrease from 8.4:1 to 7.5:1. The original project proposed annual production of 200,000 ounces of gold, double that of the currently envisaged project. 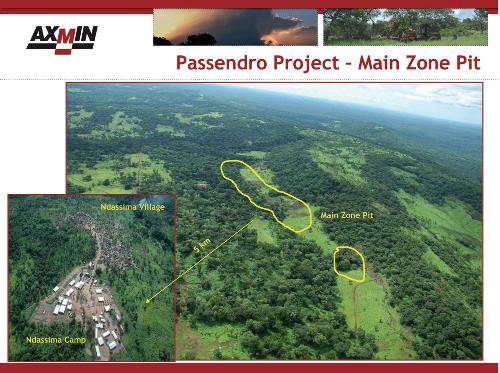 View of the Passendro project site.

The project is based on a measured and indicated resource of 1.8 million ounces of gold at a grade of 2.4 g/t. This resource is derived from prospects that lie together within a three kilometre radius. It includes oxide, transitional and sulphide material. The mineable reserve established for the study done this year is 15.6 million tonnes with a grade of 2.42 g/t for 1.2 million ounces of gold to give the 11.5 year mine life.

Conventional open pit mining techniques, from a series of pits, using shovel-truck methods are proposed to provide plant feed at a rate of between 1.5 million (oxides) or 1.0 million (sulphides) tonnes a year. It is envisaged that owner operator mining will be undertaken.

The bankable feasibility study metallurgical test work classified the Passendro orebodies into soft, medium and hard ore, all of which is amenable to treatment through a gravity and leach carbon in pulp process plant, with anticipated average gold recovery of 94%.

This process route in the revised study is essentially unchanged, other than the scale. The reduced throughput allows for modifications to the crushing circuit with significant reductions in civil engineering, and to the milling-gravity circuit where the SAG-ball mill combination has been reduced to a crush-ball configuration. Modifications to the gravity section enhance the recovery of free gold.

The installed power for the operation will be about 7.5 MW, and will comprise gensets using heavy fuel oil. Water supply will be sourced from rivers in the area.

It is assumed there will be a soft start approach to the project. This includes some pre-engineering, followed by early ordering of major equipment and site preparation. This could reduce the construction time for the reconfigured project from the originally projected near 24 months to about 12 months. 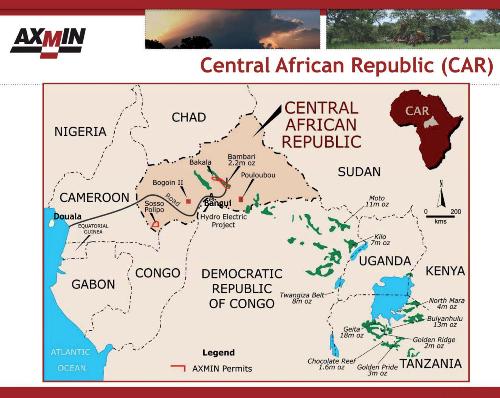 Location of Axmin’s projects in the Central African Republic.

The company was completing a national instrument 43-101 mineral resource update at Passendro during the second quarter of 2009. This update will integrate the drilling completed subsequent to the mineral resource estimate that was used in the bankable feasibility study, and includes some 16,500 metres of core, of which nearly 14,000 metres was completed along the project’s 4.5 km long main zone structure. The results and interpretation from the drilling suggests that the indicated resources could increase and may simplify subsequent pit designs.

The project will be a groundbreaking one for the landlocked CAR, with its population of four million people, a country that many see as a buffer between the DRC to the south and Sudan and Chad to the north. Passendro will be fairly self-contained, with its own air strip, power generation plant and accommodation for workers.

The area where the mine is to be established has had no long term permanent population, and there is no social impact in terms of moving people. The nearby Ndessima village did not exist until the arrival of Axmin in the area.

While the project awaits its mining license it is working on optimising the fleet design and upgrading bridges to bring in mining equipment; the alternative would be not using the optimal equipment size for the project. Caron says that some of the main challenges are logistical, with equipment and materials having to be brought in via the Cameroon port of Douala. The company had some 75 people working on the project in the CAR, but cut back significantly on manpower and activity to preserve cash once the financial crisis became clear.

KOMAHUN PROJECT IN SIERRA LEONE
Axmin announced earlier this year that the outcome of its scoping study for the Komahun gold project in Sierra Leone was positive and the project has potential for development as an underground mine targeting 50,000 ounces a year. The study justified the expansion of drill testing of the deposit at depth, to about 500 metres below the surface, with the objective of increasing resources by 100,000 to 200,000 ounces and adding years to the potential mine’s life.

The scoping study considered an industry standard process plant encompassing gravity and leach and carbon-in-pulp circuits. The base case capital cost has been estimated at US$69 million, which includes US$14 million for underground mining and US$5.3 million for life of mine sustaining capital. 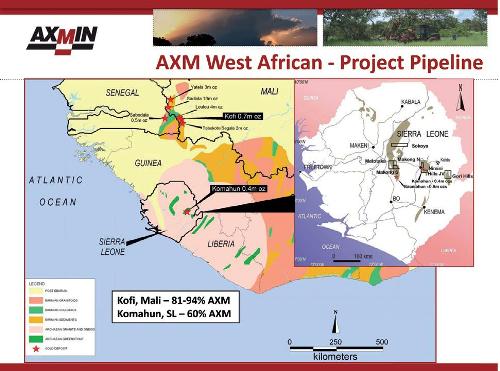 Location of Axmin’s projects in Sierra Leone and elsewhere in West Africa.

Power would be from stand-alone heavy fuel oil generators. Metallurgical recovery is assumed to be 92% as determined by preliminary test work.

The main zone orebody that outcrops close to the summit of a steep ridge which lies about 120 metres above the surrounding valley, facilitates underground development. SRK recommends a shrinkage stoping method with decline access to provide the most cost effective solution to mining.

The Komahun project occurs within a greenstone belt in eastern Sierra Leone. Although comprised of several centres of gold mineralisation within a three kilometres radius within the Nimini permit, it is only the main zone of the Komahun project that has been incorporated into the scoping study. With time it is expected that additional zones of mineralisation may add further to the potential of the project.

The Komahun gold project lies within the Nimini Hills licences which are held under a joint venture agreement with Afcan Barbados, a subsidiary of Eldorado Gold Corporation. Under the terms of the joint venture, Eldorado elected not to participate in ongoing exploration expenditures. As a consequence Axmin may increase its level of ownership in the project from 60% to 80% by completing a bankable feasibility study.